"What Goes in is What Goes Out" by Ian Todd 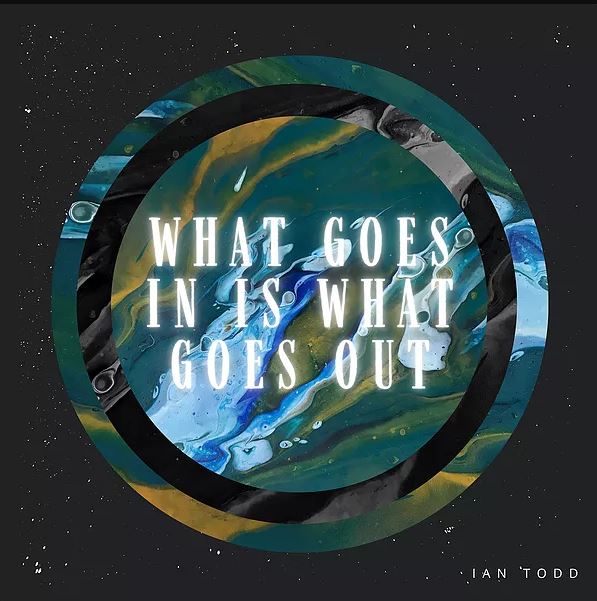 The time is rapidly approaching (16th of July to be precise) when "What Goes in is What Goes Out", the sophomore single from his ‘Seven Signs of a Soul' album  (itself out on 6th August) by Ian Todd is released.

Following the really well received "Don't Forget To Breathe" from last month, it shares in some ways the theme of cognition but in this case moves from the idea of mindfulness to a rumination upon the processing of information & imagery and hence is concerned mainly with tracking down the roots of creative inspiration. To that end, we might well wonder whether Ian is carrying out this particular exercise on his own behalf initially & then sharing the results of his introspection with his audience.

"Immersive songs to soothe the soul" is his mission statement and this sort of contemplative experience is pretty central to what he is trying to enable with his music. To this end, he tries hard to distinguish his solo music from his work with say Shanghai Hostage where the accent is on provoking dancing and to not have it categorised as "pop". However, as my review for the earlier single pointed out, Ian has innate popular sensibilities which he cannot eradicate from his creation & these are present in "What Goes in is What Goes Out". Indeed when I first heard the introductory chord, I was struck by its similarity to "The Kids Are Alright". Admittedly it's just one chord & the rest of the song shares no great kinship with The Who, yet it's interesting how he still reaches out to grab our attention in a way which pulls us into the song.

Thankfully, once he's hooked us, he keeps us within it too. The song switches into a vibe not wholly unlike The Doors at their most laid back, with an incessant shuffling beat punctuated by an almost bewildering number of instrumental interventions: I'm guessing originating on guitars & various percussional items. The lyrics are a good match in terms of quality & this really is a song you need to play & replay in order to appreciate all the details and derive the full meaning of the words. It's a handy thing to be able to write a song which makes you want to go back and rerun it. Listen out too for the contributions of John Parker (double bass) and Kirk Hastings (saxophone) both of whom also played on the previous single & like Ian are "Hot Music Live Presents" alumni.

Please do not consider Ian's solo work as some sort of avant garde alternative to his more mainstream collaborative efforts: this is simply not true (though possibly "Hour Glass" might be of that ilk). If you enjoyed his "Citizens of Nowhere" on ‘Hot Music Live Presents Volume Three‘ then I think you'd be at that realisation already. However, although I said last time that "Don't Forget To Breathe" was "accessible and memorable", I feel that "What Goes in is What Goes Out" is even more so: there is no barriers that I can think of as to why this cannot gain appropriate & broad airplay nor to move on from there to capture some part of the public imagination. It makes you tap your toes & think at the same time.

Since we are still a fortnight away from release, I'm more aware of the music than all the accompanying visuals, but judging from the "Don't Forget To Breathe" experience, I'm anticipating similar input from the likes of Diana Stefanescu aka Dikira Art & Emilié Cotterill of Transluceo.

Sadly, my live reviews for 2020 & 2021 have been disproportionately outnumbered by my reviews of releases (and let's not forget the last word of ...
[3 images] END_OF_DOCUMENT_TOKEN_TO_BE_REPLACED

As prophesised in our recent reviews of his singles "Don't Forget To Breathe" (in June) and "What Goes In Is What Goes Out" (last month), the ...
[1 image] END_OF_DOCUMENT_TOKEN_TO_BE_REPLACED

Having reviewed "Hour Glass" (an hour long ambient piece ) by Ian Todd last summer, I am now pleased to say that I can return to his work again, this ...
[2 images] END_OF_DOCUMENT_TOKEN_TO_BE_REPLACED

Keen readers of this magazine will recollect the February feature  of Ian Todd & even keener ones will have spotted his name amongst the details of ...
[1 image] END_OF_DOCUMENT_TOKEN_TO_BE_REPLACED

We cover so many multi-talented artists in "Hot Music Live": not just musicians but the photographers, visual artists & producers whom they work with.
[1 image] END_OF_DOCUMENT_TOKEN_TO_BE_REPLACED