"Pray With Me" by Chasing Deer 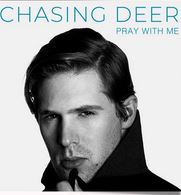 I have not had a chance to review a Chasing Deer release for you since "Scared" came out in December, so I'm pleased to do so now in reaction to the new single called "Pray With Me".

During that time, Rob Hodkinson has however certainly been very busy: I am not sure he has missed a single weekly livestream since the pandemic began and he has also taken the first steps back into live performance: the rock upon which the Chasing Deer reputation was built. In fact he is playing at the Botanist in Coventry as I write this.

I'm sometimes not quite sure anymore whether to use the singular or plural about the band since circumstances seem to have (for the time being at least) to have reduced them down to just Rob plus his guests for gigs and recordings: that is how "Scared" had to be created. However in this particular instance, the recording is a full band effort as it dates back to their Siena sojourn of 2019 when they recorded four tracks at Virus Recording Studio in Monteriggioni with Alessandro Guasconi and with Oliver Basi as their producer..

The story therefore of this single in some ways encapsulates the effect the pandemic has had on artists. This was intended as a very special session, to build on their rapidly growing profile and fanbase, to create some top notch tracks to release in 2020, kicking them into the next level of their career. That sensibly was put on hold (promotional activity opportunities being so limited in scope almost certainly would have reduced the impact of the singles) and it is greatly to Rob's credit that he has played much more than a holding game in keeping the name in our minds until the time to start sharing the fruits of the Sienna sessions has arrived.

The plan I understand is to start with whetting our appetites for their originals with a cover version they recorded at the same time: originally of course by Rick Astley and a song they were originally asked to play at a wedding on the grounds that the person requesting thought that it would suit Rob's voice. It turned out that it did suit them so much that they not only played it then but enjoyed it so much that it stayed in the set to the extent that it was frequently assumed to be one of their own compositions.

The key I think is to focus on the notion that "it would suit Rob's voice" and not that Rob sounds like Rick Astley as he really does not: this is a really great example of how great covers can be, yet often are not. I personally have never seen a lot of point in an artist attempting to imitate another (and let's face it, so many songs which are popular as covers were originally by artists with sufficiently distinctive a style that a pure impression is pretty much doomed to relative failure), but with a bit of imagination & the right choice of song (credit to whoever suggested it in the first place), good artists can take a song, appreciate its qualities and essence and pay a respectful tribute to the original while playing it in their own way: as Chasing Deer do here. Not only does Rob not feel obliged to do a Rick Astley impersonation, but the band go at the song in a pretty hard rocking way, certainly surpassing the template in terms of dynamics and power: credit too to Rosanne Duckworth who provides trumpet as she will on their next three singles. You can readily understand not only why they like performing it but why they opted to make a professional recording of it as such prestigious a session.

2020 was definitely planned to be a huge year for Chasing Deer: they had been going from strength to strength in terms of gig profile as well as popular and critical response to their material. That didn't happen, but I'm pleased to hear that they have decided the time is right to revert to the original plan. They simply could not have done anything more to maintain a profile in the intervening months and I'm not sure their fanbase will have been eroded over that time: if anything I'd like to think that there are many Chasing Deer fans desperate to see them play again (though of course reconvening as a full live band will require putting into action). They've been sitting on music which Rob described to me as the best they've ever done and starting gently with this cover to ease us in, they could take the music scene by storm in 2021 rather than 2020 by the gems they clearly have been holding back. Judging by the panache and performance commitment on "Pray With Me", there are some very special singles going to be coming our way over the next few months.

In terms of the artwork, you might like to compare it with that of the cover for "Beautiful Life" by Rick Astley. Can you see what they have done there?

As a Christmas treat for us, Chasing Deer have decided to re-release their 2015 festive single, "Together At Christmas".
[1 image] END_OF_DOCUMENT_TOKEN_TO_BE_REPLACED

Unsurprisingly, I've not had the chance to review a new Chasing Deer release since their "Bad Decisions" way back in February.
[1 image] END_OF_DOCUMENT_TOKEN_TO_BE_REPLACED

It's really good to return to "Hot Music Live" regulars Chasing Deer after a while.
[1 image] END_OF_DOCUMENT_TOKEN_TO_BE_REPLACED

I do hope that you'll remember about two years ago Paul Englefield interviewed one of the most exciting local bands from our area Chasing Deer ...
[1 image] END_OF_DOCUMENT_TOKEN_TO_BE_REPLACED

Us lucky, lucky people at Hot Music Live got to check out the new Moving On EP from Chasing Deer.
[1 image] END_OF_DOCUMENT_TOKEN_TO_BE_REPLACED