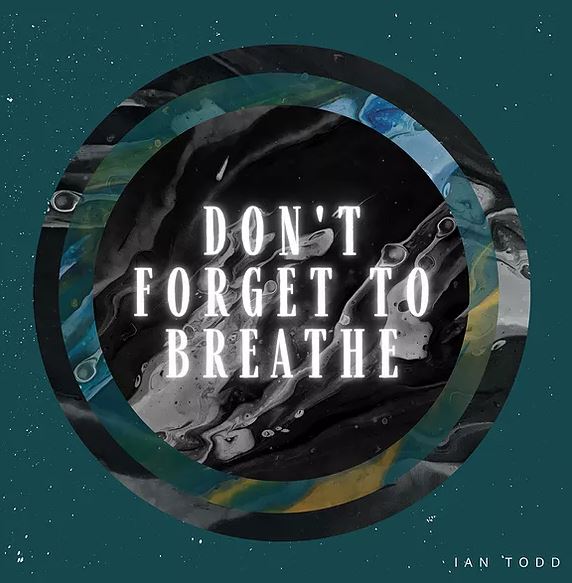 Having reviewed "Hour Glass" (an hour long ambient piece ) by Ian Todd last summer, I am now pleased to say that I can return to his work again, this time to tell you about a shorter release, "Don't Forget To Breathe" which comes out on 4th June (you can presave it via this link: https://ditto.fm/dont-forget-to-breathe)

The single is a first glimpse of his third solo album ‘Seven Signs of a Soul' (out on 6th August) which will also be reviewed in this magazine in due course, but in a conceptual manner is not totally dissimilar to "Hour Glass" as the themes of good mental health and the benefits of mindfulness underpin this exhortation for inhalation: a reminder to take pause, slow down, draw a deep breath of air and take "….a moment to appreciate life, everything and the universe in amongst the day in/day out tasks of living"I rather assumed, especially given its subject matter and the current circumstances, that the song would be a child of the pandemic and so would its parent album. But apparently this is not entirely the case. Ian advises me that although the recordings are of recent date, the ideas have deeper roots, earlier than his previous album (‘Bohemian Hymns') and in some cases even than his debut (‘Groaning Up'). He keeps a lot of ideas (not just for music but also for prose, films etc) in his head and deploys them when he feels a potential audience might be ready for them.

The original plan for the new album to have everyone together in the studio fairly obviously has been postponed until the next one as clearly that was not yet an option, so Ian plays most of the instruments himself apart from marvellous inputs from two fellow "Hot Music Live Presents" artists, Kirk Hastings on saxophones & John Parker (of Nizlopi, Ward ‘n' Parker, The Mechanicals etc etc) on double bass. A word too for Tom Gittins of Monochrome Productions who mastered the album.

In his own words "..I feel the music I'm making now is far more chilled out. This is most likely because I've had more time to be true to myself during the pandemic. I've thrown out the idea of a 3min pop song, I'm letting the music breathe. Generally speaking I want this music to chill everyone out. It's meditative music to contemplate life, the universe and everything. Arguably a stark contrast to ‘Bohemian Hymns' but more in keeping with …."Hour Glass"……I imagine people can enjoy this album with a pair of headphones on, or maybe while unwinding with a hot drink".

The track certainly exceeds the three minute mark I'll grant you that but I think I'd not completely abandon the "pop" tag: there is a sense of the accessible and memorable in "Don't Forget To Breathe" which ensures that people will engage with it & play it more than once. Too many chill out tracks can be self indulgent but this one is tautly constructed whatever the final vibe may feel like. John & Kirk's classy contributions raise it too above the homogenous soup which again characterises some of this genre, but most of all I applaud Ian's own guitar riffing & drumming which so strongly contribute to the quality of the track as a genuine "song" and frankly are more prominent & incisive than again is too often the case in the format. It's a most strange track with constant shifts in sound: one minute it's as angular as say a Talking Heads track & then via a Pink Floyd like bridge we end up in a jazz cellar. "Avant garde" can have a multitude of implications but this isn't pretentious nor inaccessible: what it is is unusual, thought provoking & something definitely external to the box. You may well be following Ian's guidance and using headphones and/or a cup of tea, but you certainly will not be disengaging your critical nor emotional faculties as you listen to this.

While in touch with Ian regarding "Don't Forget To Breathe", I took advantage of the opportunity to pick his brain about the local music scene as it is during these unusual times so I could share his wisdom & insights with you.

I particularly wanted to explore with him the difference between solo work of his like this and the work he does with bands, most notable Shanghai Hostage: so here is his distinction. "The solo works are my baby, a piece of me. They are like diary entries for me but I hope others get enjoyment out of them too. The purpose is quite different to Shanghai Hostage, the depping I've recently started doing with The Upsiders or quite a lot of the clients I mix for. A lot of these projects want to get people up and dancing and having a good time, I want to get people relaxed and immersed. These songs are for people who feel the need to belong somewhere".

In my personal need to conceive what our local music scene will look and feel like as the pandemic relaxes its icy grip on its throat, I find it difficult to make predictions I feel very confident about, so as I have been recently with other people whose perceptions I respect, I posed the question to Ian, whose take on it was thus: "I've heard a few people say it will be like the roaring 20s. I very much hope so. I look forward to taking it all in, the sights, sounds and smells, the fashions and trends, the fascinating things people do on a stage. I look forward to performing this album live too. I've definitely missed paying a visit to a local venue to see someone put on a show, being blown over, until that happens, it won't feel like the pandemic is over".

Finally, as again I often do in order to broaden the sweep of my own radar of local music as well as offering the readers of the magazine fresh insights, I asked Ian who we might keep an eye and ear open for. He cited quite a lot I'm pleased to say of artists whose work is currently exciting him including Shanghai Hostage colleague Sophie Hadlum, (whose piano compositions he likens to those of Ludovico Einaudi),  Taylor-Louise Thomas  (.."a great voice! Great song writer, her new stuff is going in a different direction too), The Upsiders who ".. are taking a funkier direction and lately have been acquiring my 6-string services"), Ward 'n' Parker (whose excellent podcast he praises), Solars from Birmingham, "..if you like post-rock, you'll love them. They've just brought out their new EP ‘ Negative Apex'.." and he also praises their "Reflections"), Batsch, Wolf Suit, The Mourning Suns (also from Birmingham  who  have just released an album called ‘Can't Seem to Move On'), Luke "Mintakaa" Weaver,  Nicholas Peters ("…the Shamanic ambient Magician, I recommend ‘Golden Sunset, Blue Rain'), jazz composer Thomas Haines "..who has also recently started some impressionist piano compositions under the name Tomas Wilhelm.."), Robin Plays Chords and "I've just heard Ace Ambrose's Coming of Age which is the coolest 80s synth pop track".

The second single from the album, namely  "What Goes In is What Goes Out" is released on the second of July and do check out also the video for "Don't Forget To Breathe"  with hand painted stop motion  input from Diana Stefanescu aka Dikira Art (who was also involved in  the "Hour Glass" video). Ian also expresses his appreciation to Emilié Cotterill of Transluceo for the photos & artwork

You can find out more about Ian & the many aspects of his artistry via these links:

Sadly, my live reviews for 2020 & 2021 have been disproportionately outnumbered by my reviews of releases (and let's not forget the last word of ...
[3 images] END_OF_DOCUMENT_TOKEN_TO_BE_REPLACED

As prophesised in our recent reviews of his singles "Don't Forget To Breathe" (in June) and "What Goes In Is What Goes Out" (last month), the ...
[1 image] END_OF_DOCUMENT_TOKEN_TO_BE_REPLACED

The time is rapidly approaching (16th of July to be precise) when "What Goes in is What Goes Out", the sophomore single from his ‘Seven Signs of a ...
[2 images] END_OF_DOCUMENT_TOKEN_TO_BE_REPLACED

Keen readers of this magazine will recollect the February feature  of Ian Todd & even keener ones will have spotted his name amongst the details of ...
[1 image] END_OF_DOCUMENT_TOKEN_TO_BE_REPLACED

We cover so many multi-talented artists in "Hot Music Live": not just musicians but the photographers, visual artists & producers whom they work with.
[1 image] END_OF_DOCUMENT_TOKEN_TO_BE_REPLACED