"Maybe With You" by The Boy Who Invented Everything


"Maybe With You" by The Boy Who Invented Everything 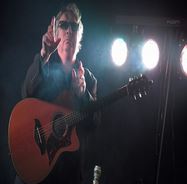 It's with a great deal of pleasure that I write this particular review. Anyone who has experienced grassroots live music in our area over the past years will probably have encountered Sam McNulty. An indefatigable organiser of open mic sessions, he has been running not one but two Godiva Festival stages dedicated to local talent and that's not even factoring in his countless hours spent on various projects, journalism & above all mentoring & encouraging artists. If you read down to the bottom of the credits for each "Hot Music Live Presents" album, you'll see that that project was originally his idea & he has worked with the majority of the 120 artists on the albums  in one form or another over the years.

Yet Sam started out as a musician himself and again his impact has been significant. As co-founder of original local punk band Squad (along with Terry Hall, subsequently of the Specials), he is often cited as one of the key figures in igniting the scene more than forty years ago. Subsequent bands included the critically & popularly acclaimed Giraffes & their successor Two Giraffes (check out "Clifftop Dreaming" on ‘Hot Music Live Presents Volume One'). However in all these years as one of the primest of movers & shakers, there has never been a single track released under his own name. Until today. It's not that he didn't write until recently: quite the reverse: Sam always wrote for the bands he was in from the seminal "Red Alert" by Squad onwards. He has had for years a substantial catalogue of superb solo songs which so many people will have heard live as he always tends to "warm up" open mic audiences himself, to prepare the ground for often less confident artists. He has even recorded bits & pieces over the years. It's noticeable that the basic track for this new release was actually recorded at the long defunct Cabin Studio in Coventry and only finished during lockdown. I suspect that a major issue was his boundless enthusiasm for supporting the talents of others has meant his prioritising that side of his work over his own career.

Thankfully however he has addressed the balance more recently (he even played a full formal solo concert in August 2019 which we reported on for you) and with the considerable support of Paul Sampson (whose own CV would fill a small book but which includes being a member of bands such as the Reluctant Stereotypes & Pink Umbrellas and producing artists such as the Primitives, McAlmont, Catatonia, Hawklords, Band of Holy Joy, Diesel Park West etc) who has produced the tracks since the earliest Cabin sessions & played all instruments bar Sam's own rhythm guitar, a whole album's worth is now on the horizon. Credit too to Keith Fabrique who oversaw a few last minute vocal changes for the single.

Which brings us neatly to "Maybe With You". As mentioned, the song itself will be familiar to those who've heard Sam play live, though arguably not in this precise form. One of his most ardent of love songs, the work with Paul has introduced an urgency which I'd not heard previously: it certainly adds pop credentials to a song which always had a huge emotional heart & indeed can be seen as a direct successor to the Giraffes' classic "Lazy Hazel Heart" (which dates  all the way back to 1990). For a writer who cut his teeth with a punk snarl taking on the establishment, he quickly evolved into one of our area's best writers of the intimate passions within relationships. Set that amidst the pop sensibilities and huge sound picture of the Giraffes and crafted by a maestro who created the immediacy & exuberance of the Primitives & you have a track which is near as dammit perfect & one which is not only exceedingly media friendly but seems to have all the ingredients for the recipe of success. It has in fact already had airplay, including on local BBC and one can only hope it gets the exposure it so deserves.

Sam intends to share the new tracks at regular, if not indeed frequent, intervals & they will eventually build into the full album (provisionally titled 'From the Land of the Broken Hearts'). Certainly his next single he tells me will complement "Maybe With You" and fit into a theme more or less described by the album title. That is not by any means the whole story though as he already got his eye on future releases which take a darker hue.

I keep on crediting Sam with this great song: however I should perhaps in the interests of accuracy point out that when you look for it on Spotify, you'll find it under the persona of "The Boy Who Invented  Everything": another layer of the conceptualism involved in Sam's work (he is a man of many talents including drama too) and which I hope my enthusiasm  for the immediate charms of "Maybe With You" (it has long been one of my favourites of his tracks) hasn't obscured.

Sam & his team are currently working on other media to support the music (watch this space). I'd also recommend your checking out his long interview with Paul Sanders which offers a career overview of great detail and which you can find here: