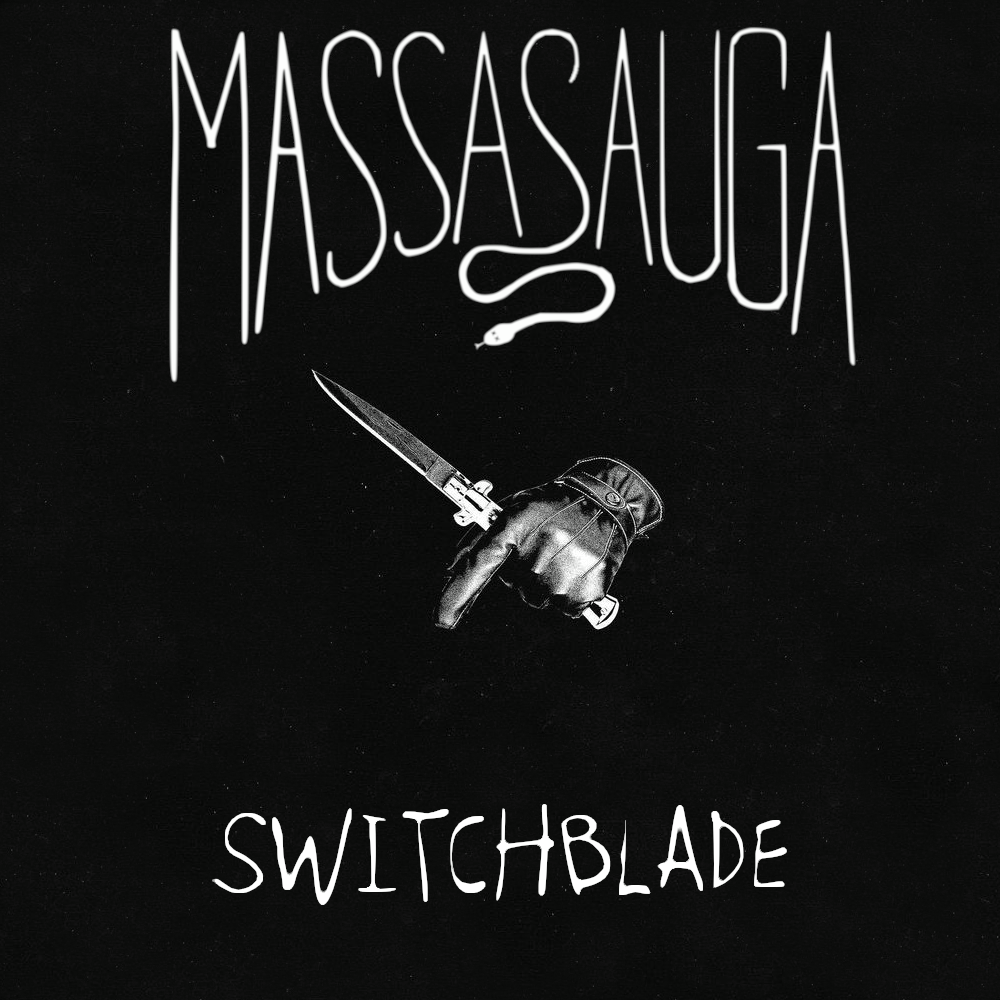 You may remember when back in February Massasauga invited you to participate in their "7 Nights of Terror" wherein they shared teasers of seven songs they had in mind as potential follow ups to "Bullfighter" (which of course also appeared on ‘Hot Music Live Presents Volume Five'):  namely "The House on the Hill", "Cold Spell", "Switchblade", "The Giving Tree", "Asleep in the Ocean", "The Deep Sleep" and "Slip Away". I must admit in my enthusiasm for all seven, I "liked" each one which I suspect means I voted for them all. Nevertheless, despite my enthusiastic if unhelpful voting, apparently "Switchblade" emerged as the comfortable winner and so is released today as their new single. I hope this doesn't mean that at least some of the remaining six won't also be completed & shared at later dates.

It's not at all surprising how this song captured the hearts of so many Massasauga fans.  Taking off from "Bullfighter", the fuzz rock racket ratchets up another couple of notches and the heady mixture of violence, danger & outsider culture switches from the corrida to the world of biker gangs (am I reading too much into things in seeing a parallel between the shapes of the bull's horns last time & the bike handle bars in the new video? Probably, but it's a bit of a spooky one).

You can see the video, compiled from vintage biker movies here: https://www.youtube.com/watch?v=K9AaAJJVZ2I

"A tale of bloody murder and unnecessary violence" as the band tell us, the narrator is a leader of the pack & his story is part braggadocio and part a warning for us to keep our distance from him. You can probably work out for yourselves where the title comes from by now.

Roaring along faster than a bunch of Hells Angels on their hogs, what I like about "Switchblade" is how much of it you can appreciate in detail. Now I love distortion as much as anyone else, and you may find it odd that I'd describe such an approach in such a way, but whereas I find it difficult to describe or appreciate distortions when all the component sounds bleed into each other losing distinction,  Massasauga manage to make sure we can discern all their playing elements. Possibly being a duo helps by keeping the elements down to drums (courtesy of Jillian Dawes), guitar & vocals (by Conrad Lummus, though I'm not sure precisely how many guitars are involved). However just as important must be their own innate taste & skill in arrangement and production because like the best exponents of noise, the Velvet Underground, Hendrix, Jesus & Mary Chain, White Stripes the Who etc, they use the distortion as an additional instrument & not as a soup for everything to marinade in.  "Riffs so sharp they'll cut you down..." is their tagline & they are on the money there too.

Massasauga have only been releasing tracks for about a year to date, but not only have they all been ones to make you sit up & take notice, the arc of their development is one which points to many triumphs to come. Can't wait for them to unleash this material live either.

Out at 1800 today was the long awaited EP by Massasauga, ‘Exorcisms and Psychic Visions'  which is also a compendium of most of their recent ...
[1 image] END_OF_DOCUMENT_TOKEN_TO_BE_REPLACED

Out today at 8 pm is the new Massasauga single, with the sort of title you have come to expect from this band with a penchant for the darker side of ...
[1 image] END_OF_DOCUMENT_TOKEN_TO_BE_REPLACED

One of my favourite movies by Steven Spielberg, has always been "Duel": unfortunately as it was his 1971 feature length debut, it has been grievously ...
[1 image] END_OF_DOCUMENT_TOKEN_TO_BE_REPLACED

Way back in the day, Hallowe'en was a rather different sort of festival, a sort of development of the pagan Samhain harvest festival but ...
[1 image] END_OF_DOCUMENT_TOKEN_TO_BE_REPLACED

It was back in April when out of their "7 Nights of Terror" competition, Massasauga fans voted the chilling "Switchblade" to be their single.
[1 image] END_OF_DOCUMENT_TOKEN_TO_BE_REPLACED