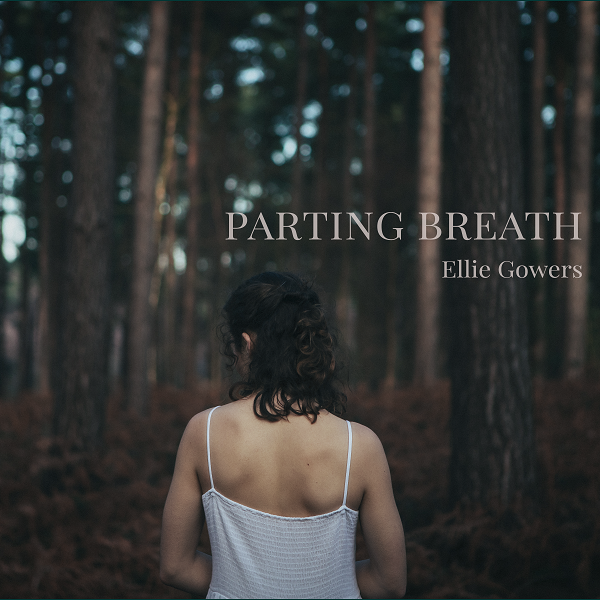 One of the many frustrations of the past year has been the loss of momentum in the careers of various local artists who were so obviously on a roll: gigs stopped for them & the chance to record new material became very much more difficult. High on such a list would  be Ellie Gowers  whom I last saw play live on 29th February 2020: a typically sparkling & intense performance reported on in this magazine from an artist who was being very hotly tipped & cited by so many in the media & fellow musicians.

Some of my frustration was based upon the wonderful new songs she had had in her set over the previous months which everyone who heard them was looking forward to accessing on record later in 2020. That could not be, but very thankfully eventually Ellie has managed to get some recording done & so will be launching her new and greatly anticipated EP ‘Parting Breath' on 5th March: her first EP since 2018's ‘From Here on Out ‘ though please also check out her collaboration on "Arthur McBride" with Filkin's Drift in October 2020 as reported in the magazine.

As with so many other artists currently, the choice of format with four songs featured, acts to concentrate our attention on the sheer quality of each one when a conventional album collection might distract us more. With songs this powerful who needs quantity to prevail & in all honesty so profound & intense are Ellie's offerings that few of us probably possess the emotional capacity to process more than a quartet in one sitting.

For make no mistake, ‘Parting Breath' is an experience of profundity & intensity.  Were it not for the fact that the songs were at least conceived if not fully composed  pre-COVID19, one might ascribe these qualities to a sense of frustration on Ellie's part: though I would certainly credit that to her performance to some degree: it smoulders throughout.

The subject matter as well as the arrangements naturally give rise to the nature of the songs & generally one gets the impression that Ellie is looking hard at the world & finding aspects of it to be of concern.

‘Hot Music Live Presents' followers will know "Against The Tide" from  2019's Volume Two on which it appears and it was one of the tracks which drew the most comments & approbation received at HMLP HQ. It was also released as a single in the same year & we reviewed it saying "…"quite extraordinary" were the first two words I wrote down on the initial play. The song grabs you by the emotional throat instantly & you can tell that Ellie is holding nothing back on that front: a few moments at any of her concerts will have told you thought already though….to cut to the chase, "Against The Tide" is going to move you. Furthermore it exceeds even my expectations.". Reissued on this EP as Ellie felt it did not quite get the attention is deserved when first released, it was recorded at J&J studios in Bristol with TJ Allen, and features Joe Dean and Rob King on guitars, Conor Ross Harrington on drums, and Joe Johnson on bass. Speaking "of societal conventions and conditioning (and) looking at matters that are sometimes out of our control, it examines the push and the pull of trying to break these patterns" the song certainly confronts the issues concerned square on & I stand by the "quite extraordinary" tag eighteen or so months on. It also now has a video to accompany it (accessible at https://www.youtube.com/watch?v=ktE47xXwqpI) & filmed on Cannock Chase, which matches the music perfectly.

The other three tracks were recorded more recently in Stroud with Lukas Drinkwater and feature Alex Garden on strings, Lukas Drinkwater on bass, Seth Bye on accordion and Ellie's Mum Rosie Gowers on piano. Anyone who has witnessed an Ellie live performance (and if not I urge you to at the earliest opportunity) will testify to the unique presence she has on stage & the tremendous emotional clout she delivers entirely by herself, so you might wonder what all these additional players bring to the feast or worry that they might distract from Ellie's central performance. Well you need not fear: like fellow BIMM graduate Izzie Derry, Ellie is evolving her recorded sound & enhancing her tracks with additional nuances which help with emphasis & textures & which in no way affect the core qualities of the songs.

These  have like the sound themselves evolved over the past few years. One song I expect to seize everyone's imagination is "The Sky Is On Fire" which regular Ellie watchers will have heard develop its lyrics as she worked hard to encapsulate a world she saw as going to rack & ruin before her eyes: ecological mayhem & terrorism all adding to what frankly is an apocalyptic track & is a stunning achievement, finally managing to channel her considerable anger into a cogent & needle sharp lament & warning. Earlier this month in my review of Luke Concannon's new album 'Ecstatic Bird In The Burning' I suggested, particularly in relation to his song "Coventry" which equated the Coventry Blitz to current disasters via the burning sky image, that it was interesting how both he & Ellie had lit upon the same comparison right now…. However like Luke, hope springs eternal in Ellie's heart and amidst the anger "The Sky Is On Fire" also offers us "…the notion that there is an urgent need for us to work together as a society to ensure the world is a better place for generations to come."

If these two songs share a common theme of frustration, then Ellie channels her passions in the other two along rather different channels: turning down the angsty setting to gentler levels.

The title song nods to both the traditional "Parting Glass" and to Robert Burns' "Auld Lang Syne" and while on an immediate level a celebration of family & friends getting together at New Year, its themes of beginnings, temporary farewells and sense of communal joys certainly speaks to our current situation & offers hope for reunions which at the time of writing have not yet come to pass. As you might guess, the sound is possibly the most traditional "folk" of the four & emphasises the delicacy & fragility which is as much part of her vocal range as is her power on the above two songs.

The last track to tell you about,  "Eva", is the most overtly personal in the collection (though given the strength of feelings expressed in the others, one can hardly doubt their closeness to Ellie's heart: they are just expressed in more broad terms) and dates back to the sense of independence she experienced on leaving home to study in Bristol, yet even so, like its companions, harks to senses of separations being ended & bonds renewed. The atmosphere here is the most dreamy & contemplative on the EP and so contributes to offering us a range of emotional responses within the whole.

There is an extraordinary potency in Ellie's writing & performance (how fortunate is she to be equipped to give her passionate songs the delivery they merit) and this is yet another stunning addition to her canon of work. There is a clear progression in her writing as well as the development of fuller arrangements. She is certainly tipped as one of our local musicians most likely build a following across the country & beyond & this work definitely shows that this is becoming more & more credible: these songs have the clear potential to send metaphorical ripples across a large body of water.

To quote her lyrics "I wouldn't fight it, if I were you".

Strange and wonderful times: I find myself today writing my second live report inside a week.
[3 images] END_OF_DOCUMENT_TOKEN_TO_BE_REPLACED

For those of you who have been deprived of hearing the music of Ellie Gowers (I was fortunate enough to catch a live set on February 29th, but that ...
[1 image] END_OF_DOCUMENT_TOKEN_TO_BE_REPLACED

Some of the records I review for "Hot Music Live" come to me out of the relative blue.
[1 image] END_OF_DOCUMENT_TOKEN_TO_BE_REPLACED

Last evening was one of local music's most anticipated gigs of 2019 so far.
[1 image] END_OF_DOCUMENT_TOKEN_TO_BE_REPLACED

One thing which I guess always gets the pulse of a reviewer speeding up is the chance to write about someone whose musical career is just taking off: ...
[2 images] END_OF_DOCUMENT_TOKEN_TO_BE_REPLACED