'Ecstatic Bird In The Burning' by Luke Concannon 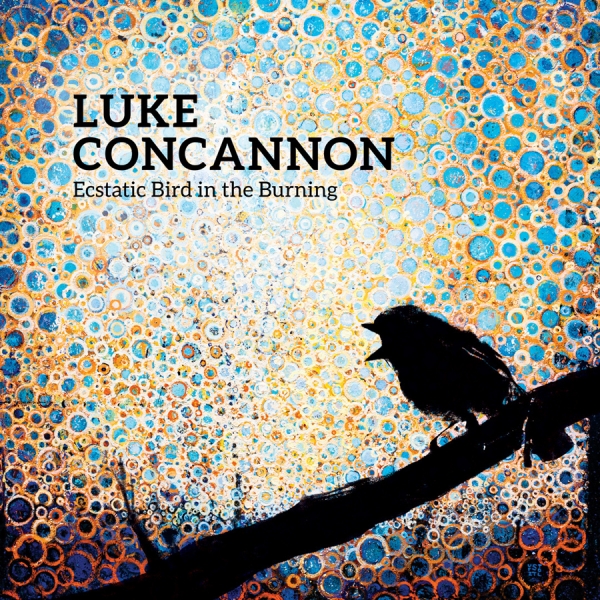 One of the most anticipated albums to be issued by a Coventry & Warwickshire artist has to be 'Ecstatic Bird In The Burning' which Luke Concannon is sharing with the world on February 5th.  The tunes have long been assembled & I've long wished to share my thoughts with you. Now the moment is here.

Thankfully, Luke has already released three of the songs as singles "Doing Nothing" which we reviewed in October, "Your Heart is in My Chest" the following month & most recently "Absolument" which has been out a couple of weeks. Three entirely different tracks & each quite stunning in its own fashion and hopefully you will recollect my thoughts on these, or if not refer back to the reviews.

You'll be pleased to hear that the seven tracks on the album which you won't have yet heard fit right in with the themes of individuality & excellence.  Produced by Nashville's James Prendergast at the Vermont farm of singer-songwriter Anaïs Mitchell (Luke now lives with his wife Stephanie Hollenberg, on Abenaki land in that state), the ten songs feature a most impressive array of musicians (including Stephanie whose voice in the harmonies is prominent).

I'd say that despite the wonderful eclecticism of the collection as a whole, there are several unifying factors. The first, and possibly most apparent, is Luke's abiding enthusiasm which elides into optimism despite whatever issues concern him. This has been so evident in the boundless joy of  "Your Heart is in My Chest" and "Absolument" where the chief problem seems to have been containing it & even "Doing Nothing" had a self deprecating wit which neutralised any possible negativity in his circumstances. The same, as you'll discover shortly, applies to the "new" pieces.

The other common thread, which I keep on returning to in my reviews of Luke's work, is how he has now completely transcended genres in his work: yes the songs as a set are eclectic as many excellent artists' are, but they are internally eclectic too: each individual one contains melded aspects of a variety of styles which he has achieved the art of getting to work together holistically: I think one can definitely hear the acquisitions of all his explorations of musics of the world.

So what are the other songs? A key one, the mighty "Join The Liberation" (which he originally released in 2017) is what you might call trademark Luke: a passionate exhortation for us to unite in meaningful action: plaintive in its description of the current horrors yet getting angry in response to them: at this point his vocals nearly burst out of the melody so great is his emotion.

"Coventry" is a nice touch, reconnecting him with the area covered by this magazine, but of course Luke is no parochialist & it is no token tip of the hat his homeland, but poetic use of the dreadful events of the November 14th 1940 "Moonlight Sonata" blitz to evoke parallels with the cynical & materialistic society he sees around him: strong imagery for sure but he seems unwilling to mince his words on this subject. To add to the sense of moral outrage, the arrangement is very unsettling: odd fragments of disparate cultural tones drift in and out: vaguely "Eastern" strings, sudden horn stabs, wailing harmonies. Like "Join The Liberation", "Coventry" uses the symbolism of civilisation on fire to make its point about impending apocalypse (and he's not the only songwriter from our area doing this currently: I think of Ellie Gowers' as yet unreleased "The Sky Is On Fire").

"The Hummingbird (Kieron's)" (I imagine the title is a nod to his Dad) is probably the most single minded of the album, being the nearest to a pure folk song & featuring absolutely gorgeous guitar playing of a stately reel picturing a pastoral idyll.

"Feel You In My Arms" has as its focus the plight of those without homes & those isolated from their families, the victims of alienation & rejection by society while pleading for compassion towards them & genuine connection.

"It Won't Wait" is a lament set appropriately over an arrangement built around a drone heart, though in characteristic Luke form, after a while his exuberance causes him to break away from this restraint & not only does the track increasingly swing, but we even get a rap section.

"Denial" is another stunner as you might say: sung a cappella, the absence of instrumentation leaves Luke nowhere to hide: but then why would he want to do that? He has the voice to pull it off (though the delivery is totally sincere: there is no showboating here) and above all with Luke it's about the message of the words: and you certainly can't escape them here.

Finally we have "Grow Wild", which certainly seems to be a highly personal one: possibly directed at Stephanie & it consists of a series of themes & metaphors which  twist around each other so organically it is sometimes difficult to disentangle them: which almost certainly is what you are not meant to do. We get layers relating to gardening, creating music, personal relationships & nurturing whole communities: both literal in every case (I think) and mutual metaphors: all delivered over one of the most "genre defying" arrangements on the record: another seamless concoction crafted from many elements with which Luke feels comfortable as a writer.

As I say, there is so much going on on 'Ecstatic Bird In The Burning', yet despite the delights in all the many details, the core messages of hope, love, the need to engage etc remain crystal clear. He asks much of us, whether it's to respond to the challenges in his lyrics or get around his often very idiosyncratic song structures and arrangements, but that is not in my book a bad thing.  Luke's discography is extremely impressive, yet this is arguably his best work to date: many things are coming together & maturing & this is the album of a man confident in his own creative skin: clear on what he wants to sing about & clear on how to say it. An artist with a bulging portfolio of musical ideas to pull out in service of his songs & the skills to combine them into coherence.

For his first single since the great success of his ‘Ecstatic Bird in the Burning' album, Luke Concannon has created "What Would You Change" ...
[1 image] END_OF_DOCUMENT_TOKEN_TO_BE_REPLACED

As I'd been in contact with Nizlopi singer/guitarist Luke Concannon regarding the release of his brand new solo album 'Ecstatic Bird In The ...
[1 image] END_OF_DOCUMENT_TOKEN_TO_BE_REPLACED

In advance of the full release of his new album 'Ecstatic Bird in the Burning' in February, Luke Concannon is this week sharing a third ...
[1 image] END_OF_DOCUMENT_TOKEN_TO_BE_REPLACED

If next February seems still an awfully long way off to wait for the release of 'Ecstatic Bird in the Burning', the next album from Luke ...
[1 image] END_OF_DOCUMENT_TOKEN_TO_BE_REPLACED

Today, I'd like to draw your attention to a new single to be released on October 2nd from across the Atlantic: quite an unusual review for an ...
[1 image] END_OF_DOCUMENT_TOKEN_TO_BE_REPLACED