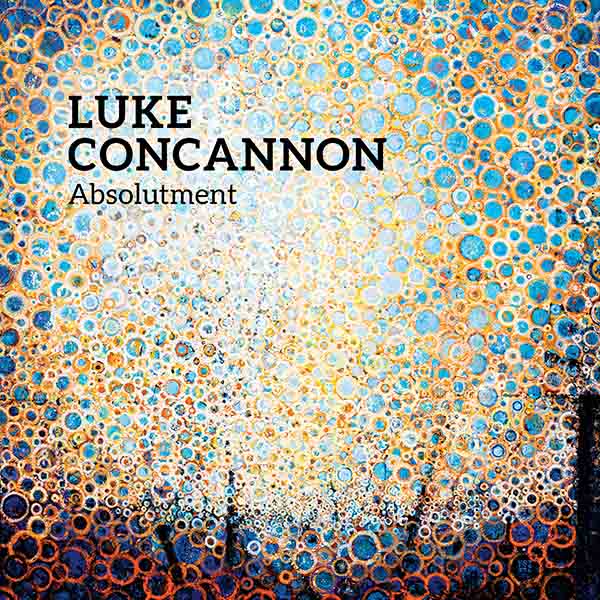 In advance of the full release of his new album 'Ecstatic Bird in the Burning' in February, Luke Concannon is this week sharing a third single from it, namely "Absolutment" (look out for the online launch party on the 8th January, featuring as Luke's guests, two time Grammy nominated Creole, rock & soul musician Sean Ardoin as well as singer/songwriter Jordan Brooks).

"Absolutment" has the daunting job of following the two remarkable singles already released from the album: October's "Doing Nothing" and "Your Heart Is In My Chest" which came out & was reviewed in November.

Luke being Luke, this naturally is a feat he pulls off with aplomb. Part of this I expect comes from his ever increasing experience & confidence  at composing & performing in various styles, but at heart I suspect that it derives fundamentally from his complete openness to all forms & approaches and a complete lack of interest to either being tied to a single style nor even writing an individual song within one. This is an artist with an insatiable curiosity for exploring music & consequently you can infer a complete love for the diversity of the artform.

Regular Luke fans may probably be surprised by the immediate blasts of brass, while very long term ones probably won't be quite as surprised at (though I must say the immediate effect is delightfully startling) as they have come to expect the unexpected.

As usual, any genre descriptor is pretty elusive. The presence of a jazz flavour won't come as too much of a shock, but this song is much closer to a big band swing form than his usual arrangements and likewise while soul is always present in his work, this is a bold & triumphant version. Add in the French element of the title (and refrain), harmonies which elide subtly between jazz, soul & African styles (the latter a connection with the start of "Your Heart Is In My Chest") and you have a rich mixture.

Again the joyousness of "Absolutment" is trademark Luke, though rarely quite as much as this: has he been to New Orleans before writing this I wonder?  The lyrics offer a characteristic range of layers of depth & philosophy from the immediate call to get up and dance to the exhortation to make real change in our lives.

Given that he has already shared three completely different songs from the same forthcoming collection and having heard the others already, it's clear we can anticipate an extremely eclectic album. Records with wildly differing styles can often by chaotic, incoherent & jarring, but Luke is one (perhaps like Elvis Costello or Paul McCartney) who can pull this off…. On the evidence to date, this is shaping up to be his best yet.

For his first single since the great success of his ‘Ecstatic Bird in the Burning' album, Luke Concannon has created "What Would You Change" ...
[1 image] END_OF_DOCUMENT_TOKEN_TO_BE_REPLACED

As I'd been in contact with Nizlopi singer/guitarist Luke Concannon regarding the release of his brand new solo album 'Ecstatic Bird In The ...
[1 image] END_OF_DOCUMENT_TOKEN_TO_BE_REPLACED

One of the most anticipated albums to be issued by a Coventry & Warwickshire artist has to be 'Ecstatic Bird In The Burning' which Luke ...
[1 image] END_OF_DOCUMENT_TOKEN_TO_BE_REPLACED

If next February seems still an awfully long way off to wait for the release of 'Ecstatic Bird in the Burning', the next album from Luke ...
[1 image] END_OF_DOCUMENT_TOKEN_TO_BE_REPLACED

Today, I'd like to draw your attention to a new single to be released on October 2nd from across the Atlantic: quite an unusual review for an ...
[1 image] END_OF_DOCUMENT_TOKEN_TO_BE_REPLACED