"Make You Stay" by Kenzie Webley 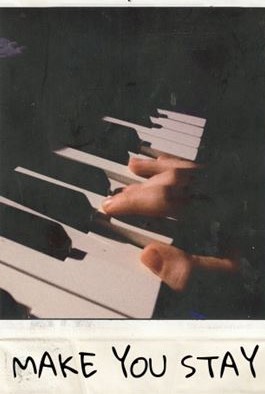 When I interviewed Kenzie Webley the other week for the feature in the magazine, she was busy at 14 Records laying down some brand new tracks for us. Little did I realise that so soon afterwards I should be reviewing one of them, namely her new single "Make You Stay" (which is released on Boxing Day). This really is fresh music & hats off to Kenzie & Matt and Gemma for getting it ready for us so swiftly.

The song was of course produced by Matt Waddell & Kenzie wrote the track, provides all vocals & piano. The other instruments are courtesy of Matt and Gemma helped with the harmonic arrangement.

Ironically, despite its extreme freshness, the song itself has its roots three years ago (when Kenzie was fourteen) and written originally at that time in response to a real incident in her life. That said, I think it was wise to let the song (presumably) evolve over the intervening years. Not only does this allow Kenzie to bring extra experience to what is a complex & profound subject, but it also enables her to apply a perspective to it: and I'm sure the song is all the better for this sensible approach.

The subject is the sensitive one of mental health and "was actually written three Christmases ago after I received a call from a friend in the middle of the night." At this point I think Kenzie's words are far more effective at expressing her feelings than any attempt of mine to précis them could be (and exactly the same applies to the feature from the other week: so articulate & thoughtful were her responses to my questions that I barely edited them for publication). "It's about trying to be supportive to somebody with mental health issues but feeling like you don't have all of the answers. As the song says I was only 14 for god's sake! In the circumstances we find ourselves today there are more and more people suffering with depression and suicidal thoughts and countless more who are affected by being close to someone who is in that predicament. I hope this song resonates with people and if anybody finds themself in the position I was in I hope, like I did, they reach out to somebody who is better qualified to provide the support that their friend or loved one's needs."

At this point, at the risk of boring regular readers, I'd like to return to a theme I have raised before: we are currently blessed with so many wonderful & original writers (and performers) in Coventry & Warwickshire: one aspect of this is that they seem unafraid of writing in their own voices, without feeling the need to emulate others, but another is that they simply do not shy away from writing about "difficult" issues such as these: often exposing their own deepest thoughts & vulnerabilities to us. There are so many of these at the moment (one imagines there is an element of mutual inspiration amongst them all, even though they are not copying each other). The list is too long to fully share (however the specific feature with Naomi Beth on mental health issues at the start of the pandemic is perhaps one worth citing), but clearly Kenzie is very much at the forefront of this newish movement of writing songs with complete honesty yet which are also fine songs in every other conventional aspect: including being attractive to the listener.

Because "Make You Stay", have no doubts, is a very fine song. Like many (if not all) those I've mentioned, Kenzie & Matt have decided to reflect the truthfulness in the song by admirable restraint in the arrangement and production: too much of either & we'd be less inclined to focus on the words & message. Essentially built over her own gentle piano playing, it's Kenzie's voice we notice the most & she has a voice which has the confidence & qualities to thrive without the need for a big production. Warm & sympathetic, it shows as much empathy as it does concern: let's face it, this is a song wherein an adolescent attempts to pull a friend back from the brink of self harm without the life experience to easily do this nor even being there to comfort in person. What a task. In the end, the love & wisdom imparted is a pretty decent shot at it & although the lyrics make it abundantly clear that this relates to a specific incident, I think, like all well written songs, it can apply to other people & other situations.

This story is central & one naturally focuses in upon it. Nevertheless, despite the (apparent) simplicity of the arrangement, there are many neat & subtle elements in there which keep variation going in the accompaniment to the narrative: tasteful string sounds in particular & shifts in dynamics so that the emotional tone rises & falls during its course.

It is easy to compliment Kenzie's technical talents in terms of her writing , vocal & instrumental performances, but I think what elevates an artist like this in my mind are the "bigger picture" elements such as how she has tackled the subject matter so well and above all to have the confidence to release such a song on Boxing Day. In a world where a poor reviewer  has to deal with songs about sleigh bells etc at this time of year, to be able to review a song which reminds us that depression is something more people experience over Christmas than they do reindeer is if not a delight, certainly is something which makes me much more hopeful for the future. And if the rest of her album is this good, I can't wait for 2021.

Fans of Kenzie Webley will, I am sure, have been aware for many months that she has been working on her debut album at 14 Records in Leamington: I ...
[1 image] END_OF_DOCUMENT_TOKEN_TO_BE_REPLACED

For those of you who were wondering about the activities of that rapidly rising local star Kenzie Webley, I am able to bring you up to speed.
[1 image] END_OF_DOCUMENT_TOKEN_TO_BE_REPLACED

I'm delighted to report to you the release of a new single by Kenzie Webley on 21st May, namely "Loveable" .
[1 image] END_OF_DOCUMENT_TOKEN_TO_BE_REPLACED

In my interview with Roddy "Radiation" Byers of The Specials etc earlier in the week, I observed how the pandemic has cut a swathe through the music ...
[1 image] END_OF_DOCUMENT_TOKEN_TO_BE_REPLACED