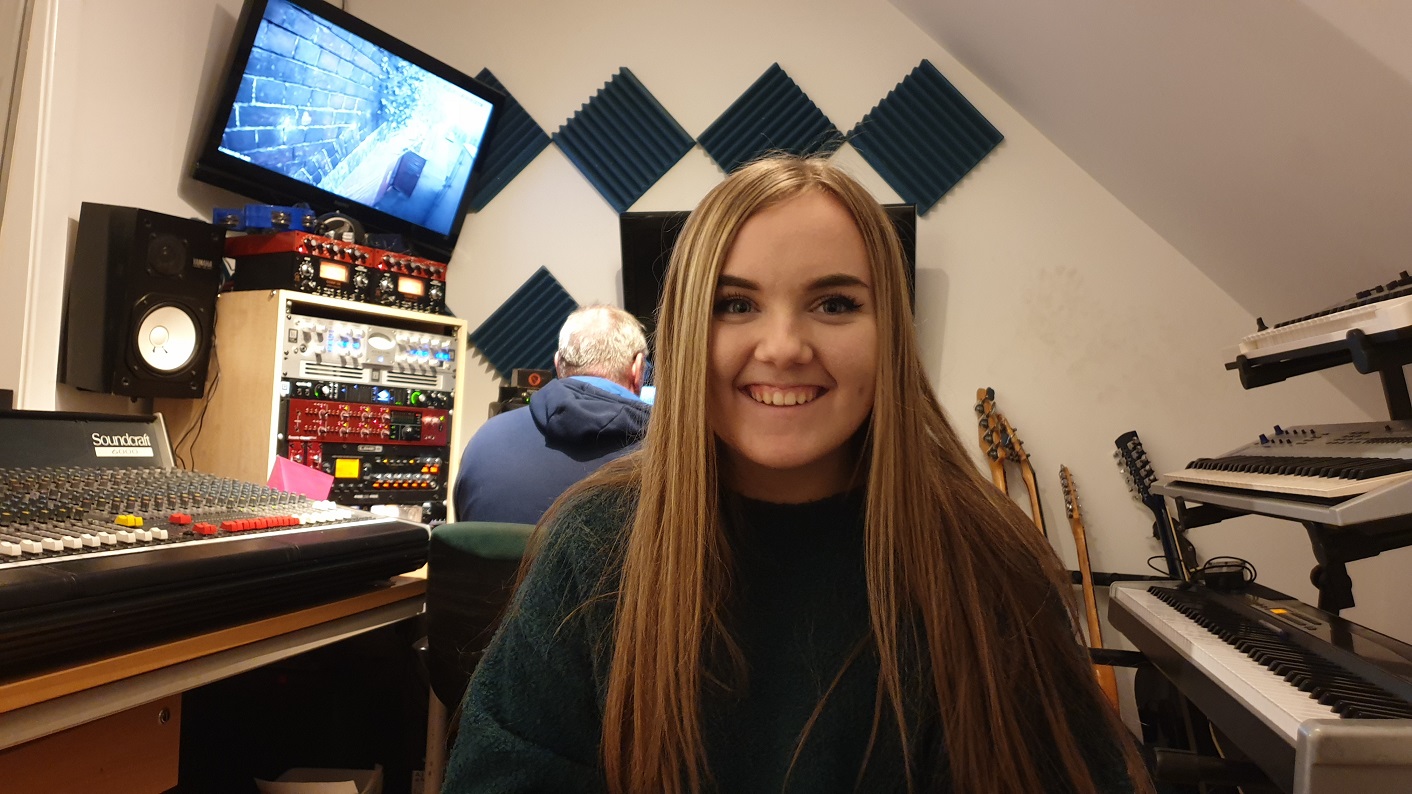 In my interview with Roddy "Radiation" Byers of The Specials etc earlier in the week, I observed how the pandemic has cut a swathe through the music scene, both locally & globally affecting both internationally known artists like Roddy & those whose fame is at this point more local. After talking with someone from the former category, it was great to catch up with one of our fastest emerging musicians from Warwickshire (and one of the most popular already judging by her sustained presence at the top of the HillzFM chart with "Head v Heart" and previously her bedroom demo "Nicotine Kisses") , Kenzie Webley yesterday during her latest recording  session at 14 Records (and of course I featured Matt & Gemma from that company in July, looking at how they were adapting to current circumstances). Naturally our chat was carried out with appropriate social distancing.

Firstly, could you let our readers know a little bit about yourself please?

"I'm 17, I am studying Chemistry, Psychology and Drama at A Level. I've just submitted my application to university but, in the circumstances, am considering taking a year out to focus on my music."

Secondly how did you get started in your musical career?

"When I was growing up we always had music playing in the house, in fact I'm pretty sure we had music playing on YouTube more than the TV. I was learning keyboard from the age of 5 and I had taught myself guitar by the age of 11. By 13 I had written my first song, and pretty soon after that I started busking, which eventually led to other small paid gigs. I've always loved performing so I've been going to Stagecoach since I was 9 and that really showed me how much I love to be onstage singing and even got me into a role in 'Babes in the Wood' at the Priory Theatre in Kenilworth last Christmas, which is how I met the lovely Paul Sanders who was a DJ with Hillz FM at the time. He heard my original music and encouraged me to submit one of my songs to the local chart, which at this point was just a bedroom demo of a song called "Nicotine Kisses". After that Paul put me in touch with 14 Records and I went into the studio to record my first official single "Crooked Hearts" which was named Tune of the Week on BBC Introducing CWR, and since then it's all just continued to grow."

What influences on your music can you identify please?

"I have been told on more than one occasion that my music is reminiscent of Imogen Heap, which is clearly a subconscious influence given that my family love her, and I take that as a massive compliment. In songwriting I think my earliest influences were Jason Mraz and an Australian singer-songwriter called Missy Higgins because they got played a lot in our house and are both such talented writers so they really grew my love for lyricism. Also my Dad got me into Ed Sheeran really early on in his career, when he was touring his ‘Loose Change' album before he signed with a major label and went through the roof. More recently I have loved the music of Cavetown and Dodie, and whether these influences can be directly heard in my more recent songs or not, I'm not quite sure, but I know that they inspired me heavily to keep writing music, and the tone in which I write my lyrics. Somewhere in between I also went through an Oasis obsession, and I think that style of music comes through in some of my earlier songs."

What can you tell us at this point about any planned record releases?

"I have been trying to get my first album recorded, although this has been hindered a lot by the situation the world finds itself in currently. I have been back in the recording studio recently recording new tracks to come out soon, the next song coming out is hopefully going to be a song called "Make You Stay" which I am really excited for people to hear. While it is tonally quite different from the music I have released so far, it is a piece that I really poured my heart and soul into when writing, and I really believe it has an important message about mental health issues which I hope I can communicate to my listeners, and I feel even while this is a song I wrote 3 years ago, the themes are particularly relevant in today's climate."

Dare I ask if you have any gigs planned?

"I'm hoping I will have some online charity gigs to be involved in as and when they arise, such as the Education Saves Lives fundraiser that I participated in recently. I will be performing some live Christmas music as a part of my local village's festivities. I'm not quite sure what that entails yet and how it will work but it is definitely something to look forward to. As I am sure all musicians are at this time, I am looking forward to gigging again once the world is back to ‘normal'."

What would you like your audiences to take away with them when they hear your songs?

"This is a hard question. I hope they take away whatever they need to from the song. Songwriting for me is an outlet for my emotions, thoughts and worries and when listening to my album, each song is like a snapshot of my life at a particular point in time. But, just because a song has such a specific meaning to me, that doesn't mean everyone is going to listen to it and hear the same thing, so I hope that, when someone listens to my songs, they can take away whatever meaning resonates most with them. A song's meaning to me is whatever you place onto it, whatever it says that speaks to you; I think that's the beauty of music."

Are you optimistic or pessimistic about how local music emerges from the pandemic?

"I'm definitely optimistic. Don't get me wrong, I feel nervous about what it means for everyone and it is such a difficult time, especially for musicians who need this to put bread on the table, but I think in the peak of the pandemic our local music community really came together- performing online festivals and creating playlists with our music. I think we are lucky that this love for music unites us in a time where everyone and everything is so divided. And, of course, we can't forget that this whole situation is great songwriting inspiration, and I think us musicians can make the most of that, and I think everyone is ready to support each other once gigs can go ahead again."

Which other local musicians would you recommend to the readers of "Hot Music Live?

"I think Hannah Woof has to get a mention. She made it into my Spotify 2020 top artists, which was of no great surprise to me considering how much I love her music. Abz Winter is also insanely talented and I think she's going to have an amazing music career ahead of her."

If you had the chance to collaborate with any (living) musician, whom would you name?

"There's too many! Right now, I would probably say Dodie, because I think she has such beautiful meaning in her songs and our styles complement each other nicely. I also always sing harmonies along while listening to her songs, so I guess you could say I'm halfway here haha."

Fans of Kenzie Webley will, I am sure, have been aware for many months that she has been working on her debut album at 14 Records in Leamington: I ...
[1 image] END_OF_DOCUMENT_TOKEN_TO_BE_REPLACED

For those of you who were wondering about the activities of that rapidly rising local star Kenzie Webley, I am able to bring you up to speed.
[1 image] END_OF_DOCUMENT_TOKEN_TO_BE_REPLACED

I'm delighted to report to you the release of a new single by Kenzie Webley on 21st May, namely "Loveable" .
[1 image] END_OF_DOCUMENT_TOKEN_TO_BE_REPLACED

When I interviewed Kenzie Webley the other week for the feature in the magazine, she was busy at 14 Records laying down some brand new tracks for us.
[1 image] END_OF_DOCUMENT_TOKEN_TO_BE_REPLACED