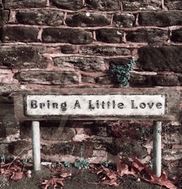 A moment of pleasure, the more appreciated because it was unexpected, hit me last evening with the news that Stone Bear have released a new album, entitled ‘Bring a Little Love'.

It was around eighteen months ago that I first reported to you that the band were adopting a new approach to writing for a while, after the very raw & full on sound on their self titled debut album, with a greater emphasis on finger picking from David and Jeff using brushes more, resulting in a softer, more intimate set of material.

Since then, they have shared a series of singles with us to reflect this, some of which ("Ole Cherry Tree", "Long Gone", "Train" etc) are compiled on this new record & of course the title track itself first appeared on ‘Hot Music Live Presents Volume One': I suggest rather than repeating the reviews of those tracks, you might refer back to refresh your memory as to what I felt about them.

Even the songs you have already heard however have been remixed for ‘Bring a Little Love' & Stone Bear are fortunate enough to have their own studio for this purpose & for the original recordings.

Those tracks which have not previously been released in other formats  are called "Shakin' Your Head", "Till The Morning Sun" , "Stone Bear Blues" , "Till The Sun Looks Down" , "Devil On The Hill" and "Crawl Across The Water". Generally (and I'd like to say firstly that they don't sound at all like each other), these songs tend towards the gentler end of the blues, with often sparse & open arrangements allowing us to savour each lick & beat to the fullest, so you can see both how they fit into the Stone Bear template for 2019/20 and equally why their home was always more likely to be on an album rather than as a single

Nevertheless, despite this set of characteristics, each is extremely memorable in its own right, and one aspect of Stone Bear's talent (one perhaps I haven't fully explored before this particular review) is in writing concise & tightly honed "proper songs". Yes they certainly do have a compelling live act & are rightly praised for their musicianship, but there is real taste in there too: in concert there is no showboating, no self indulgent soloing: just straight to the target blues playing & I am sure that is one of the major elements in their appeal.

It is also greatly to their credit that they have carried out this two year project of exploring a different side to the blues from the more raw Howlin' Wolf or Leadbelly  end of the spectrum: it shows us (and presumably themselves too), that the volume can be turned down without loss of power & emotional impact and their creation of such beautiful & melancholically contemplative songs as  "Till The Sun Looks Down" or "Devil On The Hill" fit in perfectly with previous tracks like the exquisite "Broken Stones" from their debut (a personal favourite) and enrich their overall canon of work.

That's not to say however that "quieter" means a succession of mournful blues ballads: "Till The Morning Sun" struts along in compelling fashion (the closest we get to the John Lee Hooker vibe on here), as does the funky "Shakin' Your Head"   (the one song which not having been a single might plausibly have been so in my opinion), "Stone Bear Blues" forsakes the finger picking for a clarion Chicago style piece & album closer "Crawl Across The Water" offers a passionate & uplifting message to us.

Not only have the band shared these songs with us now, but they are already working on a third album which is something greatly to be anticipated as of course is their eventual return to live performance, which after all is what they have built their considerable reputation upon. In the meantime, a remixed version of "Long Gone" (which first appeared with "Train" back in January of this year) is the new single from this album & has already had BBC airplay. Hopefully you now have sufficient great new Stone Bear material for your pleasure to keep you going until 2021 brings a resumption (we trust) of their full activity levels.

It seems almost unreal and a bit transgressive to find myself writing a live review after so many months of reviewing the recorded activities of ...
[3 images] END_OF_DOCUMENT_TOKEN_TO_BE_REPLACED

It is always really great to have new talent introduced to you & it is a clear & highly  admirable feature of much of the music scene locally that ...
[4 images] END_OF_DOCUMENT_TOKEN_TO_BE_REPLACED

We are lucky to have more than our fair share of excellent blues practitioners locally: not only do they all possess an obvious love of the form as ...
[1 image] END_OF_DOCUMENT_TOKEN_TO_BE_REPLACED

Readers may well (I hope) remember   from an earlier review, my enthusiasm for the live act of Stone Bear.
[1 image] END_OF_DOCUMENT_TOKEN_TO_BE_REPLACED

Some of you may have noticed a gig on at The Squirrel in Coventry on Saturday 21st October entitled "Anthony Harty featuring Sam McNulty and ...
[1 image] END_OF_DOCUMENT_TOKEN_TO_BE_REPLACED