"Your Heart is in My Chest" by Luke Concannon 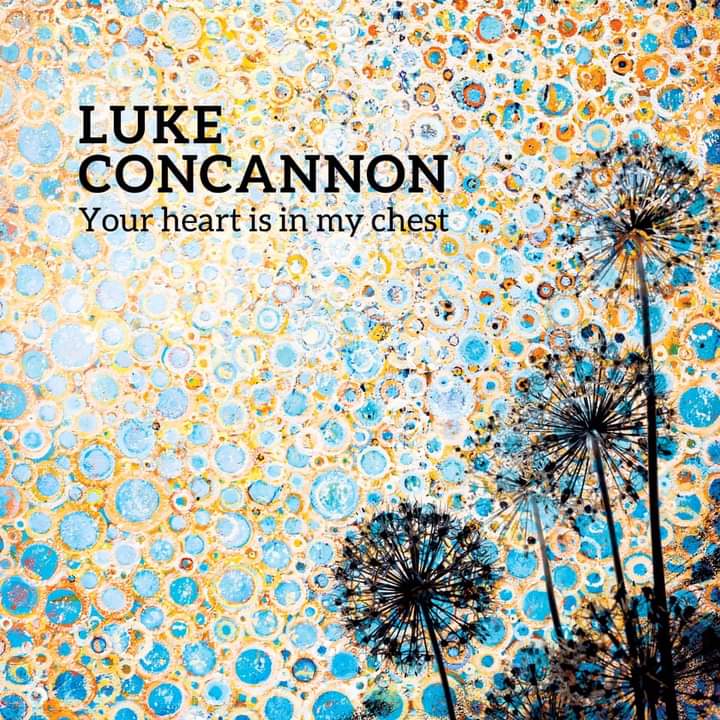 If next February seems still an awfully long way off to wait for the release of 'Ecstatic Bird in the Burning', the next album from Luke Concannon, then at least he is allowing us substantial glimpses of it in the meantime, starting with the startling "Doing Nothing"  which I told you about at the start of this month: a tour de force of great writing & performing in which Luke demonstrates how he can combine both frank personal insights & self reflection with a great sense of humour & humanity. Since I wrote that review, he has also released a stunning video which you can find at

I urge you to check it out: it's one of the most imaginative & touching I've seen in a long while.

Hot on its heels however comes a new single, "Your Heart is in My Chest". There is an online launch party on   6th November at 8 pm featuring performances by Luke with Stephanie Hollenberg, Ruairí McKiernan and Darius Christian: the latter playing a set of his own songs & the former discussing his book "Hitching for Hope'.

A real contrast with its predecessor, this new song opens with a most powerful a cappella section with massed chanting which to my ear displays roots in Africa. A love song as the title suggests (though probably every Luke song could be described as expressing love for someone, whether an individual or a wider community), after such a start, it switches into a much more intimate delivery: hushed as if he was singing it right into the listener's ear and it reminded me a little of the style of Nick Drake (coincidentally another Warwickshire songwriter of course). As harmonies & further instrumentation enter the mix & his voice rises in passion, that sense of one to one never leaves us.

The arrangement is delightfully sparse, leaving us the chance to hear & absorb everything which is going on, and is, as so much of his work is, as much a jazz tune as a folk one: not that rigid adherence to a genre has ever been his approach.

The quality of lyrics match that of the arresting song title (I honestly can't think of anyone else in the long history of love lyrics to use this idea: top marks for creative thinking) with a string of well crafted images.

Sometimes the most passionate songs shout their intentions from the rooftops: others provide as much via this sort of intense approach & who could argue which is the more effective? At any rate, you are left in no doubt at all as to the honesty of his feelings: like the previous single, which spoke the truth inwards, this track speaks similarly to another.

As I'd been in contact with Nizlopi singer/guitarist Luke Concannon regarding the release of his brand new solo album 'Ecstatic Bird In The ...
[1 image] END_OF_DOCUMENT_TOKEN_TO_BE_REPLACED

One of the most anticipated albums to be issued by a Coventry & Warwickshire artist has to be 'Ecstatic Bird In The Burning' which Luke ...
[1 image] END_OF_DOCUMENT_TOKEN_TO_BE_REPLACED

In advance of the full release of his new album 'Ecstatic Bird in the Burning' in February, Luke Concannon is this week sharing a third ...
[1 image] END_OF_DOCUMENT_TOKEN_TO_BE_REPLACED

Today, I'd like to draw your attention to a new single to be released on October 2nd from across the Atlantic: quite an unusual review for an ...
[1 image] END_OF_DOCUMENT_TOKEN_TO_BE_REPLACED