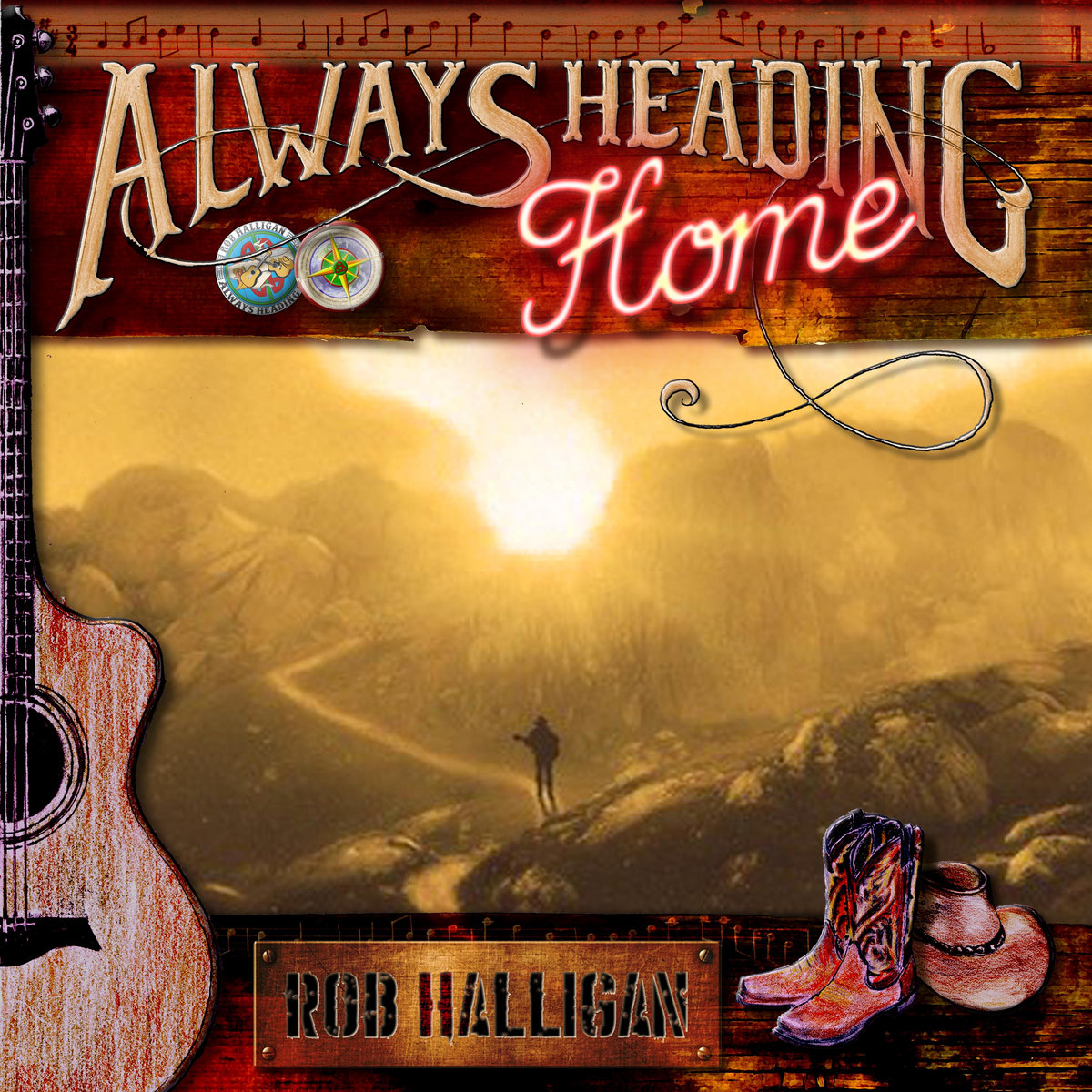 During the last eight months, I have reviewed releases I had some inkling of in advance, a few well in advance, some complete surprises & some long anticipated. I can't however think of any I had more advance awareness of though than the new album ‘Always Heading Home' by Rob Halligan which is now available. It must have been well over a year ago that I became aware of the dates for the tour Rob had planned to accompany it: dates which of course have largely been postponed (but thankfully not cancelled). It is so clear how much thought & love he had put into what was obviously planned to be a very special year & it is hugely disappointing that his plans were disrupted in this way. The fact that this is his 13th album I'm sure in no way contributed to 2020 going so awry.

So is this primarily an excuse in regret for him from me? Well, it is a bit (how could it not be?) but I am really pleased to say that he has adapted brilliantly & seized the opportunity to create songs he would not otherwise have written & thus we can see that the tracklist of ‘Always Heading Home' as originally conceived of is not what we see before us today (especially if you have the beautifully designed package in front of you as I am fortunate enough to do.).

I'm sure the album as first  planned would have been up to Rob's usual high standards, but I can't help but think that the turn it has had to take not only introduces some heartfelt new songs which arose naturally out of this extreme situation & hence have a very high level of truthfulness, but the unexpected songs not only complement those already created but perhaps tell the whole story even better. This can broadly be described as one of a journey with its consequent bumps & turns and as Rob is as interested in describing spiritual progressions as much as he is literal or figurative ones, it is enhanced by working on multiple levels. As he says in his frank & revealing sleeve notes, we are all going through "a rollercoaster of emotions, memories, hopes, anxieties and gratitude" but I think we can all attest to currently experiencing these at higher levels than normal years present us with & even more crucially we are all experiencing them together at the moment….

So what of the collection in detail? Forged with the help of collaborators such as Graeme Duffin (of Wet Wet Wet) , Ewan Cameron, Sandy Jones, Chris Haigh (on fiddle from a distance), Chris Hunt & Pete Banks, lockdown also enabled home recorded tracks such as "The Other Side" and You Never Can Tell" to feature Jean & Nikita Halligan.

Several tracks have already been issued as singles and reviewed in "Hot Music Live" since February: "Nothing Good Is Wasted", "The Other Side", "Come Take Your Place", "Promised Land" and "Homeward Hie" so rather than repeat myself, since my appreciation of each remains constant, you might like to revisit those reviews to remind yourself of the songs and my thoughts thereon.Of the other songs, three are effectively covers (or half covers) with the traditional "Row On" containing a new original central section which in turn was the genesis of "Homeward Hie" and "Come O Thou Traveller" is Charles Wesley hymn set by Rob to a new tune while "Wayfaring Stranger" is another traditional song which like the other two fits snugly into the theme of the vicissitudes of the road being assuaged by a warm welcome & hearth at its end."We All Write The Stories" has been a really central part of Rob's live set for quite some time: indeed it can be seen as the axis around which his other songs all spin and hence two versions appropriately bookend the album proper. The other songs, being the title track (clearly predating lockdown) and the very recent "You Never Can Tell" (obviously not) tell their own tales: the former being a very universal poetic expression offering hope despite the problems of our journey through life while the latter is much more focused on two distinct figures within a loose narrative, though as we don't learn too much about who they are, I think we can safely absorb inclusive application here as well.

It's a really beautiful collection both in the detail of the playing & words & of course the sentiments, but even more than this, it is the awareness of how it evolved & how it became a response which gives it a special force. Few albums contain notes detailing their own journey, so although most do reflect all sorts of emotions the artists went through making them, we seldom learn these aspects or forget them: in the case of ‘Always Heading Home', the facts are there for us to read for posterity & to enlighten new listeners in years to come. Maybe they'll have a little mist in their eyes by the end as I did…..

I'm much obliged to Rob Halligan who has been in touch with me to ask me to pass onto readers of "Hot Music Live" the details of Motofest 2021: ...
[1 image] END_OF_DOCUMENT_TOKEN_TO_BE_REPLACED

Although his spirituality informs & enriches virtually all his work, in April 2019 Rob Halligan released a very explicitly sacred collection of songs ...
[1 image] END_OF_DOCUMENT_TOKEN_TO_BE_REPLACED

Fresh out today is a live album of the special lockdown gig which Rob Halligan played at Coventry Cathedral with the help of Ewan Cameron and Chris ...
[1 image] END_OF_DOCUMENT_TOKEN_TO_BE_REPLACED

Today marks the release of the new Rob Halligan single entitled "Bigger Than Me", a swift follow up to his ‘Christmas Time' EP and as ...
[1 image] END_OF_DOCUMENT_TOKEN_TO_BE_REPLACED

Rob Halligan is another of our local musicians who could certainly be described as "prolific" in terms of just how much excellent music they are ...
[1 image] END_OF_DOCUMENT_TOKEN_TO_BE_REPLACED

Rob Halligan fans will have felt blessed over the past week with two separate releases which I hope you won't mind my telling you about in a ...
[2 images] END_OF_DOCUMENT_TOKEN_TO_BE_REPLACED