"Something Real" by The Upsiders 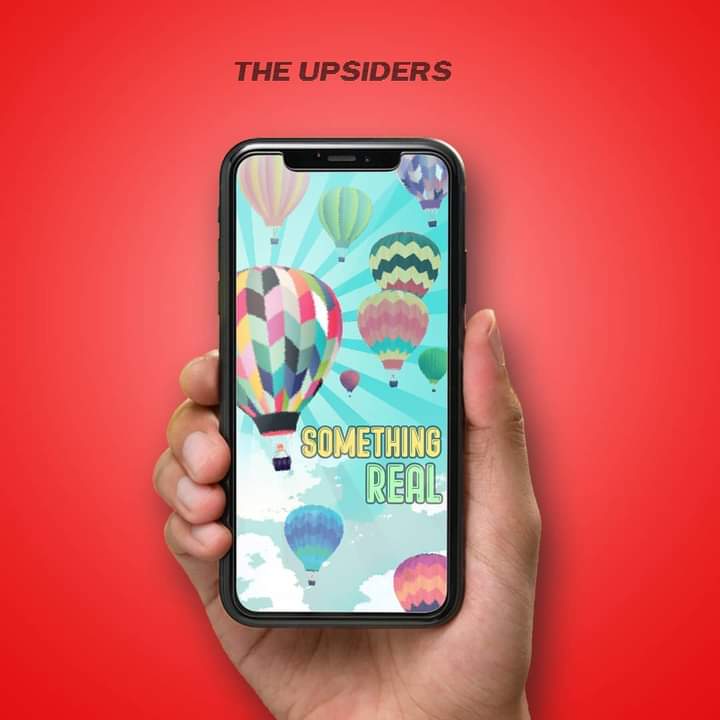 The last chapter of The Upsiders' "Reconnect" song cycle, "Ooh Na" (reviewed in the magazine last month), found protagonist Kenny, while at least at no lower ebb than the nadir of "21st Century Man" had left him at, reflecting on moments in his past life to a Caribbean styled soundtrack.

Now with the release of a new instalment (number six of nine) "Something Real", (written by Callum Maciver), the story moves onwards and (literally) upwards. In fact in terms of narrative there is far more plot development of the overall story than in any previous segment: both regarding Kenny's story and even more importantly perhaps in advancing the band's manifesto around reconnection with the real world and the complex and worthy individuals within it, at the expense of lessening use of  alienating & distancing technology. Generally I really just want my reviews to offer insights into great music with the aim of persuading people to check it out: I certainly do not want to provide spoilers which diminish the impact when you do get to listen to something: that applies especially to reviews written before release (as this one is: the record is available from Friday though currently available to presave) and even more when a carefully crafted story is at stake. All I will say then is that a character makes an unexpected reappearance, an element of social reconnection is made (through a degree of trauma) and a breach with technology occurs.

Curiously (some of the more reflective & sad previously issued songs had really upbeat tunes), this one, despite representing an upward swing in Kenny's journey, begins in a restrained piano ballad format but as his progression moves along in its arc, so does the music shift into a more joyous, soul orientated bounce & groove (again musically distinguishing it from its predecessors). I suspect that The Upsiders are simply genetically irrepressible: give them a grave & sombre lyrical theme & they'll play along with it for a few bars before kicking off the restraints and embracing the uplifting instead. This one really soars (the metaphor works well with the narrative in this respect) and the instruments pile into the mix: guitars, brass & Nathan's wonderful Cajun accordion….

They have got the tone spot on for this track & even if you hear it as a standalone (I hope you do play the sequence through when complete as it clearly means much to them & they have worked so hard at it), it will raise your spirits sky high: the band can't wait to play it live & it will certainly get the feet moving & the arms waving when they do. As for Kenny, let's hope this is the first of a series of increasingly joyous episodes in the final third of the cycle.

Incidentally, now might be a good moment to pay full credit to all those involved in the "Reconnect" project:

So here we are, as we always knew we would be, at the final instalment of the "Reconnect" project by The Upsiders, the single "Intermission" which ...
[1 image] END_OF_DOCUMENT_TOKEN_TO_BE_REPLACED

I feel a little sad now we suddenly find ourselves at the penultimate instalment of The Upsiders' "Reconnect" project: today's new single ...
[1 image] END_OF_DOCUMENT_TOKEN_TO_BE_REPLACED

Today, we reach episode seven (of nine) in the "Reconnect" project of The Upsiders: "Bobbie Boat".
[1 image] END_OF_DOCUMENT_TOKEN_TO_BE_REPLACED

Now we are in the heartland of The Upsiders' "Reconnect" project, not only are the cumulative emotions of the arc of protagonist Kenny's ...
[1 image] END_OF_DOCUMENT_TOKEN_TO_BE_REPLACED

I do hope that you have been following successive instalments of The Upsiders "Reconnect" project as they release them & we review them in the ...
[1 image] END_OF_DOCUMENT_TOKEN_TO_BE_REPLACED

I must have been a bit naive when back in late March I assumed that my articles in the magazine would become more infrequent: obviously there has ...
[1 image] END_OF_DOCUMENT_TOKEN_TO_BE_REPLACED