"21st Century Man" by The Upsiders 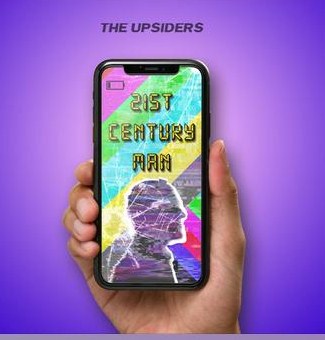 I do hope that you have been following successive instalments of The Upsiders "Reconnect" project as they release them & we review them in the magazine.

I spoke a couple of weeks ago about the third chapter, "Sush on the Roof" and how its good humour had brought a smile to my face.  I should have known better than to assume it would be all plain sailing for their protagonist Kenny and that he'd have struggles ahead of him as the band present us with the sharpest of emotional U turns for  the next part, namely the single "21st Century Man" which comes out tomorrow. For those like me investing emotionally in his journey, it was quite traumatic,

Narratively, the date on the Birmingham Library roof did not go as well as we might imagine from episode three. Steph seems to have spent much more time engaging with her phone than Kenny & consequently the latter has rebounded into a state where he despairs of real connection & in turning to the internet and  is spiralling into depression. Reflections on why people prefer to express themselves through social media "likes" rather than actual engagement abound as do thoughts on people's need for validation & the inevitable profound effects on the socially vulnerable. The song's title makes clear their worry that this is something we are evolving into.

Musically, the song doesn't however descend into any sort of gothic gloom: the band still sticks to their signature upbeat groove (thankfully) albeit somewhat a more sombre one, and that by itself signals the long term optimism I'm staking my money on for this song cycle.

Nevertheless, there is an extra earnestness in the single which if it doesn't go quite as far as outright angst, certainly sits at the "serious" end of the spectrum of their work. Much more wordy than the dance orientated songs which make up much of their body of work (and indeed its predecessor), the piece asks us questions (literally).

I've been playing each song as it comes out & while each successive release obviously adds to & progresses the arc, I am still not yet at a point where I can evaluate each one within its entire context: that can only come with the completion of "Reconnect" of course. However even so, once they are all together, this track will I am sure be a key moment in the sequence & shake us up when we come to it. This is a powerful thing: too many songs in a row of a similar feel & message would diminish the impact & shocks to our system also cause us to pay greater & deeper attention: moreover the band are trying to tell a human centred story & human lives do have highs & lows & abrupt changes of pace & tone.

I'm still hoping though that things look up for Kenny in the next song....

So here we are, as we always knew we would be, at the final instalment of the "Reconnect" project by The Upsiders, the single "Intermission" which ...
[1 image] END_OF_DOCUMENT_TOKEN_TO_BE_REPLACED

I feel a little sad now we suddenly find ourselves at the penultimate instalment of The Upsiders' "Reconnect" project: today's new single ...
[1 image] END_OF_DOCUMENT_TOKEN_TO_BE_REPLACED

Today, we reach episode seven (of nine) in the "Reconnect" project of The Upsiders: "Bobbie Boat".
[1 image] END_OF_DOCUMENT_TOKEN_TO_BE_REPLACED

Now we are in the heartland of The Upsiders' "Reconnect" project, not only are the cumulative emotions of the arc of protagonist Kenny's ...
[1 image] END_OF_DOCUMENT_TOKEN_TO_BE_REPLACED

I must have been a bit naive when back in late March I assumed that my articles in the magazine would become more infrequent: obviously there has ...
[1 image] END_OF_DOCUMENT_TOKEN_TO_BE_REPLACED