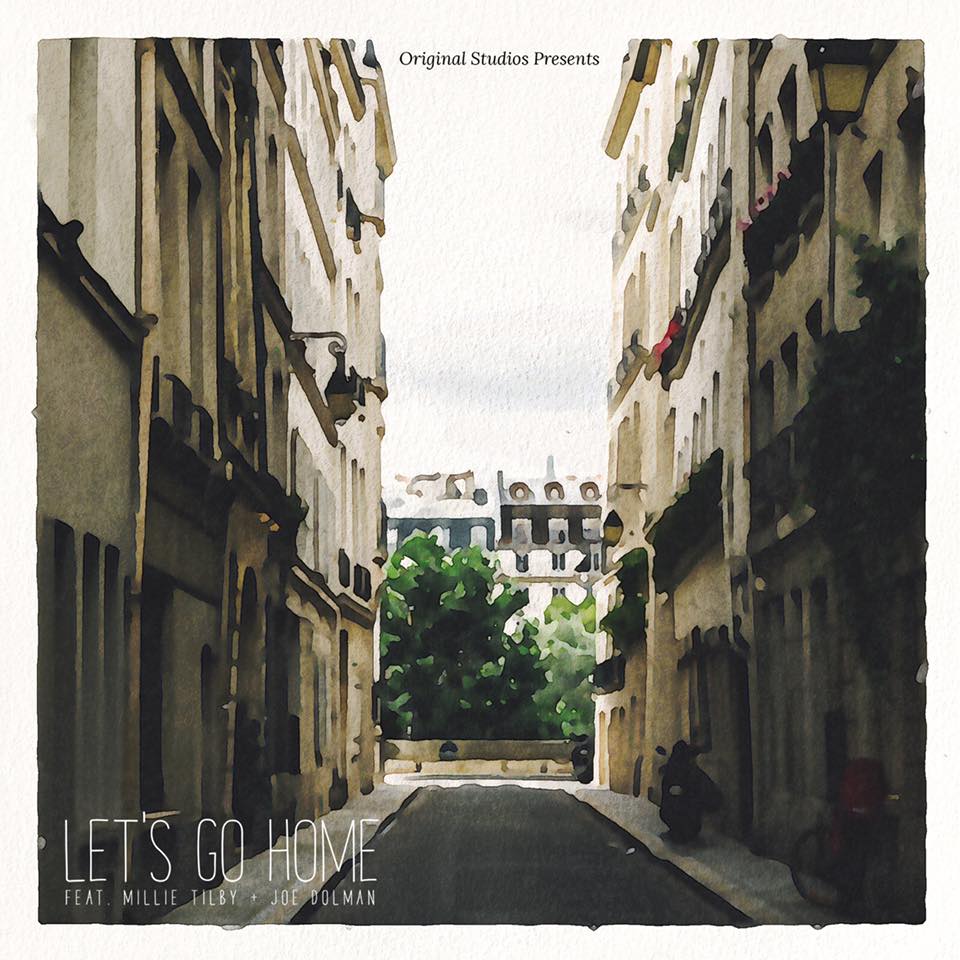 This is rather an unusual release to be reporting on. Firstly because the publicity seems surprisingly low key considering the magnitude of one of the artists at least & secondly because the idea of Joe Dolman duetting with another singer on a single is a most intriguing one.

In this instance, Joe's collaborator on "Let's Go Home" is Millie Tilby. As I don't know too much in the way of background, I'll have to build this review around the track entirely on its own merits (which I'm sure is no bad thing for any objective review).

The single cover appears to show a Parisian street & that may be our first clue as the song turns out to be a very warm jazz style song which sits very snugly in the chanson tradition of that city: if so many of Joe's own solo songs can be categorised as clearly within a contemporary form of balladry, this one is almost certainly the most overtly retro feel of a track I can recall him performing on: and that is a positive statement as it offers such contrasts to his other work, shows his breadth & frankly I liked the track a great deal from the first listening.

Both Millie & Joe demonstrate both love for & understanding of this genre (this is a song which might have been recorded any time in the last ninety years, even if its production values don't fool us into mistaking it for a 1930's record) and the lyrics reflect that timeless appeal of the tune & arrangement.

The vocal arrangement is a canny one too: each singer has a solo verse & then we get all sorts of subtle blending, harmonising, answering and other associated interplay.  At times the voices which work so well together in terms of tone, pitch & phrasing are tricky to distinguish. Well done to whoever had the idea of pairing them.

Credited to Original Studios, a collective of songwriters, producers and performers run by Alex Hart, the song was written by Alex and remixed & rearranged multiple times in recent weeks by artists collaborating with the studio.  It will it be  interesting to see whether this is a one off for Joe or the start of a longer term collaboration. I hope it is

The spot on piano playing which is another glory of the track is courtesy of David Plumb, as is the mix.

As I say, this has rather crept out into the public light but that in no way reflects the very substantial artistic & emotional merit of this single. Now go and listen yourselves please.

I honestly can't say that I was too surprised by the release today of an acoustic companion  EP to Joe Dolman's most recent ...
[1 image] END_OF_DOCUMENT_TOKEN_TO_BE_REPLACED

It's that moment for Joe Dolman which fortunately comes to some creative artists on a roll when you've last released a single as good as ...
[2 images] END_OF_DOCUMENT_TOKEN_TO_BE_REPLACED

Out today from Joe Dolman is his latest single which rejoices in the title of "Strangers", the follow up to the successful "Real World" which itself ...
[1 image] END_OF_DOCUMENT_TOKEN_TO_BE_REPLACED

It's been above a year since I last got to review a Joe Dolman release (his collaboration with Millie Tilby "Let's Go Home") so it's ...
[1 image] END_OF_DOCUMENT_TOKEN_TO_BE_REPLACED

I have recently accused Joe Dolman of being prolific in his output and here he is again with a brand new release a month since I last reviewed him.
[1 image] END_OF_DOCUMENT_TOKEN_TO_BE_REPLACED

I think that we can all by now agree that Joe Dolman is one of the most talented & popular artists from Coventry & Warwickshire & to that add "one of ...
[1 image] END_OF_DOCUMENT_TOKEN_TO_BE_REPLACED