"Worth A Million" by The Upsiders


"Worth A Million" by The Upsiders 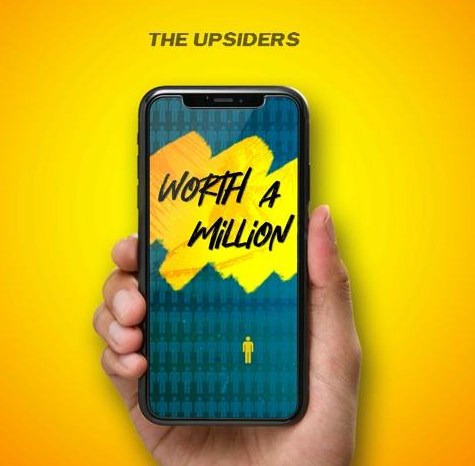 As I write, the very first  shoots of live music performance recovery seem underway: a few people including members of Evergreen & Chessi O'Dowd have ventured onto the streets to busk in the sun & a few others have announced outdoor gigs. May this trend increase dramatically over the next few weeks.

There is no getting away from the disappointments of such a dearth of live music & it must have hit the band I'm reviewing today as hard as anyone, given their high octane, effervescent performances & how well they are received. Yet the same band also personify another trend, which in no way makes up for the loss of gigs, yet is great compensation. When I look back at the reviews I've written since March, I'm actually taken back by just how much great music has actually come out of the local scene despite everything else, and how diverse it all is. Looking at each one in turn had rather distracted me from the scale of the whole set.

Today therefore, I am able to tell you about the forthcoming single "Worth A Million" by that very fine & very popular band The Upsiders (it comes out on Friday 24th July to be exact, though you can pre-order it now to make sure you get your copy).

In fact Callum tells me that this is only the first of nine songs to be released over the coming months as part of their 'Reconnect' project which will follow a contemporary figure as he attempts to "form genuine connections with the world around him". I have previously written about how several artists have seemed almost psychic in their recent releases, written before lockdown but seemingly speaking about it: here we have another: how many of us will need similar journeys of exploration in order to reset our relationships with the world & others after only connecting online for months? I'm sure I shall.

As you'd expect from The Upsiders, the song is upbeat & optimistic, and "celebrates everyone's inherent worth regardless of fame, fortune or status": we are all "Worth A Million" in fact. Speaking for myself, I wholly agree.

The sun shone out of my speakers as I played the track & once these guys get themselves onto a stage again, you'll be dancing to it. You'll probably want to hug those around you too as the song reeks of a communal spirit, so let's hope the social distancing requirements can be safely resolved by then.

The styles which float in and out of the mix reflect the sense of summer: instrumentation which echoes both African high life & Caribbean rhythms &  a rap section alternates with the singing (which builds up to an anthem, emphasising the community spirit still further).

It's a subtle piece & it will be fascinating to learn in time how it fits in with the other eight songs. It's light and breezy on the surface so you'll love it & you'll move your body to it. However it speaks also to your mind & hearts as the points it makes are serious & profound: if this is The Upsiders' manifesto, then they certainly have my vote.

So here we are, as we always knew we would be, at the final instalment of the "Reconnect" project by The Upsiders, the single "Intermission" which ...
[1 image] END_OF_DOCUMENT_TOKEN_TO_BE_REPLACED

I feel a little sad now we suddenly find ourselves at the penultimate instalment of The Upsiders' "Reconnect" project: today's new single ...
[1 image] END_OF_DOCUMENT_TOKEN_TO_BE_REPLACED

Today, we reach episode seven (of nine) in the "Reconnect" project of The Upsiders: "Bobbie Boat".
[1 image] END_OF_DOCUMENT_TOKEN_TO_BE_REPLACED

Now we are in the heartland of The Upsiders' "Reconnect" project, not only are the cumulative emotions of the arc of protagonist Kenny's ...
[1 image] END_OF_DOCUMENT_TOKEN_TO_BE_REPLACED

I do hope that you have been following successive instalments of The Upsiders "Reconnect" project as they release them & we review them in the ...
[1 image] END_OF_DOCUMENT_TOKEN_TO_BE_REPLACED