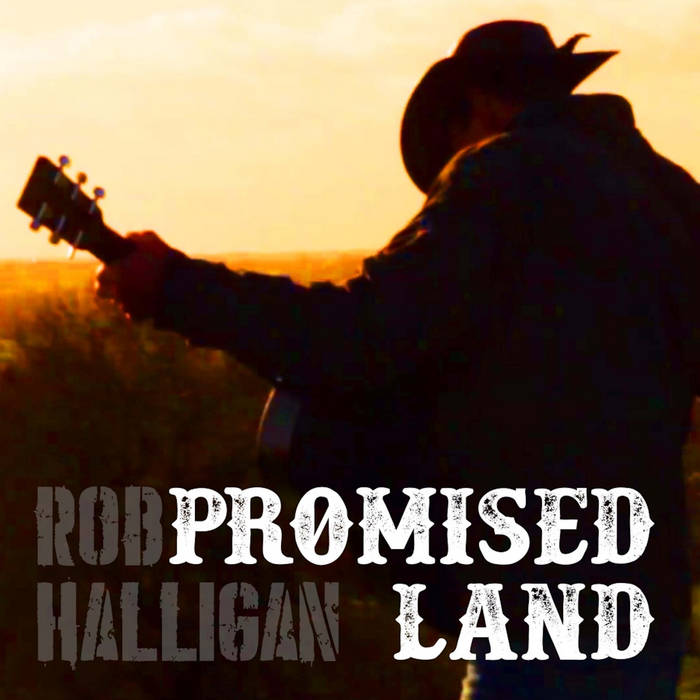 A strange one this, the latest single release from Rob Halligan: "Promised Land" which comes a month after his previous one, "The Other Side" was reviewed here. (I only found it on Bandcamp so I'm not sure if there is anywhere else you can currently buy it).

‘Strange' because apparently it has gestated over twenty years & unless anyone can correct me, I'm not sure I've written about any other song like that.

It's been in his set occasionally & drawn praise from audiences, but I can understand why this was something Rob must have felt he wanted to get right before releasing.  It is a song born out of what seems to be a great deal of soul searching & reflection on his part, pondering on where he is in his career & whether the sacrifices he has made so far have been worth it. He wonders in the lyrics if his "dreams are out of reach" and in writing about the track, he does bandy the word "regret" around.

Personally I feel that if he is asking questions in the song (which he undoubtedly is), though such are primarily ones he is asking of himself, once he has put them into the public sphere, he is also putting them to us & can't quibble if we offer responses, however presumptuous they might be.

As you might guess, my instinct is to encourage him to travel further down the road: evidence of success in his audience feedback & demand for live appearances must count for something & in this day & age there seem many routes to wider appreciation: yes a huge part of the commercial side of popular music is geared towards very young artists being snapped up by major labels & that route is probably no longer open for Rob, yet that way is also the way of homogenised product too often: it is not the way we celebrate in "Hot Music Live" so often, of individuals creating true music in their own voices and there is a considerable audience for artists like that. Like he is.

I think deep down Rob must have reached some sort of similar conclusion: the song has its angsts yet tends very much to the optimistic: he has decided to "count (his) blessings" and he does lay down something of a personal manifesto as well as a road map forwards: almost defiant as to the doubts he has had. With fewer other commitments to currently distract him (and it would seem that trying to juggle his time between these & music & failing to do justice to either is part of his regret), I can see why once his touring resumes post-lockdown, he can't kick right back off with renewed determination.

Given the frequency of spiritual themes in Rob's work & particularly the focus of his last single, I looked at the song with the question in my mind as to whether the "Promised Land" was the same place he was last singing about: I suspect that meaning probably is in there too, at least metaphorically, but  in a secondary sense this time.

I spoke of Rob creating music in his own voice: that absolutely applies to the very personal & direct lyrics, but his singing also has a rather different quality to his normal delivery: possibly the nature of the words has somehow had that effect? It's a sort of hybrid vocal performance, with American country patterns yet a recognisably British accent...... The music is probably the element people will talk about least, but it's a real gem as it manages to sound beautifully simple while pulling off the substantial trick of being able to convey melancholy & uplift within a few moments of each other within the same melody & arrangement.

Rob would like to play the Albert Hall at some stage in his career. It's not looking on the cards just yet, but I hope he makes it..

I'm much obliged to Rob Halligan who has been in touch with me to ask me to pass onto readers of "Hot Music Live" the details of Motofest 2021: ...
[1 image] END_OF_DOCUMENT_TOKEN_TO_BE_REPLACED

Although his spirituality informs & enriches virtually all his work, in April 2019 Rob Halligan released a very explicitly sacred collection of songs ...
[1 image] END_OF_DOCUMENT_TOKEN_TO_BE_REPLACED

Fresh out today is a live album of the special lockdown gig which Rob Halligan played at Coventry Cathedral with the help of Ewan Cameron and Chris ...
[1 image] END_OF_DOCUMENT_TOKEN_TO_BE_REPLACED

Today marks the release of the new Rob Halligan single entitled "Bigger Than Me", a swift follow up to his ‘Christmas Time' EP and as ...
[1 image] END_OF_DOCUMENT_TOKEN_TO_BE_REPLACED

Rob Halligan is another of our local musicians who could certainly be described as "prolific" in terms of just how much excellent music they are ...
[1 image] END_OF_DOCUMENT_TOKEN_TO_BE_REPLACED

During the last eight months, I have reviewed releases I had some inkling of in advance, a few well in advance, some complete surprises & some long ...
[1 image] END_OF_DOCUMENT_TOKEN_TO_BE_REPLACED