"Be Gentle" by Chloë Boehm


"Be Gentle" by Chloë Boehm 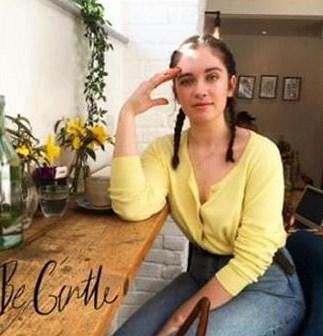 Chloë Boehm has very rapidly gained a highly positive reputation on the local music scene: it is mere months still since she first acquired a guitar, a few fewer since I caught her live for the first time & since then her debut single "Dare You" was reviewed in March in this magazine, followed by a more in depth profile & then that song of course appeared on ‘Hot Music Live Presents Volume Three'. By that time as you'd imagine, she had taken cover from the elements & our only sight of her has been via a series of live streams from her refuge using a borrowed guitar. A few technical mishaps aside (these inevitably go with the live stream territory), I feel she has shown an increasing confidence in these (I congratulated her only on Wednesday for what I thought was her best yet) with an engaging style of quite self deprecating (this is an artist who self describes as "honest & rustic") between songs chat to her audience.

Now she has released (initially on Spotify but with other platforms to follow) her second single, "Be Gentle". During her performances, Chloë has unveiled quite a lot of new material written during lockdown & been candid about the various inspirations. It is clear however oppressive it has been in many respects, this period has at least creatively stimulated her very effectively: and not just in the lyrical content. Her guitar playing maybe still in its relative infancy but she has a style of her own already and she has now branched out into piano playing as the current single is built around a combination of this instrument & a guitar (the two sounds blend so well together too). Really quite different from "Dare You" (none of her songs is particularly similar to another which is one key reason I and others rate her as we do), the sound is ethereal in tone and evokes correspondingly different emotional responses from its predecessor. Engagingly open in her vulnerability, Chloë requests sympathy and patience, yet I don't sense this is a song about weakness nor submission, but one of honesty about personal struggles and seeking not a patronising helping hand but one which all members of a fair & empathetic society should extend to each other at need. As such I think it applies well to our circumstances & even if its genesis lies in some deeply personal situation, its applicability to us all through extension is welcome.

It's a huge shame that just as Chloë was gaining such musical career momentum that her live performances were curtailed, but I truly believe that when they resume she will have a really substantial new repertoire to deliver: it may well turn out to have been a positive experience in that respect.

In the meantime, please do be gentle with one another.