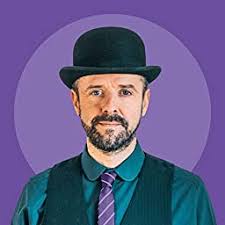 I feared that my reviews for "Hot Music Live" might dwindle during the current situation, with no live performances on which to report & the possibilities for new recordings being significantly limited.

However I had underestimated several factors including the ingenuity & commitment of artists (I really should have known better shouldn't I?) and the number of high quality tracks previously recorded which could still be released to entertain us & raise our spirits.

One such is the latest single from Mister Keith, namely "Dig a Little Deeper" and I'm pleased to be able to tell you about it for various reasons, including the fact that despite my admiration for his work, I think I have only ever reported on his live work & not a recording. So I can put that right: thanks for the opportunity.

Keith Ayling not only purveys (and I can't think of a more appropriate word to describe what he does with it) something called "Victorian Pop" but he certainly invented the genre (and how many people can say that?) and is probably its sole practitioner.

Don't however think that "Dig a Little Deeper" is some exercise in nostalgia let alone pastiche. It is a more contemporary sound than other previous releases (I honestly couldn't detect any obvious signs of the influences of either George Shearing nor Artie Shaw, his idols, but then influences do not always have to be overt do they?) yet builds upon the heritage not only of his earlier work but on the classic canon of songwriting. Featuring the bass playing of regular "Hot Music Live" review subject John Parker plus the mighty & massed Mister Keith Orchestra the song was produced by Dave Lynch at Echo Zoo Studios.

I find myself frequently tempted in reviews I'm writing in this era to read into the songs echoes of what we are all experiencing, despite realising that many of them must have been written & recorded before the clouds were dark upon our horizon: however we can attribute this not only to my own imagination but also excellent song writing which creates pieces with applicability to various circumstances. This is one such. Maybe the lights have gone down currently & now is the time we all need to dig a little deeper: well I can't argue with that and even if it was originally meant for some other set of circumstances, it fits today like a glove. The skill with which the tension is built up & relaxed underscores the power & message of the lyrics (listen out for the Mister Keith Choir) and so the song achieves what every good one should: it delivers emotional impact. Mister Keith thinks it is his best work yet. We should respect his opinion.