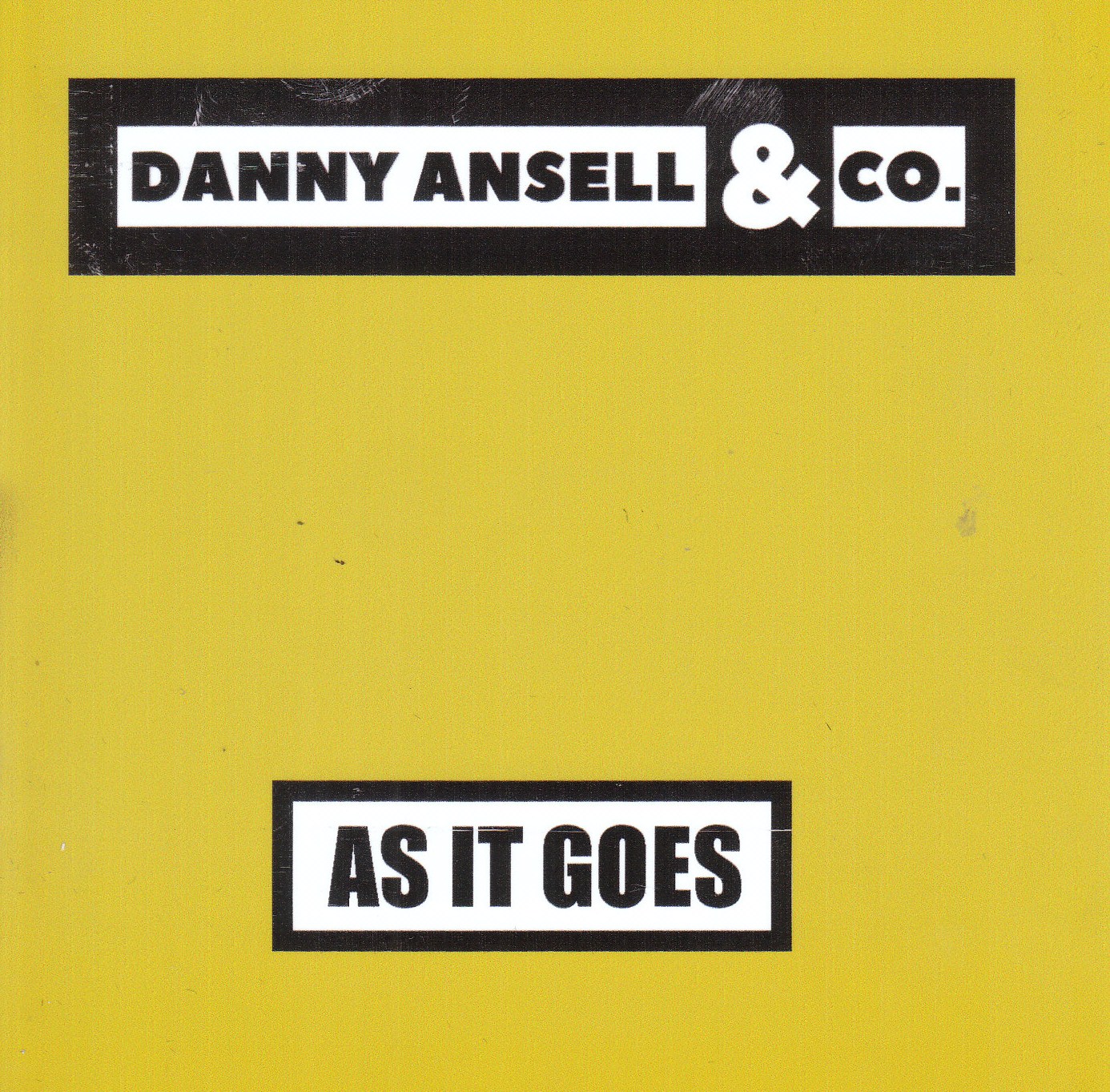 Pleased as I undoubtedly am to be reviewing "As It Goes", the brand new album from Danny Ansell & Co, there is no getting away from the facts that this is not necessarily the review Danny & I the band would have ideally liked me to be doing for you.

Firstly, as Danny himself put it yesterday: "our guitarist , family member and amazing musician Stephen Madden sadly passed away half way through the making of the album , the band overcome many emotional times and hard work to finish the album .."

Quite understandably the album is dedicated to Stephen's memory & quite apart from his great, tasteful playing, listen out for the track "Lemonade Wage" which he & Danny co-wrote.

Secondly, having spent a year working so hard to record the album at Born in a Barn Recording Studio & having to complete it in a state of grief, how disappointing that it has to be shared with the world at a time when this band who so enjoy gigging & do so very frequently, cannot do so in order to promote it.

That said, their method of honing each song to perfection before live & responding audiences means that if you are a fan of theirs' (and let's face it they are one of the very biggest local live draws), you'll probably have heard many of the tracks played on stage already. In fact "Satellites" came out as a single in January & I reviewed it in these pages: seems like a lifetime ago, back in the good old days of live gigs...

As I emphasised in that last review, Danny & his band have certain trademarks, some of which are easier to detect than others. The most obvious one is how popular & effective they are as a live act & how well the songs go down in the company of audiences: Danny has long been a "go to" artist for festival organisers both to draw in extra attendees & to whip up a powerful, communal mood once there: the songs tend to the anthemic & the sing along factor is as high as it gets.

Yet under these attributes there are many subtle lyrical & instrumental touches which perhaps are a bit easier to spot when playing the record than with your arms around the shoulders of person you are standing next to and celebrating the moment to a song you have pretty much learned the words to already.

Inside the songs are deeply human thoughts & reflections, vignettes of the lives we lead & what are obviously personal feelings & emotions: late night feelings inhabit more than a few of Danny's songs.

Due to the care with which they are created, arranged & recorded, this is a prime example of a "no filler" album. In fact it's quite unusual for me to be reviewing a genuine full album of songs developed over a long period & intended to be recorded and released as a set. Most artists these days seem to be putting out singles & EPs and even the wonderful Greengrass album I recently reviewed was originally conceived as an EP and grew with their enthusiasm for what they were doing.

So strong is this set by such a prominent local artist that it is tempting to express frustration at the lack of opportunity to hear them play it at a launch, but I'd rather not let negative emotions intrude on an album I've enjoyed playing & I shall just have to look forward to hearing it live when the chance is permitted.

So what of the tracks created by the band (Danny Ansell (guitars & vocals), Paddy ‘the Bass' Beard (bass & backing vocals), Roger Greasby (drums) and of course Steve Madden on electric guitar) and produced by Roger, Danny & Paddy?

Well like I said, "no filler" at all: eleven cracking songs and maybe the only problem is the sheer accumulated impact of playing so many dynamic tracks one after another: and you'll be very likely to get on your feet from the start and stay there.

"Satellites" deserved & received its own review a few months ago "a typically passionate song & one which makes its mark instantly upon your consciousness & memory": a fact which I suppose does raise the issue that if you do put eleven songs, all of which might make a great single, on one album, the intensity of playing one after another can be a bit overwhelming: listening to each individually is both rewarding & respectful of what went into each one.

"Police At The Door" is possibly the track which has so far had the most airplay & deservedly so. People might consider it Danny's finest song & I couldn't argue with them. Beautifully structured & played, with perhaps the clearest vocal sound I've heard on one of his recordings, the complex of emotions & reflections on life history, at times poignant, at others uplifting, ensure that there is always something to pick out each time you play it.

"Suit ‘em Up" is a quintessential live favourite style track, yet this again is really quite a sad song (most of the album is like this: he's not messing with your mind by mixing the catchy & the melancholy, but reminding us that the world contains all emotions & writing "real" songs must reflect this.) "Be yourself tonight" is the refrain... Good idea.

The album opener (and the song whose lyrics provide the title) is "Don't Give A Damn" and it actually sets the tone for what follows really well: nostalgic and ruminative, yet defiant with it with a slight celtic tinge to it.

At the other end of the collection comes "Answer's In a Bottle" which matches & bookends the first track in mood & tone & sends us off with a bit of a tear in our eyes: a brave downbeat way to leave us but one of commendable maturity with a strong message.

In its reference to dreaming, it harks back to the preceding, yet much more upbeat & blues tinged "Pocketful of Dreams": in fact many of these songs work well in pairs, telling different tales of similar subjects or answering each other: whether this complexity was planned from the beginning or was a serendipitous outcome of Danny's feelings during writing.....

The beautiful " Lemonade Wage" written with Steve lies in the centre of the collection & drifts along on another cloud of deep personal reflection: this is almost certainly the "lighter in the air" track for his concerts when they resume & works really nicely as an elegy to its co-writer.

"You Being You" is the album's romantic love song, the same beauty being present as on the other songs & yet again the soaring thoughts & vocals seldom last long without regrets creeping in: "we should be..." is the common thought here. As ambiguous as many of these songs are, Danny leaves it up to us to decide whether the people in the song will actually do the things he thinks they should be doing...

"Heart" seems to speak to the days we live in and is yet another one which would make a superb single: more very clear singing to another excellent restrained backing which sometimes swings towards Americana in style.

"Nobody Like You" is a bit more anguished than the others on the album and "All Alone at Midnight" could almost sum up the album which sounds like it was written in the wee small hours and certainly evokes them. Sounding somewhere between Irish music and American roots in style too.

Is this Danny's finest set of songs? There is a strong case for believing so. I like the way that though we have so many songs which don't really sound much like each other, nonetheless there is a great sense of an internal unity in tone and meaning: while not really a concept album, it does seem to be Danny's "State of the Union" reflection: trying to put into words his take on the mood of our times. Each track stands out completely on its own, yet taken as a collection they make an extremely powerful statement: life is complicated & there is much to regret & feel sorrow over, yet one can look forward optimistically even without knowing the details of the future. Melancholy suffuses the whole album yet it is not pessimistic. One which deserves our full attention though we have many other things to think about right now.