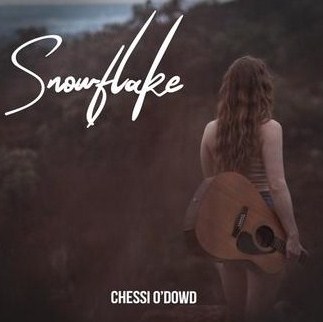 Two apologies to you all.

If everything had gone to plan, you would have been reading my review of Chessi O'Dowd's  ‘Wine Glass Filter' EP.

You should also have been reading my review of the launch event for the ‘Wine Glass Filter' EP by Chessi O'Dowd.

The postponement of the latter (I am sure you understand the reason) has led Chessi to return to the EP and given that its launch cannot take place as envisaged, has turned a disappointment into an opportunity & will add an extra track before its delayed release. So though we are denied this much anticipated record in the short term, ultimately it will be even greater plus our enjoyment will be heightened by the longer period of expectation.

However she has kindly decided to spare us the anguish of too long a wait by releasing the track "Snowflake" from the EP as a single in the interim. This will appear for download & purchase shortly but can be experienced in the meantime at:  https://soundcloud.com/chessiodowd/snowflake

This song (whose lyric actually generates the EP's title too) was recorded with the help of Dan Sealey  (Merrymaker, Ocean Colour Scene etc) & Baz Bayliss (Gospel Oak Studio) and was one of the (many) highlights of her live streamed gig on the Coventry Culture Show last evening.

Chessi selected it as its subject matter relates to the use of the noun (which of course is a thing of great beauty & uniqueness of pattern) as a pejorative term towards people who care about each other by those who prefer sneering to loving & supporting. A defiant answer (and melodic & catchy defiance is a key Chessi hallmark) to this cynical & bitter defilement of the word, "Snowflake" is ideal for these days when caring for each other & encouraging our friends to hope are so key.

The comments feed on last night's performance of this song indicated very strongly how much it touched those listening: and I was certainly one of them.

The backing track is effective at providing a setting for the vocals (and Chessi has a very distinctive delivery, extremely clear, yet she manages to make very incisive points & impressions upon us without the need for excessive volume or  grandstanding) and her guitar sits over the other instruments again foregrounding what are the critical elements of the song.  This is another respected  locally based writer with the utter confidence to be herself & hence be totally honest in what she says. Her voice  really doesn't remind me of anyone else's and the lyrical constructions are very individual too: mature & adult in the themes & imagery, using unusual rather than clichéd vocabulary & like artists who write only to tell it as they see it, pulling no punches. In fact the song appears to be directed at a single recipient, possibly someone seeking a relationship (there are "swipe right" references) but whom the writer sees as being completely incompatible in terms of their views of the world and those in it.

This is one of the best singles I've heard so far in 2020 (and the bar is already pretty high) and it is perhaps a good idea that we hear it first isolated from its companions from the EP. As a showcase for the latter it serves exceedingly well. It is also the first time I've written about Chessi in "Hot Music Live" and although it wasn't either of the pieces I was originally intending, "Snowflake' is so good that I can go to bed tonight a great deal less frustrated.

Way back in March 2020 I had just enjoyed the launch of the latest Izzie Derry EP and was looking forwards to the one for the Chessi O'Dowd ...
[1 image] END_OF_DOCUMENT_TOKEN_TO_BE_REPLACED

The last twenty or so months have to some extent made us all consider various aspects of time I think: such as how long has elapsed since we last did ...
[1 image] END_OF_DOCUMENT_TOKEN_TO_BE_REPLACED