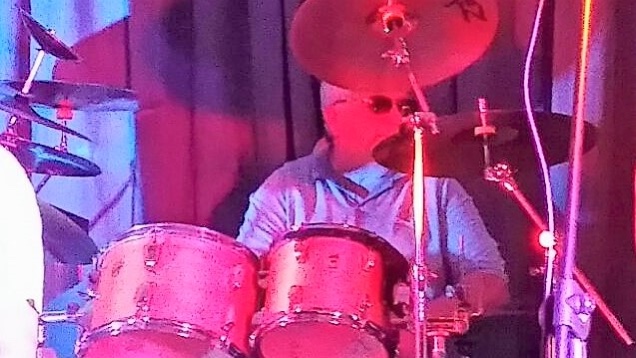 Steve is a very accomplished drummer having been in a lot of of bands playing different genres of music .
His wide experience shows in his playing as well as the unusual quirky bits he can add to any tune.
He is known as the 5th member of DABB4  a 60's covers  band whose 2 vocalists are known for there great harmonies plus they play their own material to and whilst there regular drummer Bob Brannan is on his annual golfing holiday in sunny Florida Steve has been doing an excellent job in his place bringing his own talents to the band and fitting in like a glove.

Question: what age did you start drumming?
Answer: My dad , from Cork Eire, used for a beer, the famous Holly Walk Irish Club in Leamington when he was alive ...and came home one Sunday afternoon with a snare drum!! Announcing to my Mother that a drum kit was also ready to be picked up for free - the drummer from the club had passed away!!  That day convinced me...it was drums forever!!  I was eleven years old. The kit was old Olympic version of cheap Premier drums -every ones choice at that time.

Question: what influenced you to start?
Answer: After playing this collection of drums and learning simple drum stuff for a couple of years I teamed up with some Leam College School mates, which were Nick Dee and Terry Bigley -we loved the style of The Edgar Broughton band from Warwick -Steve Broughton , the drummer was amazing. Nick Dee RIP became an amazing guitarist with local bands Cheeky - Concrete Parachute etc, both great bands.

Question: Which was the first band you played in?
Answer: I joined Leamington band Yampy with my bro in law as the vocalist and my friends Clive Hardwick on guitar and Steve Orley on bass and we gigged a lot locally at the time - then drifted apart.

Question: a little about bands you were in
Answer: My next music action was in Jersey CI where my pal Tom Morrison and I moved to - we worked all over the island doing anything to pay the bills ( and beer tab) and I joined a band in St Helier doing rock covers . The big music "up" change was my return to the UK mainland and having had a music gap of a few years I was asked to join the amazing Chilled Ice from the Cotswolds - we gigged everywhere down there and great times were had most weekends . The lead singer sadly passed away and we called it a day .

More recently ...after doing a Number of stand in "depping" drum jobs for a couple of years, I joined Henry's Rhythm and Blues Band ... a bunch of talented local musicians, we gigged a lot and tried for music perfection , but egos took over and it sadly came to an end. I played with brill guitarist Rob Reynolds- now Room 17 .. we were a rock covers band Black Fleck ...with Jack , Robs dad ( as the brilliant gig getting manager)it was very rock and roll!!!

Question: Music you like to listen to ?
Answer: My main music interest has always been the American soft rockers... Doobie Bros ... my fav all time band ever... plus Santana and Steely Dan plus Hall and Oates - seen them many times - they are awesome.
I guess the Doobie Bros- Steppenwolf-Alabama Shakes- Hall and Oates -Average White Band - Kenny Loggins and brilliant Gospel type drummers will always be my listen and learn.

Question: Do you practice a lot?
Answer: I never practice drums unless I am with a band situation - but sadly I love Ludwig the drum brand and sound of these drums...so I started collecting them - can't use them all on stage , but still collect them. I spend lots of time ensuring that the drums I use on stage sound as good as possible with tuning and latest technology for sound quality , even studio quality if poss.

FINAL addition by Steve
My unbelievable recent opportunity of playing with DABB4 has been exceptional in as much as the band is amazingly talented and has that rare ingredient of having band members that all get along enjoying each other's company - really hope they continue to ask me to stand in when the brilliant Bob B does his jollies!!!'

Sent from my iPhone