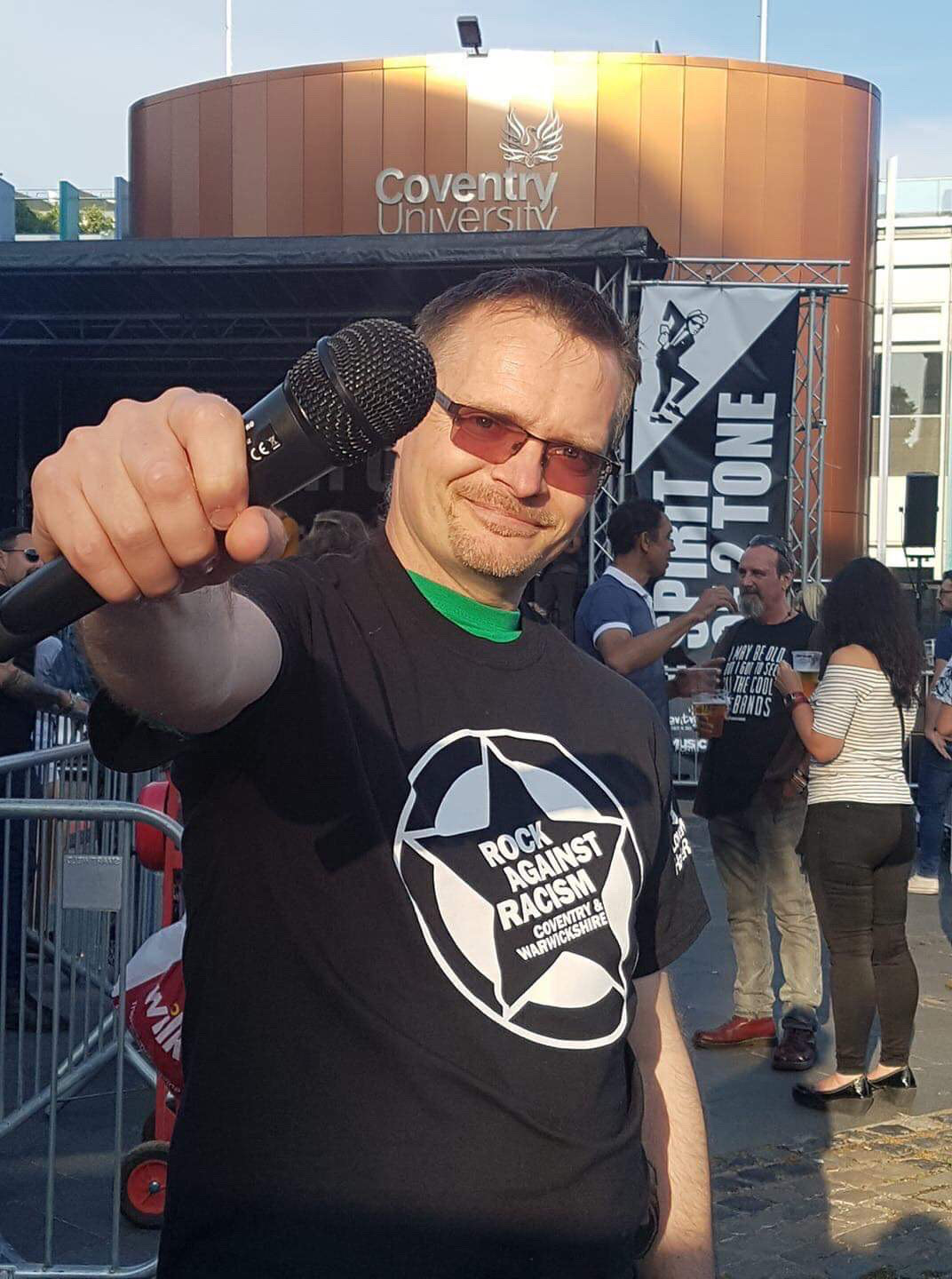 Just before I put the answers I submitted to Paul for this article I would like to express thanks on behalf of everyone for all the hard work he does to promote, encourage tirelessly week-in week-out to help bring artists of all types, all ages, all genres of music to the public eye. He does 3 radio shows 2 for HillzFM 98.6 and one for Radio Abbey.

Covering all sorts of topics, music and quizzes and a half hour that an artist takes over on his Radio Abbey show. He also is now regularly hosting his own open mics. I don't think he has time to sleep! The City of Culture is happening next year so this actor who could grace any West End stage with his presence, wordsmith who rolls comments like honey of his tongue deserves some recognition for himself. Make it happen Powers that be, let him host on a main stage at Godiva Festival in the front of the artists as one himself.

Now the questions I set and answers from Paul

Q.How did you get into presenting and any presenters that inspired you?

A: One day 5 years ago my friend went to the Watch Centre which is a work based recruitment company which is downstairs from Hillz FM. I heard a DJ on the radio and did not know who it was. I was told that the station was above and I asked how you go ahead joining? Several weeks later I did my first radio show 30 mins long and with no training at that time I was thrust into the world that is radio. I always liked Steve Wright and later Chris Moyles on BBC Radio 1

A: As of writing I am now presenting on both Hillz FM in Coventry and Radio Abbey in Kenilworth, I would love to have a paid job as a Radio DJ but no one has come calling as per

Q:What festivals would you really like to present at given the opportunity?

A: I am not one of these people who aims to present at Glastonbury or Reading. I would love to present at Godiva Festival on the main stages. But that goes down to the Free Radio gang.

Q: Are you planning to do more festivals of your own this year/charity events/open mics or actual gigs you are already booked to do?

A: Currently I don't have anything booked up. But I am free currently for the year ahead. I have a few little things in the works and further down the line I am in talks with City of Culture for a Big Festival Based in the city joining Radio together.

Q:How did you get to being a guide and have you had any funny or unusual happenings whilst doing this?

A: As a tour guide I bring my comedic elements to the tours, I always say you never really grow up and to make people giggle or laugh and say wow is a remarkable thing to do during a tour about history. Unusual happenings was a special guest appearance by a ghost who rattled a door handle mid tour when the door doesn't exist anymore.

Q: Did you do a stagecraft course before starting your acting career?

A: No. My Auntie passed away in 2010 and told me to follow my dreams so I did. I stepped into The Priory Theatre in Kenilworth and asked to try for a part in panto which I got and my first show was Dick Whittington in 2011.

Q:Any particular person inspire you to go into acting as in Rik Mayall for example?

A: Well Rik Mayall was always my kind of comedy and the zaniness of Lee Evans. I was a huge fan of Bill Murray for his ad-libbing and loved Whose Line is it Anyway? A show about Ad-Libbing. People think I was inspired by Billy Connelly but I love his incredible documentaries on his journeys not his comedy or acting .

Q: Do you find it easy to remember your roles/lines with your other busy jobs as well?

A: Hmmm! Since my small heart attack/Stroke my memory has been a problem and I at times have as I like to call them brain farts. I don't have many onstage but they do occur and can be incredibly embarrassing especially in non-panto shows. I do remember lines very well but find lyrics to songs very difficult indeed.

Q: Do you prefer comedy roles or like to try any?

A: I do prefer comedic roles as it's easy in my eyes to make someone laugh. Although I have been put down as a comedic performer I do love a Drama. I am waiting to play the murderer.

Q: Have you written any scripts if so what type? Pantomimes?

A: Yes I have written several. 4 pantos including Aladdin, Mother Goose and two brand new ones Cinders: The Story After Cinderella and The Greatest Showdame. I have also written Sapphire's Secret a dramatic piece a musical called The Letter and currently writing a horror Flight 357.

Q: Would directing be the route you would relish in the future or full time actor?

A: I would like to continue as an actor as I love the atmosphere of being onstage small or big productions and I am hoping to Direct this year or next.

Q: Have you written any poetry and if so is it accessible to anyone to read?

A: Yea I have written a lot of poetry some controversial some not. I wrote a poem based on a short horror story about a child battling a sprite in his bedroom with a twist in the tale. That was eventually released in a book about poetry.

A: Personally to be a paid actor and DJ . To present at Festivals or Gigs and try to make a name for myself and be taken a bit more seriously. Admittedly I'm new to all this so it takes time . That's about me. For others to get the Coventry music scene out to the world and get one if not two of these acts known in the modern world. We surely have another Specials and Enemy in our midst's?

Q: What choice of music do you like to listen to?

A: To be honest it differs from all styles depending on my mood. Have you not heard my radio showsðŸ˜‰

Q: Do you have any time for hobbies?

A: Acting, Radio, Live Music they are my hobbies. I do more voluntary work than actual paid work. I want to do more for charity but it's getting time to sort it all out 2019 was my busiest year and fatigue has set in even during three pantos over this winter. But we move forward and need to try and keep the music scene the acting scene and my own future prospects surviving.

My finest personal achievement last year was Putting on a Festival and a one night gig. But also promoting a small child's charity in Paddy's Plea. Myself and two esteemed musicians spent a day thanks to a lot of wonderful locations who helped us put this awareness together and that was performing a song at each location in a day we did in the end 24 locations and 28 songs. Well done to both Taylor-Louise and Matt Cattell.

One final mention goes to the Local Charts. Originally I went to a few open mics and asked questions if they had a chart which the answer was no. So I decided to put a chart together with help eventually from Hillz FM who these days have really taken a lot of pressure from my shoulders and do a lot behind the scenes that many people do not realise.  Nadia in particular. But what I never expected is that the chart would ignite a passion from local music in all areas of genre and they all listen to one another's music. This networking has helped produce collaborations and awareness of different styles of music within the Warwickshire area. Some do not like the voting process and that is fine. But it has taken away something that at times has looked sadly dying and given it that little spark that I hope explodes into producing a star. Might I add Brody Swain on the BBC CWR does an incredible job.