"In The Moment" by Henery 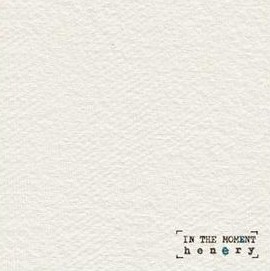 I first reviewed Henery & his music for "Hot Music Live" eleven months ago when I saw him  supporting Ellie Gowers: "Henery was a revelation. This was, he told us, his first solo gig of his original material in half a dozen years...... he has some extremely well crafted songs" and when I saw him a few months later, not only was he as good if not better, but played several different songs to the ones he had played first time. Even then, he clearly had more than an album's worth of material strong enough to release & I sincerely hoped that would happen. At the time of course, his band the Ellipsis were his main priority & who could blame him for devoting his time to them? Sadly though, the talents & projects of all members have precluded their being able to spend enough time together on the band and so although no longer able to work together, we have had the bonus/consolation of John Connearn's debut single "First Things First (reviewed in "Hot Music Live" last month) and now the long awaited debut from Henery.

He has spent his time wisely, choosing which tracks to record & how best to do so. He has had the fortune to work with one of the best producers possible in John Rivers at Woodbine & I gather they have worked extremely hard to capture the songs precisely as Henery envisages them.

The first fruits of this collaboration is the single "In The Moment" out today. As you might imagine, the combined effects of having many tracks with the potential to be singles, a perfectionist approach to recording & the support of someone like John with his experience & taste, the outcome is a humdinger.

Like all great songs, it grabs you from the very first bar, opening with a most imaginative almost madrigal setting (how often do you hear that?), the haunting melody sounds totally fresh yet at the same time, almost timeless. An instant classic.

Exquisitely arranged & produced, the mix quite rightly places his voice prominently above the accompaniment & shows it off to great effect. It builds up nicely to add expression but not relentlessly so: it finds its own level quite early on & doesn't surge on to anything bombastic like a power ballad. It has strong dynamics yet retains a haunting, yet paradoxically also joyous, quality throughout.

This is superior writing: clichés are avoided whether lyrical or musical & it simply reeks of integrity of message. As a statement of intent this is an ideal start for Henery, demonstrating his compositional & performance skills with none of the commercial tricks of over production nor vocal processing which many seem to feel necessary to "fit in" with what mainstream radio favours. Nor does this sound like someone trying too hard to make an impression: Henery sounds utterly at ease & again this adds to the sense of truthfulness.

Just because he has decided to go down the route of originality rather than pandering to other templates by no means suggests that the song won't do well: if anything quite the opposite because it does stand out from the crowd.

This is a new solo talent for us to enjoy & one who possesses everything he needs to do really well. I look forwards to the album when it comes out & more live performances: I'm sure you'll enjoy both too.

The dignified single sleeve design is by Hannah Cromwell

I really haven't concealed my admiration for the solo work of Henery in this magazine have I? Starting with live reviews which not only revealed ...
[1 image] END_OF_DOCUMENT_TOKEN_TO_BE_REPLACED

One of the many disappointing aspects  of lockdown (and I write this on a day when I would otherwise have been anticipating Leamington Peace ...
[1 image] END_OF_DOCUMENT_TOKEN_TO_BE_REPLACED

In February (and how long ago that feels today), I had the pleasure of telling you about "In The Moment", the debut single by singer-songwriter ...
[1 image] END_OF_DOCUMENT_TOKEN_TO_BE_REPLACED