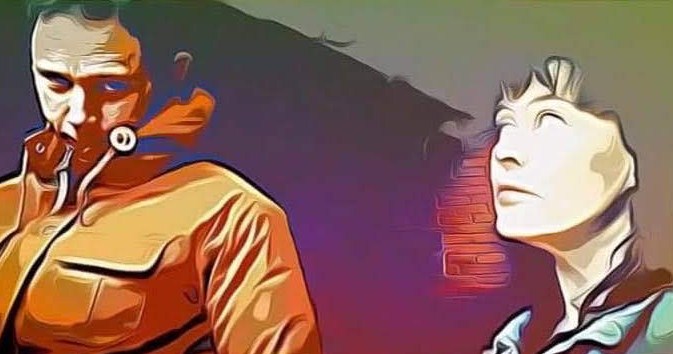 As promised, after my review of Kirsty Clarke's new track, "Greatest of Partners", I thought you'd like a piece on her other venture, another of the Coventry & Warwickshire bands about whom there is a significant current buzz, i.e. BERHN.

Essentially a duo comprising Kirsty and singer/writer/guitarist Dean Dovey whom you may remember from Hinckley/Tamworth indie band Mountain Jam and who now is also in On StandBy, the band also work closely with Jason Edwards (their producer who also adds some lead guitar, bass, instrumental effects & who structures their drum & percussion elements) and bassplayer Jeff Hateley.

Interestingly, although they lived close to each other & mutual friends had long urged them to pool their compositional & performance skills, Dean & Kirsty did not meet until a social occasion brought them together, but now they seem pretty much on fire, judging by the songs which have so far entered the public domain.

All come with excellent videos which complement the narratives of the songs extremely well & match the energy of the music in a way not all other music videos manage. You'll also hopefully enjoy, as I did, trying to identify the locations they were filmed in.

First up is the initial fruit of their collaboration,

"It Hurts" whose video can be found at: https://www.youtube.com/watch?v=blsn7pE8FfA&list=PLMhQwoVX5Cjzm4zw2diLXpO7ca_M_rNw2&index=4&t=0s

What a great way to start! I guess that if you have as much as their combined experience, the creation of something which really works first up is always going to be a distinct possibility, but I do feel that a strong debut gives any artist a career calling card which then opens the door to all the opportunities for live work, radio play & audience building.

An immensely catchy & attention seizing song very much in the indie mould (let's not forget that Kirsty is "Indie Mama"), the tune features Dean & Kirsty exchanging lead vocals effectively & here, so early in the life of BERHN we have the proof that it's going to work. Their writing might have been compatible but that alone is no guarantee that any two voices might be compatible, but they certainly are in a piece which clearly is a conversation & musically builds really well to a climax as well as lodging readily in the mind.

"Kiss Me" (currently doing well in the HillzFM local chart) is, if anything even better. Check it out at https://www.youtube.com/watch?v=VhPhvINFO5Q&list=PLMhQwoVX5Cjzm4zw2diLXpO7ca_M_rNw2&index=3&t=0s

Another great video accompanies a song in similar lyrically territory as "It Hurts", the world of grown up relationships, but more of a musically intense slow burning, again rising steadily in passion but this time less of a vocal conversation & more of a blending of their voices in a tale of slight desperation.

"I Need You" (their single from August 2019) shares similar lyrical interests with the others, the story of adult passions with layers of dysfunction, but in this case is framed in a more ominous & dark musical setting, reminiscent of post-punk stylings of say Bauhaus or The Cure & I found it extremely compelling as a result. See for yourself at:

All three songs out of the proverbial top drawer in terms of their conception & realisation: this is a relatively new act which has started with a bang & on the signs to date have considerable promise. The songs are really well made & should get increasing airplay. As for live work, I can't possibly see how they won't be extremely popular. I'd see them any day for sure.

It was a couple of years ago that we first told you about BERHN and now Kirsty Clarke and Dean Dovey  are back with their new single "Torn To ...
[1 image] END_OF_DOCUMENT_TOKEN_TO_BE_REPLACED