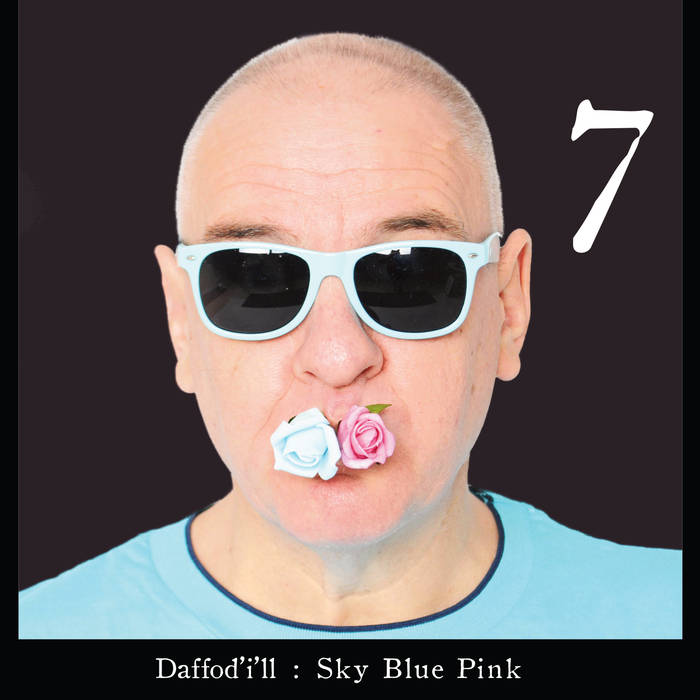 When recently I reviewed no fewer than three Daffod'i'll albums in one fell swoop in a catch up exercise, if you looked at the photos you'd notice both that Dill numbers each album & that I had not included number 7.

Well here then is my review of his seventh solo album, namely 2019's ‘Sky Blue Pink' (not to be confused with his eighth, ‘Pink Blue Sky' which I did review last time). I'm glad to be doing it this way as obviously four in one go would have asked a lot of me as a writer & you as a reader but also because ‘Sky Blue Pink' deserves to stand alone in the spotlight.

As with his other work under the "Daffod'i'll" banner, this album is totally idiosyncratic for the reasons outlined in my other reviews. Stylistic comparisons may well be made (I know I do this in trying to describe the songs to you) but really they defy rational comparisons.

It's all here again: humour, spirituality, word play, humanity, massed & varying voices and a general danceability. The only regular feature not present is a bit of dub.

I thought opener  "MASS , Everything OK" is one of the strongest lead tracks in this series of records: poppy, catchy & caring in its lyrics with the vocal overlaying present but not as overwhelming as can be the case on some of Dill's other arrangements: definitely one of the most commercial of his songs.

"Jump" which follows it is again fairly uncluttered & its spiritual message is set against a pleasing backing with both rock & dance elements.  On the other hand, "1 2wo 3hree 4our" is somewhat denser in sound with words tripping over each other playfully over a more synthetic beat: the former might be enjoyed for meaning but the latter leaves a more impressionistic imprint.

"Flowers" is a good example of why I believe this to be one of Dill's strongest albums as it's one of his best solo tracks. A prowling exotic song (it reminded me slightly of Fleetwood Mac's "Tusk") again it benefits from a clear central vocal & is embellished attractively with interesting instrumental passages.

"Work" is another strong & distinctive song: funk based with another good & clear vocal. A good example of Dill's enduring interest in dance musical forms. Next up is "Small , Tall , All." which to my ears forms something of a trilogy with "Love Is.." which appeared on this album's predecessor ‘Purrrfection' and "Love Is All" on its successor  ‘Pink Blue Sky', being meditations on the nature & scope of love.

"Love Ever After" is a gentle further set of similar thoughts leading into a very distinctive Dillsong namely "Scotland The Rave" wherein we get a whole host of his characteristic tropes: punning lyrics set over a very retro synth sound & heavily treated vocals. That however is more than matched for originality by the following song "Who Ray?" (yes it's a pun) which can best be described as what might have happened had Giorgio Moroder decided to set "What Shall We Do With A Drunken Sailor" to one of his trademark electro disco beats. Words alone can't do justice to this example of Dill's commitment to humour in music.

"Stick Your Head Where The Sun Don't Shine" on the face of it sounds very unlike Dill whose philosophy is usually wholly positive: but don't worry: it's not an insult as much as his reflections on people who bury their heads in life's sand.

"AKA Pop" is another piece of evidence for why I think this is perhaps his best record: something of an echo of his pop sensibilities of his early career, again, it's one of his strongest individual songs.

Album closer "Hey Wedding Day" follows the precedent of earlier albums in setting religious texts partially or wholly to music: in this case a verse from Genesis leads off a gentle song about marriage.

As I said, "Sky Blue Pink" deserved a review to itself & I'm glad it has ended up having one.

Today sees chapter 34 in Daffod'i'll's solo album series with the release of ‘SAY AHHH!' with its tracks being "Conquer All", ...
[1 image] END_OF_DOCUMENT_TOKEN_TO_BE_REPLACED

Eight days after my last Daffod'i'll review, here he is back with another album (just the one this time, although he apparently has another ...
[1 image] END_OF_DOCUMENT_TOKEN_TO_BE_REPLACED

In the four days since I reported on the release of the  last four Daffod'i'll albums, he's back with yet another four today.
[4 images] END_OF_DOCUMENT_TOKEN_TO_BE_REPLACED

After releasing three more albums about as many weeks ago, Daffod'i'll  is back with three more plus another compilation ('The Best ...
[4 images] END_OF_DOCUMENT_TOKEN_TO_BE_REPLACED

After last week's release of no fewer than four new albums, this week Daffod'i'll is back with just one album: his twenty third, ...
[1 image] END_OF_DOCUMENT_TOKEN_TO_BE_REPLACED