'All Pretty Real' by The Old Number 7 Band


'All Pretty Real' by The Old Number 7 Band 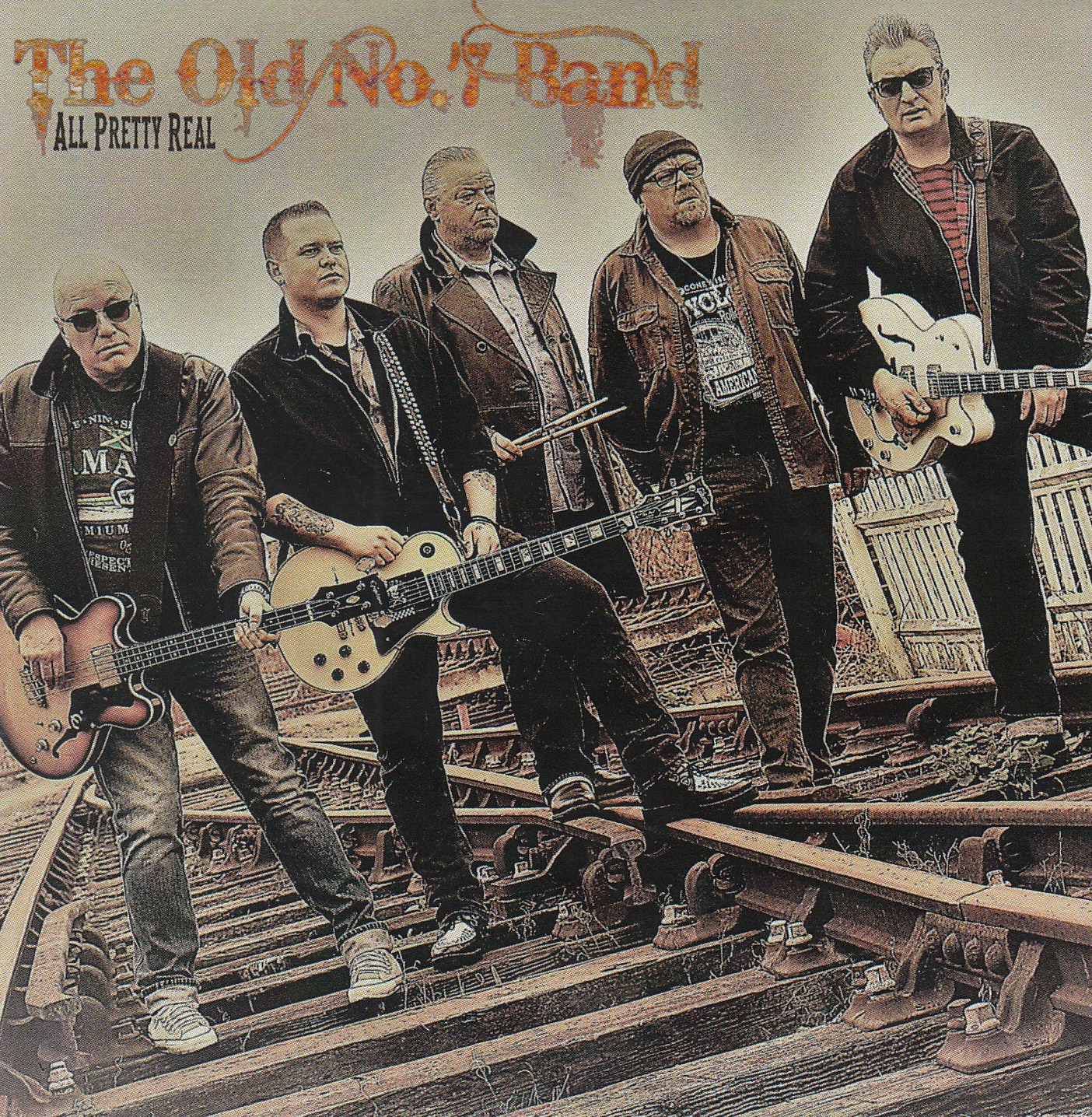 When I saw the Old Number 7 Band at the Railway Inn in Leamington on Saturday, while they were not playing, the venue piped music was some of the best too (it was a jukebox so credit both to the selections on it & the people feeding it). At one point, "Safe European Home" filled the pub & I mentioned to someone that you don't hear that on jukeboxes often.

It reminded me of the adrenaline rush I got/get from putting on albums like "Give ‘Em Enough Rope" & again I don't experience that enough these days. As I'm now going into my review (belatedly: sorry) of TON7B's ‘All Pretty Real' album, I expect you can guess that I felt such a buzz with it.

Bearing in mind how much I like the band and their writing & how often I've been playing "Indiana Jane" in particular on a driving mixtape, I have no reasonable explanation at taking so long, so I'll apologise & get on with it.

Exciting performances, great songs . What more could you ask for?

As noted in the live review of two days ago, the band (Ritchie Hunt-King  on vocals, Sam Smith on lead guitar/double bass, Rob Nixon  on drums, Tim Healey on bass and Sean Pearce on rhythm guitar) bring so much to the party. They can play superbly but what elevates them above even the super-competent is attitude: an obvious love of & enjoyment in what they do and more than a fair share of what Don Letts calls "punk attitude" which is all about what you do & how you do it rather than just three chords & a covering of safety pins & Mohicans.

There are two excellent covers on the album, namely "Boxcars" by Joe Ely (a country artist who collaborated with The Clash)  & Matumbi's "(Can't Get Enough of That) Reggae Stuff", so you have a glimpse of their range & influence already before hearing their originals. Though both are played through garage punk filters, it is remarkable that the latter is actually more dubby than the original version....

As I said in my previous review, this band build up from the solid foundation of a perfect rhythm section, but both Tim & Rob provide much more than just a solid beat. Both elements are important parts of the arrangements & sinuous grooves & patterns ensure that songs have five equally contributing parts: and that's counting vocals as one: in reality the interplay of the voices & vocal parts is another key element. The one thing which probably distinguishes the recorded versions from the live is that you can hear the subtleties & little moments of wonder more clearly without the overwhelming effect of the performance blending them as much, though the mix on Saturday actually separated the parts out pretty effectively..

The album kicks off with an immediate impact with "You Come Along": totally infectious: this is just damned great songwriting & if this doesn't hook you to the band then you have a heart of stone & don't deserve people writing music for you. It's actually quite a poppy track, albeit that weird twisted sort of thing that US garage bands did in the ‘Nuggets' era: trying to write pop songs and coming up with melodic yet grungy classics.

"The Day After" is just as catchy if not even more so: I lost count of the styles going on here: a sort of hybrid creation from the country end of rockabilly?? One minute it sounded like Buddy Holly might have sung it & then it might have been on an early Undertones album...

"Reason" again has so much going on in another deceptively simple song.... a bit "harder" in edge than its predecessors, the guitars snarl for the first time on the album & riffs which sit in some strange territory somewhere between rockabilly & the ones Paul Weller wrote for later period Jam (in fact the bassline also was redolent of that era).

"XVIII" ups the sonic stakes yet further  & now we are into serious psychobilly.  The pop sensibility now has become sinister vocalisations, with screaming alternating with menacing...... These guys don't just know how to write totally unique songs in various styles but how to sequence an album.

And that is another general point of interest: few if any songs actually fit neatly into a single genre template but draw variously from their presumed interests & enthusiasms to create new artefacts of their own imagination & creation. All of which reek of integrity.

"Indiana Jane" as previously mentioned might have been on any list of earworms of last year if I could bring myself to put things into arbitrary order (sorry I can't) and it still sounds as fresh today to me. If you want to get people into your song then catch them at the top with a top class riff & this certainly does (the band offer us riffs of the highest class throughout & the lyrics match them for ear catching power)..... I suppose you might call this a ska sound which certainly doesn't hinder the fact that it is almost impossible to prevent oneself dancing to it (be careful when playing in the car), but in reality given the guitar stylings it is probably the nearest thing to a Skabilly song outside the work of that genre's creator Roddy "Radiation" Byers and probably owes a lot to the close connection between TON7B and the Skabilly Rebels including shared membership. This song should be a hit single. But then the same could be said of others on here.

I loved "Interlude" as it confounded all expectations: what a stroke of genius & demonstration of humour to insert a track like this half way through the album after such high octane preceding tracks: a largely acoustic number (with double bass) of a form of skiffle with absolutely minimal lyrics (one word or possibly two repeated), it allows us to catch our breath & again emphasises their versatility & breadth of interest.

"Pigtail" reintroduces electric instruments and is the first real all out rock track: the pedal is trodden on good & hard here and the stakes raised again after the intermission. Back to beers after the ice cream.

Next up, "Hunny Blue" positively struts its considerable stuff in a manner not unreminiscent of Dr Feelgood, complete with another shot of menace which certainly reflects that band's inability to write even the tenderest song without such a quality. "she shakes like jelly & she tastes like honey" indeed. Prison or hospital seem to be the only options for her lover(s).

The final original number, "St Catherines", ironically (or perhaps not) shows that if Dr Feelgood couldn't write a tender song sans menace, TON7B certainly can... Sounding like absolutely nothing else on the record, it showcases yet another of their remarkable array of facets but yet like pretty much all the others, also demonstrates their taste & skill in not playing as much as playing. Throughout the album there is excellent use of space & drop out & if it's most noticeable on this track, it certainly isn't restricted to it.

Sometimes when faced with an album this damn good, people (me included I suspect) trot out the "all killer no filler" line: maybe it's overused but it certainly applies here. The bottom line? I didn't just appreciate this album I genuinely enjoyed every bar of it & it got my pulse racing. This is a truly skilled band but better than that they possess imagination, taste & above all a joy in music making. I hope you'll enjoy it as much as I did. Which is to say "hugely".

The Old Number 7 Band at the Railway Inn

What a great way to start off 2020.
[5 images] END_OF_DOCUMENT_TOKEN_TO_BE_REPLACED