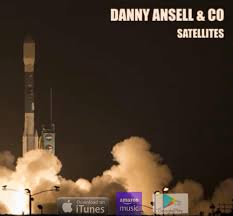 ‘Satellites'   is the most recent single by Danny Ansell & Co (Danny Ansell on vocals and guitars, Roger Greasby on drums and Patrick Beard on bass guitar), was produced by Roger at ‘Born in a Barn' studios in Ansty and is a taster for their album due out in March.

A typically passionate song & one which makes its mark instantly upon your consciousness & memory, like other skilled & tasteful writers, Danny does a couple of things so well here that in enjoying the song you don't consciously notice them. One is that the lyrics are actually quite complex in terms of the ideas he is trying to get across. Yes the imagery of satellites & the metaphor of love etc being an elevated emotion are both in there, but the point is not laboured: it just drifts into the song every so often like an orbiting body circling the earth regularly. Otherwise the song tackles all sorts of things from romantic love to more general interpersonal relationships & ways of living your life.

Similarly, the music is deceptively simple which sharpens its impact. The instrumental licks are introduced with subtlety & enhance rather than distract from the core song. And this in a nutshell is what I find so appealing about Danny. Yes, like the rest of you I respond very favourably to his powerful live performances: his songs always work up a storm & that's why he is deservedly a "go to" choice for promoters, especially of festivals (where he is a great headliner) and a perennial favourite of audiences. On the other hand, listening to the songs at home reveals both the subtleties of performance & of composition: he is experience enough to do this & sensitive enough to be as interested in exploring his interior life & thoughts as well as whipping up a live storm.

You can't cut it live & you can't produce subtlety on record without having high quality collaborators & Danny always finds these. However, although I named the "& Co" earlier, to me the single is as much about who isn't on it as who is. Throughout listening to it, I was constantly thinking of Stephen Madden, so long part of Danny's band quite apart from his own work & who you'd expect to be on this record. This is my first review of Danny since Stephen's passing & the last time I saw either of them live, they were playing together last summer. Hence I'd like to take the opportunity of this review to salute a man who is not playing on it physically but probably is in inspiration & spirit.

The first Danny Ansell release of 2022 has been revealed as "Jericho", which follows December's "Wishing Well".
[2 images] END_OF_DOCUMENT_TOKEN_TO_BE_REPLACED

It's a great & somewhat rare privilege to give you as much notice as I am here with Danny Ansell's next release "Wishing Well" as it ...
[1 image] END_OF_DOCUMENT_TOKEN_TO_BE_REPLACED

The most recent occasion on which we reported on Danny Ansell and his music was back in April, with the release of his "Slice of Cake" single.
[1 image] END_OF_DOCUMENT_TOKEN_TO_BE_REPLACED

Despite his skill at honing crowd pleasing anthems, the reality of Danny Ansell's songwriting is the subject matter he covers is actually very ...
[1 image] END_OF_DOCUMENT_TOKEN_TO_BE_REPLACED

One of my personal sadnesses (among several) for our local music scene was  that Danny Ansell's long awaited ‘As It Goes'  album came ...
[3 images] END_OF_DOCUMENT_TOKEN_TO_BE_REPLACED

I've said it before, but I'll say it again, I especially enjoy (and enjoy writing about) music where it touches base with other art media.
[1 image] END_OF_DOCUMENT_TOKEN_TO_BE_REPLACED