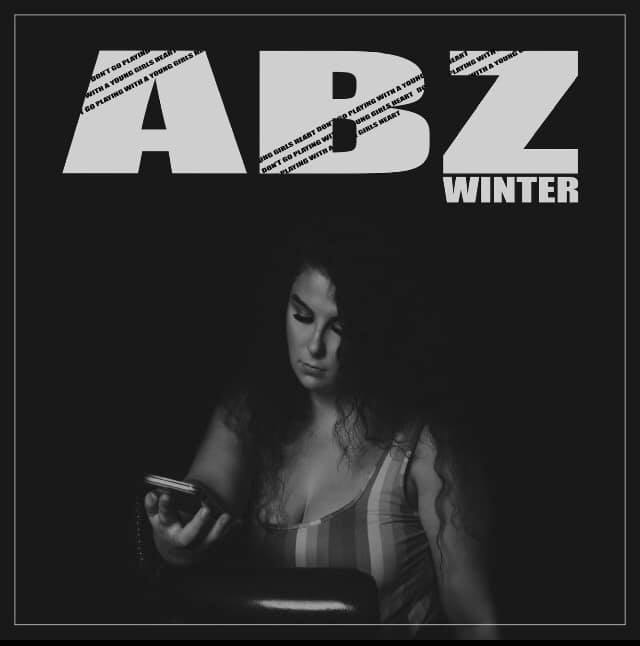 Back when The Clash began, their manager, Bernie Rhodes, instructed them to "write about what you know", advice which took them along the route we now all know too.It's good advice: however well crafted a song may be, if it is simply an exercise in creating a generic piece with no emotional truth, somehow we instinctively sense it. I know I much prefer material I feel has such integrity & try to focus on it in my reviews.I don't know whether Abz Winter has consciously adopted such a course or whether she herself works on instinct, but I do like how she is on such an upwards trajectory with her writing by focusing on what she knows.Certainly I was hugely impressed at how at sixteen she could create something as true as "Incompatible Me" and now at seventeen she is releasing  "Don't Go Playing With A Young Girl's Heart" (on 6th February to be precise)In fact if you read my review of 14th December you'll be aware that her last single was actually the Christmas orientated "It's That Time Of Year", but I feel that it is the earlier "Incompatible Me" that the new song truly follows up, both being in the same personal style & each saying things in Abz's own authentic voice.

Frankly I think you will be stunned by the latest single. I felt that "Incompatible Me", which was a really effective dance orientated song (I have to be a bit careful at describing the musical sound: I felt it was a fresh contemporary one & that it was really appropriate for her: however Abz had, she says, crafted it with a ‘retro feel' in mind..... of course is "retro" to a sixteen year old is rather different from my perspective).  "Don't Go Playing With A Young Girl's Heart" sounds absolutely nothing like its predecessor at all. I admit I have high regard for Abz & her creativity & capacity to develop extremely quickly, but even I was blindsided by this beautiful stripped back jazz orientated tune.  Which is wonderful: as a reviewer & music lover I enjoy & appreciate being surprised: the last thing I want is "more of the same".

I suppose in hindsight this is compatible with what audiences experience with Abz: just her marvellous voice & an acoustic guitar (played originally by Ian Bourne & latterly by Will Ball): however I honestly wasn't expecting such a stylistic leap so soon in her career.

I think I had better be a little cautious with too many details at this stage: after all this is a preview & I have had the privilege of hearing the song three weeks before you can I'm afraid: I don't want to spoil the surprises & believe me I think you'll be surprised & delighted.

Lyrically we are back where I began: Abz writes & sings from her heart & consequently the words hit home as emotional true. She has a tremendous voice but what I love about her approach is that although she does things with it on this new track which I haven't previously heard her do (she clearly works as hard on her vocal technique as she does on everything else), there are none of those irritating tricks & pretensions some singers of this type of material use to show off (or cover up technical deficiencies): the singing is as truthful as what is being sung.

Abz had a cracking 2019 with a huge & growing amount of critical & popular acclaim, culminating in radio play, very prestigious gigs etc, and deservedly so. However if this song indicates what 2020 is going to be like, it will surely eclipse last year. And deservedly so again.

Out this morning, as a fanfare-free surprise for her fans, is a new EP from the irrepressible Abz Winter entitled ‘Just Wanna Be Me'.
[1 image] END_OF_DOCUMENT_TOKEN_TO_BE_REPLACED

As I'm sure most if not all of you are aware, Abz Winter was selected for the new television talent show "Walk The Line" at the end of 2021 and ...
[1 image] END_OF_DOCUMENT_TOKEN_TO_BE_REPLACED

That irrepressible artist Abz Winter is back on 8th October with her latest single "Under Me", her follow-up to "Money" from July.
[2 images] END_OF_DOCUMENT_TOKEN_TO_BE_REPLACED

As her follow up to the popular "B.
[1 image] END_OF_DOCUMENT_TOKEN_TO_BE_REPLACED

Abz Winter has only gone and done it again hasn't she? I love the way that although her game has never needed raising (it's been at the top ...
[2 images] END_OF_DOCUMENT_TOKEN_TO_BE_REPLACED

It's actually been a year since we shared the news about "Jump" by Abz Winter with you, a period of time between releases which would have ...
[1 image] END_OF_DOCUMENT_TOKEN_TO_BE_REPLACED