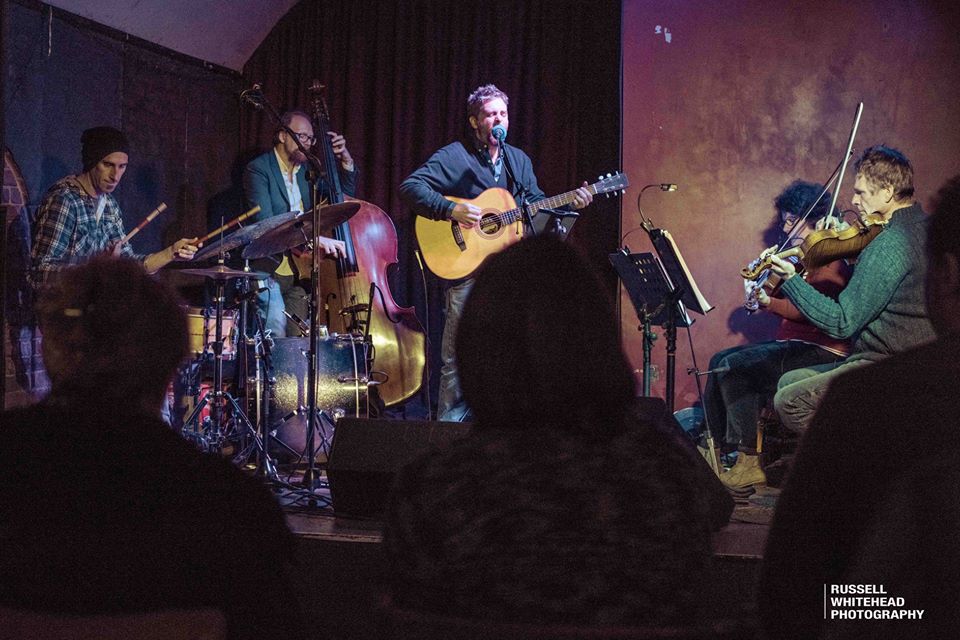 One of the final formal gigs I shall attend in 2019 was also one of the best: the highest possible levels of musicianship but even more importantly played with love for the music & where performers & audience were locked into a symbiotic embrace by it.

From the first notes of Ellie's a cappella rendition of Mimi & Richard Farina's "Falcon" to the final ones of an unplugged version of "Sigh No More Ladies" by Wes Finch & John Parker which respectively opened & closed the evening at the Tin, we were transfixed by the beauty & truth of what we were hearing, made particularly effective by the marvellous acoustics & superb sound picture.

I make no apologies for reviewing either act yet again & once more urge you to catch them live: however great their recordings are (and they are), they reach yet new heights live: and both feature very significant songs in their repertoire which have yet to be recorded.

What a year for Ellie: having graduated with a First on her music degree, her name & reputation are soaring. I can't thank her enough for contributing to "Hot Music Live Presents Volume Two" where her "Against The Tide" is gaining multiple compliments. From her opening with "Falcon" (she seems to like a cappella songs about birds as she often opens, without fanfare, with her own "Robin") through magnificent compositions like "Against the Tide" and two you must look out for when she releases them, the unbelievably poignant "For a While" and the zeitgeisty "Sky is On Fire", her beautiful rendition of Richard Thompson's "Beeswing", in the words of Russell Whitehead (who has seen a few gigs in his time),"(her )....voice had everyone in reverie"

Check out all things Ellie at:

Headliners the Mechanicals (and let's not fail to mention band members Katrin Gilbert, Ben Haines & Jools Street as well as John & Wes) were back at the site of their triumphant performance of "The Righteous Jazz" on November & appropriately opened with a selection of pieces from it (more songs not yet released: I hope they will be soon) before moving onto their released albums with songs from the largely Shakespearean ‘Exit, Pursued by Bear' (which I believe has now sold out of hard copies) and then the most recent, ‘Miscellany #1'. The encore (in a rather Nizlopi type move) was, as mentioned, Wes & John unplugging, deserting the stage & playing the hit from "Much Ado About Nothing' among the audience,  with a waltz around each other to boot.

They also had a brand new limited edition cartoon of themselves as merchandise which I think I ought to bring to your attention.

Will 2020 be able to match or top nights like this? It'll be great seeing it try.

We cover some excellent artists in the magazine who produce some great material.
[1 image] END_OF_DOCUMENT_TOKEN_TO_BE_REPLACED

Occasionally I've been able to review for "Hot Music Live" an event which involves but is not limited to music: a particular pleasure.
[7 images] END_OF_DOCUMENT_TOKEN_TO_BE_REPLACED

Well here I am again, this time reviewing not one but two artists on whom I fear I may have already used up my supply of appropriate superlatives in ...
[3 images] END_OF_DOCUMENT_TOKEN_TO_BE_REPLACED

Congratulations: you are about to get a double review.
[6 images] END_OF_DOCUMENT_TOKEN_TO_BE_REPLACED

It's great to preview the 2019 SHOOT Festival which offers "a platform for Coventry & Warwickshire's emerging artists to shoot from".
[1 image] END_OF_DOCUMENT_TOKEN_TO_BE_REPLACED

As I've got out more in recent weeks to see live music again, I've been most fortunate to catch some artists whose reputations were made in ...
[9 images] END_OF_DOCUMENT_TOKEN_TO_BE_REPLACED

As anticipated in my interview with Bid last month, yesterday evening saw a magnificent gig at the Tin with the Monochrome Set being supported by The ...
[6 images] END_OF_DOCUMENT_TOKEN_TO_BE_REPLACED