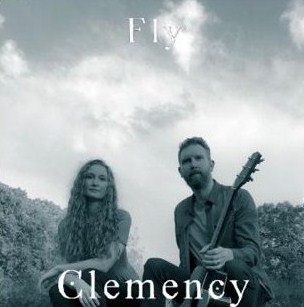 If several of my more recent reviews have been of songs previously unheard by me & some even caught me by surprise with their release, the new single "Fly" by Clemency (out today) has long been on my radar  & I have awaited its release patiently for long months, having delighted in hearing it played live. In fact I remarked on how great I found in back in March in a live review for this magazine: clearly the audience on that occasion agreed with me (and presumably have also been counting the days to the release) as they demanded it being played twice.

And in the song itself, they certainly do fly.... Nina Bailey's voice soars heavenwards as few others can in this lyrically uplifting song, driven on its trajectory by Ben Clempson's sprightly playing. It is dangerous to predict success on a wider scale than people are enjoying at any given time (luck seems to play too big a role), yet all the right ingredients are here: the quality of the composition & performance are flawless, the end product being a song which works on every level to please those from the aficionados to those who simply respond instinctively to a piece which raises the spirit & is so deceptively simple that we can retain the words & tune in our heads to replay when we need inspiration. I certainly do wish them well with the song reaching the widest possible audience.

Nina  (vocals & cajon) & Ben (guitar & vocals) only created Clemency in  2017 yet since then have delighted us with their debut single "Man at the Station" (reviewed last August)  and kindly allowed us to use "Pillar to Post" on ‘Hot Music Live Presents Volume One' last year. I can't wait for a full album of their original material given what they have been playing at their always full & mesmerising gigs.

There is a splendid video to accompany "Fly"  and like that for its predecessor, is clearly shot with love & high production values & shares too with the earlier one an almost sepia tone, evoking possible a 1930s feel, appropriate I guess for a roots act but also reflecting the timelessness of the song itself. Check it out at https://www.youtube.com/watch?v=UeNv43GlxFk

Sadly it's been a couple of years since I was last able to post an article on the splendid Clemency (it was their February 2020 gig at ...
[4 images] END_OF_DOCUMENT_TOKEN_TO_BE_REPLACED

I expect we all agree that music can actually do things to us & for us: improve our mood & morale, lift our spirits, transform our psyches.
[2 images] END_OF_DOCUMENT_TOKEN_TO_BE_REPLACED

As I was sitting watching Clemency last evening at the Magic Lantern, the thought which went through my head was ‘how lucky I am' to be there ...
[1 image] END_OF_DOCUMENT_TOKEN_TO_BE_REPLACED

I find myself drifting into describing gigs at the Magic Lantern as "magical": unfortunately the label is accurate.
[3 images] END_OF_DOCUMENT_TOKEN_TO_BE_REPLACED