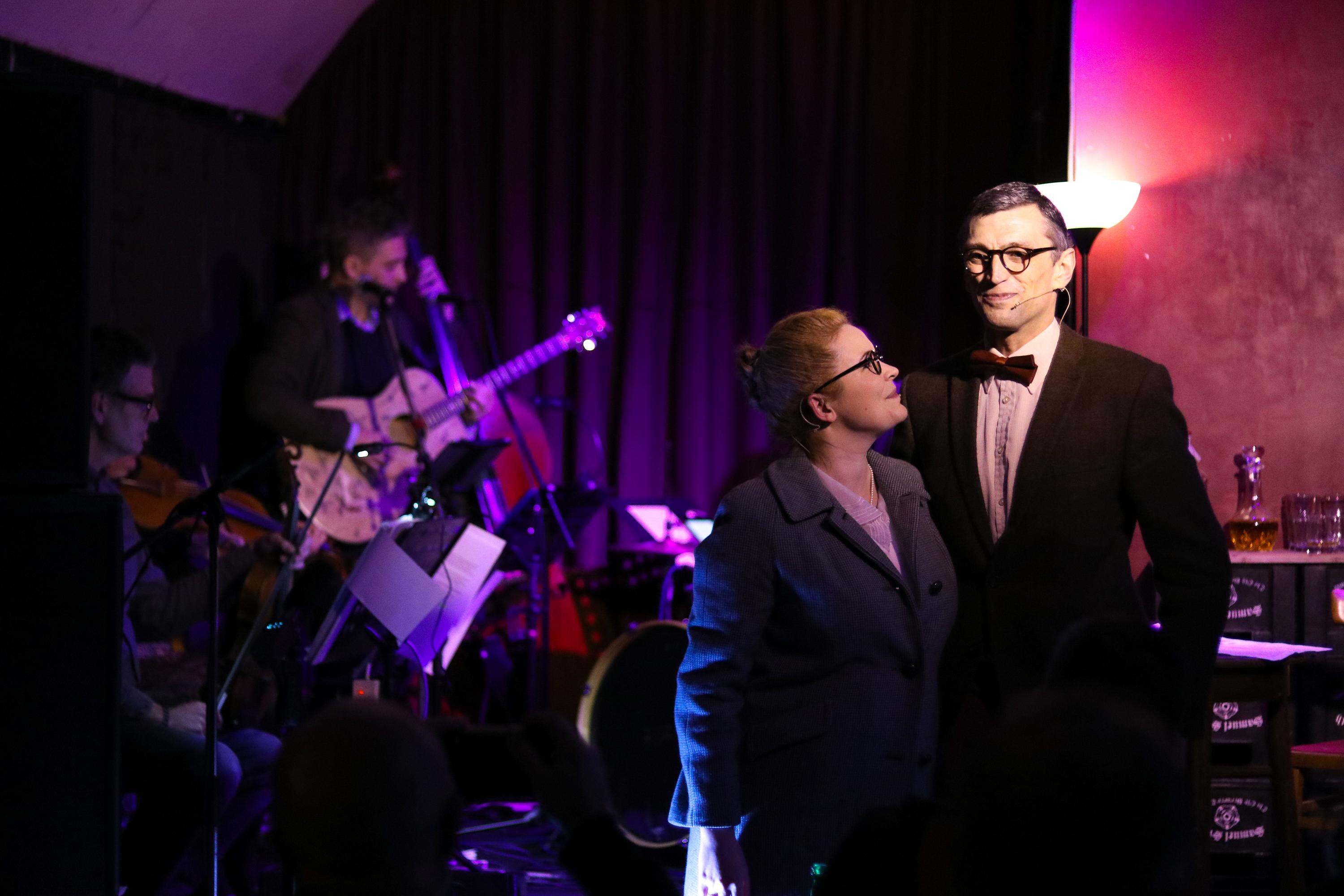 Occasionally I've been able to review for "Hot Music Live" an event which involves but is not limited to music: a particular pleasure. Today is one of those occasions & involves a set of artists whose vision is to stretch outside music & embrace other art forms: namely the Mechanicals Band.  Last evening I & a full house joined them at the Tin for what they describe as a "hybrid show" which is focused upon the life & work of Coventry born & educated Philip Larkin, one of the major twentieth century British poets: indeed a man who was offered & declined the Poet Laureateship.

The show, commissioned by the Shoot Festival, has already had one performance at the Hull Truck  Theatre on the 2nd of this month (Larkin was the University Librarian in Hull) and several of the original settings of his poems have been performed in concert by the band in recent months: "Long Lion Days" in particular is already an audience favourite & was demanded as an encore last night.

However the several poetic settings were greatly added to in the show with a glorious mixture of original jazz instrumentals & instrumental versions of largely pre-war standards (I imagined many being sung by the likes of Al Bowlly).

The band as is their wont, have been working tremendously hard (among many other professional commitments for Wes Finch (vocals & guitar), John Parker (double bass), Ben Haines (drums & percussion), Katrin Gilbert (viola) and Jools Street (violin)) and it has long been my desire to witness the end product.

Rather than just playing, the band were involved in dialogue too, each reciting the letters to & from Larkin which formed the spine of the show (augmented by what sounded like excerpts from his ‘Desert Island Disks') with Wes taking the role of Kingsley Amis and as such deservedly getting his face slapped by Monica for rude comments about her in a letter to Larkin.

Other detailed delights were a rare vocal performance (on a blues) by John and a loud drum retort by Ben to Larkin's querying of drums actually being an instrument.

The imposition of dialogue over music offered a tough technical challenge & the show did not shy away either from the less comfortable aspects of jazz lover Larkin's personality (and of course that of Amis): misogyny, racism & ultimately his behaviour towards Monica who emerges as the sympathetic figure. It is interesting that another of his love interests Maeve Brennan is represented  in the show at best as an empty chair & an absence.

The climax of the play & its most poignant moment for me was when Monica sadly shredded his letters towards the end.

Musically the night was exactly as you'd expect from such virtuosi, with obvious show stoppers like "Long Lion Days", "The Horns of the Morning" or their setting of "This Be the Verse" whose notorious opening provided a nod back to their previous "Rude" title: as indeed did a lot of dialogue given the frankness of the characters concerned. Other pieces such "High Windows" have become known to fans via social media, but tonight was the first time we'd heard them live.

This is a most commendable, enjoyable & rewarding  piece on so many levels, certainly musical & theatrical & also offering glimpses of a local figure of stature but without being a wholly commendable role model. What is wrong with subtlety, finesse & ambiguity in art after all? The packed & enthusiastic Tin crowd certainly appreciated it & as noted demanded more. Let's hope this show, into which so much has been put, will not be limited to just two performances.

We cover some excellent artists in the magazine who produce some great material.
[1 image] END_OF_DOCUMENT_TOKEN_TO_BE_REPLACED

One of the final formal gigs I shall attend in 2019 was also one of the best: the highest possible levels of musicianship but even more importantly ...
[2 images] END_OF_DOCUMENT_TOKEN_TO_BE_REPLACED

Well here I am again, this time reviewing not one but two artists on whom I fear I may have already used up my supply of appropriate superlatives in ...
[3 images] END_OF_DOCUMENT_TOKEN_TO_BE_REPLACED

Congratulations: you are about to get a double review.
[6 images] END_OF_DOCUMENT_TOKEN_TO_BE_REPLACED

It's great to preview the 2019 SHOOT Festival which offers "a platform for Coventry & Warwickshire's emerging artists to shoot from".
[1 image] END_OF_DOCUMENT_TOKEN_TO_BE_REPLACED

As I've got out more in recent weeks to see live music again, I've been most fortunate to catch some artists whose reputations were made in ...
[9 images] END_OF_DOCUMENT_TOKEN_TO_BE_REPLACED

As anticipated in my interview with Bid last month, yesterday evening saw a magnificent gig at the Tin with the Monochrome Set being supported by The ...
[6 images] END_OF_DOCUMENT_TOKEN_TO_BE_REPLACED