"Let This One Be Mine" by Izzie Derry 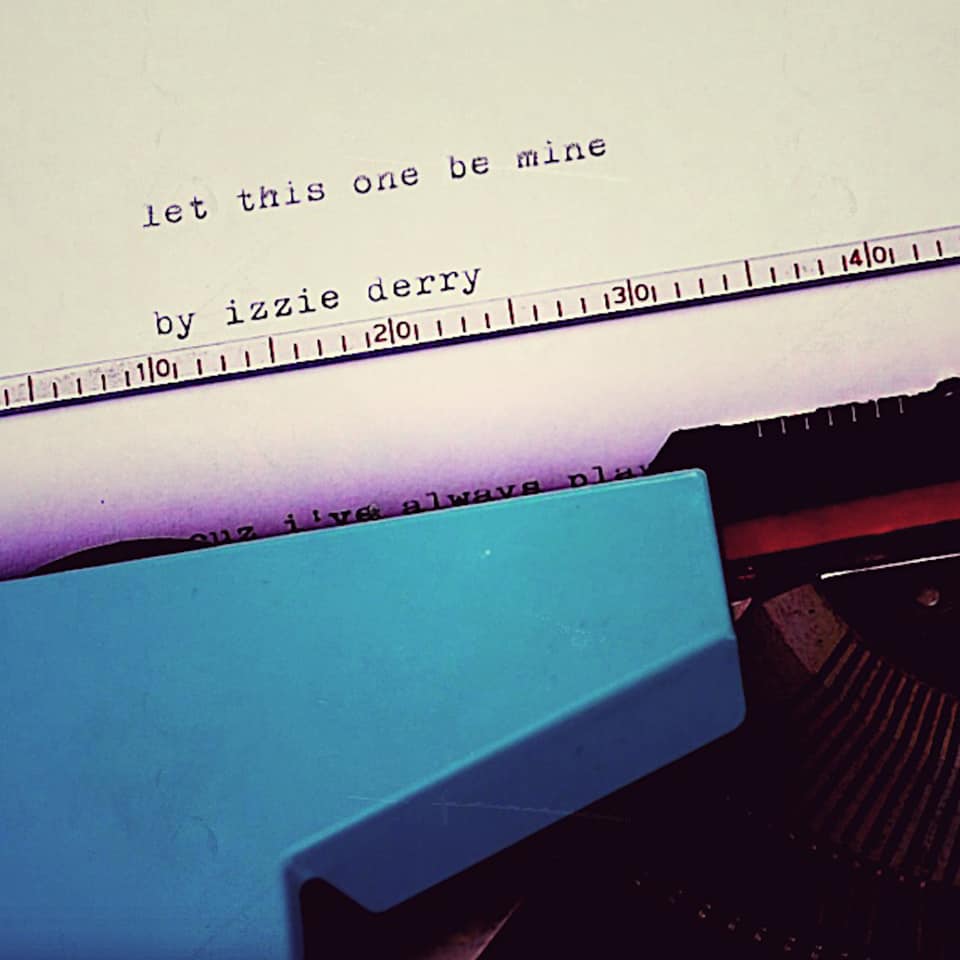 I find myself here writing a review which I had never anticipated. I kidded myself that I had a reasonable understanding of an artist whom I had previously reviewed  but here I am writing about a facet of Izzie Derry not mentioned in earlier articles: not that I'm complaining as I like being surprised by artists & I enjoy finding yet more new depths to their craft & artistry.

One of the themes of my recent reviews has been my admiration for the quantity & quality of her latest  work, not least that featured on her ‘Lost At Sea' EP, feeling that her arc as an artist is clearly on a steep upwards gradient.

Yet Izzie's latest single release is "Let This One Be Mine", a track you can find on her debut album "Goodbye" (from 2017) & which is thus more indicative of her solo performances of that era than the more complex band arrangements anyone attending her live shows is currently more likely to encounter.

The answer is of course that this is a re-recording with a full band, undertaken because she felt that the original production did not do full credit to the song & this tells one much about her perfectionism & commitment to her own material. My first thought actually was of John Lennon who always nursed ambitions to rerecord such classics as "Help!" or "Strawberry Fields Forever" in order to produce recorded versions which matched the sounds in his head, regardless of the popularity & acclaim of the ones released.... I sense something similar going on here.

On this new recording, Izzie works with bassmaster Jake Morris (who also mixed & mastered it), keyboardist/backing vocalist Herbie Walker, guitarist Dominic Pulleyn, drummer Hannah Websdale & violinist Gabija KaisiliauskaitÄ—: the first two of whom will be very familiar to those who have caught Izzie Derry Band gigs over the past couple of years.

So what of the new recording & how does it compare with the original? Well if Izzie liked the song sufficiently to revisit it in this way, it would seem plausible that many aspects should remain as she wrote it. This understandably applies to the lyrics & the overall sentiment but extends even to the acoustic guitar introduction & even the length of both versions is identical to the very second. Izzie is applying the "if it ain't broke..." principle and what we have instead are subtle enhancements informed by her musical progress in the intervening years, her changes in perception & perspective informing her vocal performance & of course the individualities of the new players. If the earlier recording has a more "folk" intonation, this one leans more towards "jazz" with a looser more mellow groove (I have to say that the almost military snare drum so prominent on the "Goodbye" cut simply sounds inappropriate once you've heard the new arrangement) and Izzie's experiences in singing have produced a vocalisation which sounds both more playful & contemplative at once. If previously the emotions were expressed wistfully, today we have full on yearning with a greater level of intensity. You certainly feel her angst & if you are not moved by it then you must have a heart made of stone. The arrangement with all its many elegant extra elements builds effectively but is so well produced that her voice & the signature guitar part remain central to your listening & the subtle players complement the song ideally.

This is a strong song & it certainly is presented now in a form both consistent with Izzie's ‘Lost At Sea' material & possibly more in a way to get a broader range of media attention.

Don't just take my word for it: I don't usually quote others in my reviews but I was discussing the song while writing this with Paul Newbold of Lightspark Music Photography (who has long been following her career) and his response to me was "I don't know how she's done it but she's made a superb song even better"

You can find a video of this single on YouTube at https://www.youtube.com/watch?v=QIWo-yg5c44

Last evening at Earlsdon Carnegie Community Library saw the "Hush! A Summer Celebration" event, another in the series of collaborations between the ...
[8 images] END_OF_DOCUMENT_TOKEN_TO_BE_REPLACED

I do like being taken be surprised by music (to be honest I'm not sure I enjoy reviewing music which fails in some way to do so) and I hope I am ...
[1 image] END_OF_DOCUMENT_TOKEN_TO_BE_REPLACED

If you are anything like me, among the myriad challenges to our communities currently being presented, the probable curtailment of live music for ...
[4 images] END_OF_DOCUMENT_TOKEN_TO_BE_REPLACED

One conundrum I face with reviewing the calibre of artist I tend to focus on (it's an enjoyable challenge really) is how to handle it when ...
[1 image] END_OF_DOCUMENT_TOKEN_TO_BE_REPLACED

It's odd: the more reviews you write, the more patterns emerge.
[1 image] END_OF_DOCUMENT_TOKEN_TO_BE_REPLACED

December 12th is a date many people have possibly been looking forwards to or dreading for various reasons.
[1 image] END_OF_DOCUMENT_TOKEN_TO_BE_REPLACED