"Endless Summer" by The Rising


"Endless Summer" by The Rising 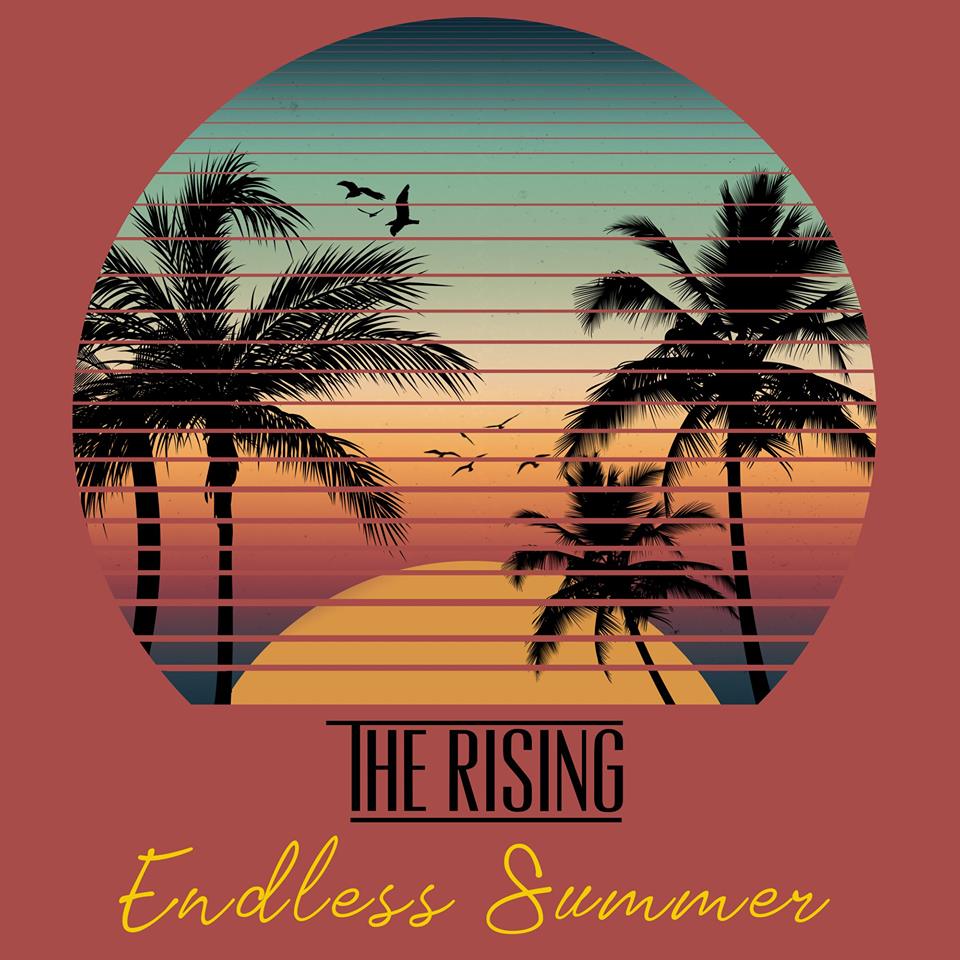 There are a handful of great locally based artists not so much emerging (how can they be just "emerging" when they have spent time honing their craft?) as suddenly breaking out into the consciousness  of much wider audiences: mine too.

Without doubt one of them are The Rising: already covered by this magazine several times in a short space of time so great has their impact been. Selected as Artists of the Month by Coventry & Warwickshire Introducing, featured in that programme's recent Temperance showcase & performers of a very well received set on the BBC Coventry & Warwickshire stage at the Godiva Festival, this is a band making big waves.

I think we can all be excused a little in arriving at the Rising's party only at this point since they are only relatively recently based in Leamington, having previously been so in their native Belfast.

Still, making up for lost time, I am pleased to report on their brand new single "Endless Summer" which will be out on Friday 2nd August and effectively follows up their ‘Moving On' album already reviewed in this magazine.

As noted previously, The Rising perform music of their own composition & styling and I have discussed how difficult it is to pin that down in terms of genre. The new single doesn't make it any easier by pigeonholing itself  either..... I am so grateful to the band for giving me an advance listen but frankly I could sit here until release date trying to do it. They certainly have a deep love of country & to be honest it's in there to some extent..... The sound is very very far from retro country: it owes a great deal to ultra modern R&B pop & like all great summer records is an infectious, catchy earworm with not a hint of the angst of classic country.  This sounds very little like Loretta Lynn. Who it does sound like is Chantelle McAteer. When you hear The Rising live or on record, the first and abiding thing you are going to pick up on is the glory of her voice (and of course she co-wrote the song too with Chris Logan) and not only is this the central axis around which the entire song spins, it should also be noted that she has a voice which is going to be cited very often as one of the best now in our area: a really great addition to the many others we already are fortunate to have.

I suppose when I heard the title I thought immediately of the Beach Boys. Which wasn't very helpful as the only thing it has in common with them is the care with which it was made. Instead of the rather mythological songs of that band (they weren't living the lifestyle they were singing about) nor the out of reach 1960s Californian setting, The Rising's record will strike an immediate chord with its listeners. This is real life: hopeful & buoyant but one they can all identify with as part of their own experience.

Something of a loveletter or postcard to their fans, it wishes them all the best for Summer 2019 and indeed if you go to their page, the promotion seeks to include you by canvassing your own summer memories.

It really ought to get substantial airplay (and the band are certainly on local radio radar) and deserves to do well. Catch them live too: they are great!

You can catch The Rising on August 30th at Temperance in Leamington with another BBC Coventry & Warwickshire Introducing Artist of the Month, Loveday.

When last week I told you of The Rising's collaboration with Tiernán Heffron called "Come Closer", I offered the observation that "this is a ...
[1 image] END_OF_DOCUMENT_TOKEN_TO_BE_REPLACED

I have to confess that when I heard that the new single by The Rising (out today) was to be their version of "Have Yourself a Merry Little ...
[1 image] END_OF_DOCUMENT_TOKEN_TO_BE_REPLACED

If you have been reading my more recent reviews of The Rising, then it will not be news to you that they've been steadily releasing each of the ...
[1 image] END_OF_DOCUMENT_TOKEN_TO_BE_REPLACED

For those of you following the incremental release of The Rising's ‘No Hope Without Love' EP (and I hope that's you all), you may ...
[1 image] END_OF_DOCUMENT_TOKEN_TO_BE_REPLACED

True to their mission, The Rising are back with a new single "Highway to the Lost & Found"  (due out on 3rd September) just over a month after the ...
[1 image] END_OF_DOCUMENT_TOKEN_TO_BE_REPLACED

I hope you have been following the progression of singles released by The Rising from their upcoming ‘No Hope Without Love' EP?  Following ...
[1 image] END_OF_DOCUMENT_TOKEN_TO_BE_REPLACED