Izzie Derry with her special guests King of the Alps 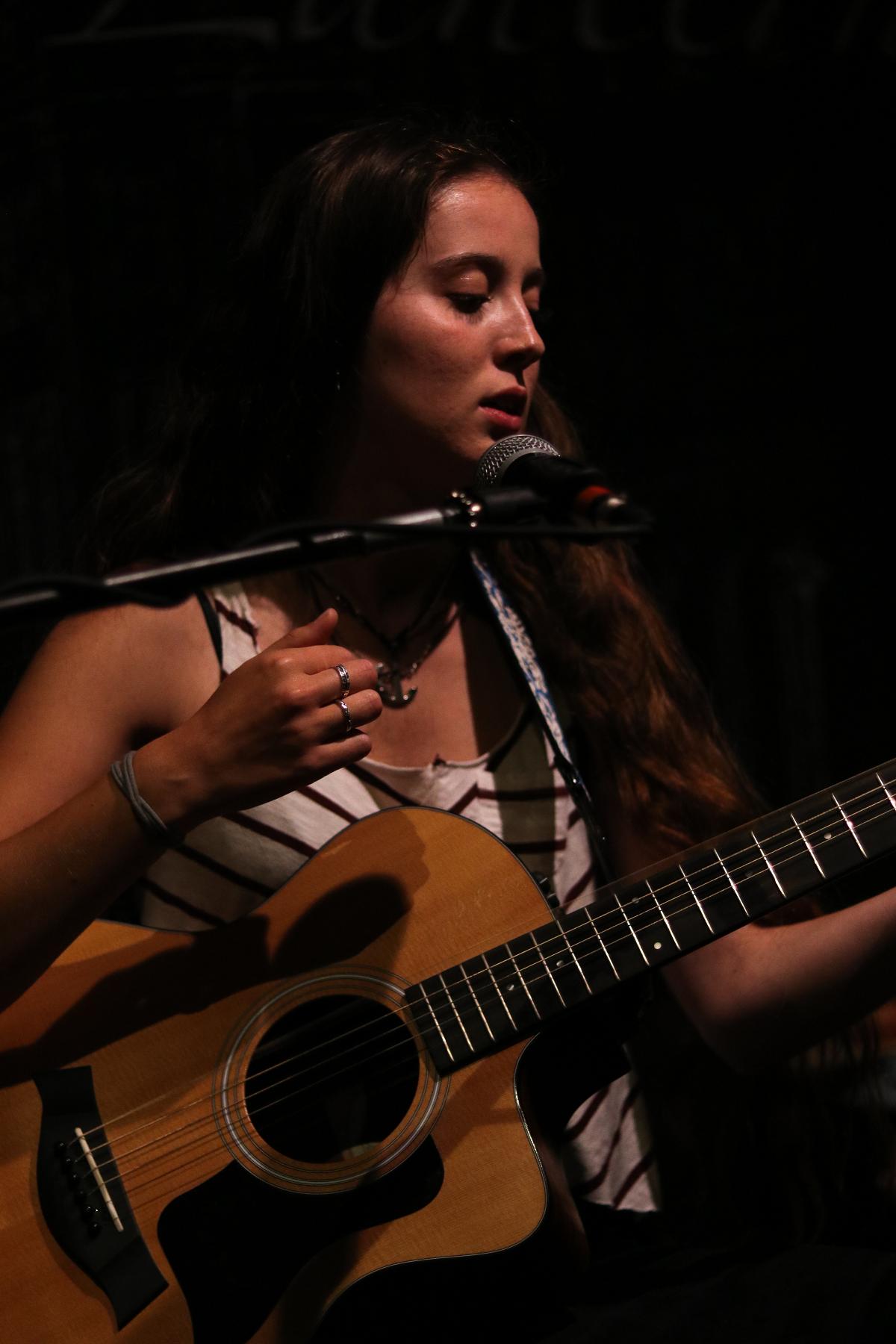 Last night was one for the connoisseurs: a whole evening of nothing but top class original music written from personal perspectives & played with skill & love. No wonder the Magic Lantern had so many local musicians come to see Izzie Derry and her band supported by King of the Alps.... you could barely move for people reviewed in "Hot Music Live"

King of the Alps, Izzie's special guests for the evening, fielded their core lineup of singer/guitarist/writer Paul Ingram & bass player Simon Ward, However Paul was telling me of several most interesting projects the band are working on including recording with Glyn Finch who was in the audience for the evening.  The set therefore was based around tracks from the "Matters of the Heart" album & "Beauty Scarred" EP (both reviewed in this magazine) in necessarily stripped back formats, featuring Paul's passionate guitar & singing and Simon's inventive & fluid basslines. At one point they dipped back to a 1994 track from a previous collaboration and a magical moment came when Izzie joined them for a rendition of the recent "Helter Skelter" single on which she sang. Bearing in mind a King of the Alps live performance is a rare commodity indeed and the opportunities to play with Izzie accordingly more limited, this was one to savour. As indeed the audience, who knew a good thing when they heard it, agreed. I look forwards to more King of the Alps activity on record & stage & shall alert you when I am aware of details. If you prefer, you can check them out yourselves at

I have previously mentioned how strong Izzie's songwriting skills are in so many respects, but one being how well the songs can be  adapted to different settings & arrangements. In the last two months alone I have heard the core of her main current set (based around the recent "Lost At Sea" EP) played solo at Izzie's gig with Fairport Convention at Leamington Parish Church, with her full band at Leamington Peace Festival & with her stripped back band of Herbie Walker (keyboards & backing vocals) and Jake Morris both outside (the Godiva Festival) and inside (tonight). On each occasion the same songs have sounded great but really quite different in style of performance. Understandably they were at their most ethereal & folky on the first occasion, really rocking on the second (if you are a long term Izzie fan, haven't heard the full band & don't believe she can rock: she can: believe me).  You might think that given the same lineup, the latter two performances were similar to each other. I wouldn't necessarily say so. Outside, on a piping hot Sunday afternoon, Izzie, Jake & Herbie grooved, with Izzie standing & moving with the beat. Inside, they were all seated & Izzie took the opportunity (more on this later) to add her trademark two footed percussion. The groove was still there but it was a more intimate one aimed at our hearts when the first aimed at our feet.

On the Godiva afternoon, Izzie had been preceded onstage by Stone Bear whose drummer ,Jeff Dennis,  had improvised a kit including using a suitcase as a kick drum. Impressed, Izzie decided to emulate this, in the week built her own variation & with only one rehearsal debuted it tonight. How anyone can sing, play guitar, play a tambourine with her left foot & ‘kick-suitcase' with her right and sound so good is beyond me.... What a musician. What co-ordination.

While the set included a fair proportion of "Lost At Sea", it also delved into the "Goodbye" album with reworked & evolved arrangements (it is delightful how these "old" songs can develop new nuances and meanings as she explores them with her current collaborators who did not play on the original recordings) & Izzie also unveiled a brand new composition "Take It From Me", a great piece, written like most of her work from a contemplative & reflective perspective.

As ever much of the talk at Temperance was about cake & tea & Izzie kept up her much appreciated tradition of serving us her homemade brownies & very good they were too.  Quite how much baking she'll need to do for these upcoming festivals & for when she plays the Royal Albert Hall in due course....

Izzie is playing live this summer at:

If you get the chance to attend any you'll get some mighty fine music & baking.

I do like being taken be surprised by music (to be honest I'm not sure I enjoy reviewing music which fails in some way to do so) and I hope I am ...
[1 image] END_OF_DOCUMENT_TOKEN_TO_BE_REPLACED

If you are anything like me, among the myriad challenges to our communities currently being presented, the probable curtailment of live music for ...
[4 images] END_OF_DOCUMENT_TOKEN_TO_BE_REPLACED

One conundrum I face with reviewing the calibre of artist I tend to focus on (it's an enjoyable challenge really) is how to handle it when ...
[1 image] END_OF_DOCUMENT_TOKEN_TO_BE_REPLACED

It's odd: the more reviews you write, the more patterns emerge.
[1 image] END_OF_DOCUMENT_TOKEN_TO_BE_REPLACED

December 12th is a date many people have possibly been looking forwards to or dreading for various reasons.
[1 image] END_OF_DOCUMENT_TOKEN_TO_BE_REPLACED

I find myself here writing a review which I had never anticipated.
[1 image] END_OF_DOCUMENT_TOKEN_TO_BE_REPLACED

Well here I am again, this time reviewing not one but two artists on whom I fear I may have already used up my supply of appropriate superlatives in ...
[3 images] END_OF_DOCUMENT_TOKEN_TO_BE_REPLACED