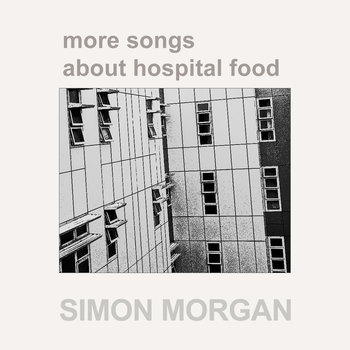 Warwickshire singer song writer Simon Morgan has a long & distinguished pedigree for producing music from the "heart on the sleeve" school of creation, where the integrity of the message is all. Emerging into the exciting & iconoclastic world of the late 70s Warwickshire punk scene alongside the Shapes, Flackoff, School Meals etc with his Stratford/Norton Lindsey  based group Domestic Bliss,  Simon later formed both The Suspects & The Hop & managed & played with the mighty  Ramrods of Coventry, who of course are still going strong.,

About ten years ago, Simon released  his debut solo album 'Domestic Abuse' (you can get it for free via his Bandcamp site).  He has now followed it up with 'More Songs About Hospital Food'  (I assume a nod there to Talking Heads' second album) and it is clear that this is not simply a load more tunes, but a very precise chronicling of his own life: in fact the songs are presented in the order they were written (something I have never previously encountered to my knowledge) & this explains why the first half sounds more like the folk album Simon was originally intending & subsequently the latter part veers into electronica as his musical journey took new turns during the process of writing & recording. The production by the way was by his nephew G W Birch (who is the only other contributing musician too) at Pathway Studios in Exeter.

If 'Domestic Abuse' was about Simon's road back from addiction (and this is a very key part of his music as it is with his life and work outside music), then the follow-up "is about the potential, purpose, passion and growth enabled by the recovery process". The title derives from Simon's "own stay in hospital in 2015 for septicaemia, and volunteering as an alcohol liaison in reach worker at UHCW from 2014-2017"

There have, lord knows, been plenty of great songs about addiction & even more about the immediate effects of substances. Few people (I can't actually think of any) have written whole bodies of work about recovery & the long term journeys of themselves nor the people they have supported & Simon deserves much credit for this. Knowing the structure too helps the listener perceive a linearity in the album which would otherwise be easier to miss.

Opener "Dark Side of the Spoon" sets the stall out very plainly: the title says it all & you are warned about what's coming,  in what is actually a catchy folk song with a voice, guitar & slide guitar telling the first tale. "Still Songs Unsung" is cut from much the same pastoral cloth in terms of accompaniment but here the author attempts to place his experiences within a broader intellectual  & conceptual framework: successfully too. "House of Leaves" sets off in a slightly different direction: in fact a western one with its harmonica and images of frontiers and Simon adopting a husky voice not dissimilar to the one Spider Stacy used in the Pogues.  "I'll Leave A Light On" combines slide, guitar & harmonica in the most Boblike track on the album  and is a most touching song, presumably about being left but keeping the option of a (welcome) return open. "Takes A Long Time To Heal" (Simon doesn't really go in for ambiguous titles) is more bleak: the vocal sound is placed in the near distance & for the first time, non-acoustic instruments enter the sonic picture, admittedly right in the background. Next up, "Pack Some Hope" steps up the arrangement drastically. I said Simon doesn't mess around with titles in respect of what they are about: however that doesn't exclude wit as evidenced by "Monopoly Bored" which references the board game throughout a track replete with samples & electronica & the theme harks back to the world view perspectives & political analysis of "Still Songs Unsung". Next up is"Frequent Flyer" and the electronic music is getting more experimental by the moment: here Simon's voice is processed in various interesting ways and he harmonises effectively with himself on this look at those who need NHS services more often than average & the impact on them of political running down of said institution..."The Kübler -Ross Model" references the ‘stages of grief' taxonomy and Simon runs that particular gamut while paying tribute to the eponymous Elizabeth.  Album closer "And So On, And So On" is the full monty in terms of its instrumental and vocal use of electronics and processing. This makes Simon seem the least ‘human' on the whole album: he sounds most disconnected if not alienated, yet the lyrical message does offer hope & the melody offers uplift...Which is a good way to sign the collection & this review off.