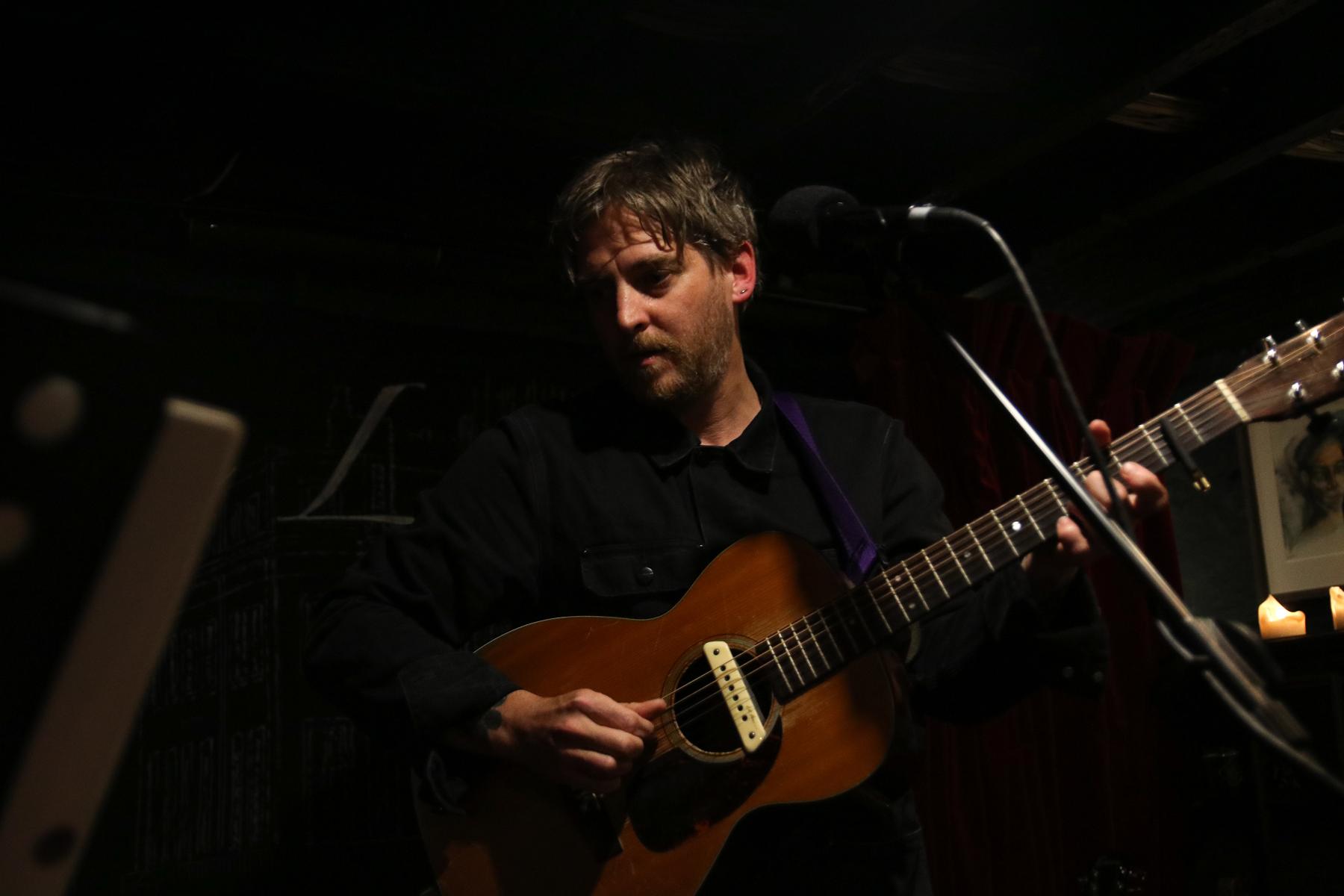 I hadn't seen Stylusboy play for quite some time so it was a great pleasure to catch him again, especially at such close quarters & with the bonus of hearing his new material (check out the "Hot Music Live" review of "Out Upon the Ocean"). The title track of his latest EP is a real favourite of mine at the moment: my only regret being was that I took its compelling lyrical imagery as being wholly metaphoric: his introduction however made it clear that it actually really is the story of a lighthouse keeper & his love... Never mind: the best songs are those which give the listener the space to interpret them as they wish & as they feel they apply to them. In fact space is a major element in Stylusboy's music: the same I'd say applies to Wes. Both obviously work very craftily on the words & want you both to hear them & take their meaning in as you listen, so that they have genuine emotional clout.

Talking of which, I was greatly pleased that he played a song that is for many of his fans his finest. I'm not sure if I can think of any other song which deals with the Coventry Blitz as movingly and convincingly as "For the Souls of My Brothers". If you haven't heard it yet..... They ought to play it on a loop at the Herbert.

You can catch up with all things Stylusboy at either of these two sites:

Wes (aided by long term collaborator Jools Street on violin for much of his set), roamed at will throughout his canon of work, solo & as part of various bands. We had two Silver Wye numbers, including set opener "Pick Me Up", several Mechanicals Band ones including their setting of WB Yeats from the new EP , ‘Miscellany #1'  namely "Meditation of An Old Fisherman"  and the setting of Phillip Larkin which is already a firm fan favourite, "Long Lion Days". From his solo album of 2015, ‘Awena' came the song Wes kindly let "Hot Music Live Presents" use  "Jackie's Stone" and you can hear & watch their performance here: https://www.youtube.com/watch?v=_UEZClMyM-k

If I had to pick out a couple of particular highlights other than the ones above, I might firstly cite the fact that Wes and Jools delighted the audience with  two of their Tile Hill Billy bluegrass tunes: two of their newest in fact, "Dill Pickle Rag" (a favourite of mine) and "East Texas Waltz"

I'd also like to mention Wes' performance of the highly personal"Got Your Back" which I thought he played with particular intensity and which moved me considerably. Another one I commend to you.

Stylusboy will be back at the Magic Lantern on July 19th supporting Irene Rae & then headlining a gig there on November 30th.

Wes & Jools will be back at the Magic Lantern on August 11th with Katrin, Ben & John as the Mechanicals Band (supported by Ellie Gowers) & Wes has another solo gig there on November 29th

You can also check out some of Wes' many projects at pages such as these:

If you are an admirer of the visual artistry of Russell Whitehead or the musical artistry of Wes Finch, or indeed of both as I am, then I'm sure ...
[1 image] END_OF_DOCUMENT_TOKEN_TO_BE_REPLACED

I'm sorry to say that I'd never previously attended one of the summer Sunday afternoon concerts on the Bandstand in Stratford before but ...
[7 images] END_OF_DOCUMENT_TOKEN_TO_BE_REPLACED

Very slightly more than twelve months ago I reported to you on Wes Finch's Leap Year gig: a special event to mark the four yearly occasion & to ...
[1 image] END_OF_DOCUMENT_TOKEN_TO_BE_REPLACED

Somewhat to my surprise, yesterday afternoon I found myself enjoying live music in the actual physical presence of the musicians creating it for the ...
[2 images] END_OF_DOCUMENT_TOKEN_TO_BE_REPLACED

There is some good news for Wes Finch fans awaiting the release of his Leap Year gig live album (as (p)reviewed in this magazine last month) He has ...
[1 image] END_OF_DOCUMENT_TOKEN_TO_BE_REPLACED

Well here I am again, this time reviewing not one but two artists on whom I fear I may have already used up my supply of appropriate superlatives in ...
[3 images] END_OF_DOCUMENT_TOKEN_TO_BE_REPLACED