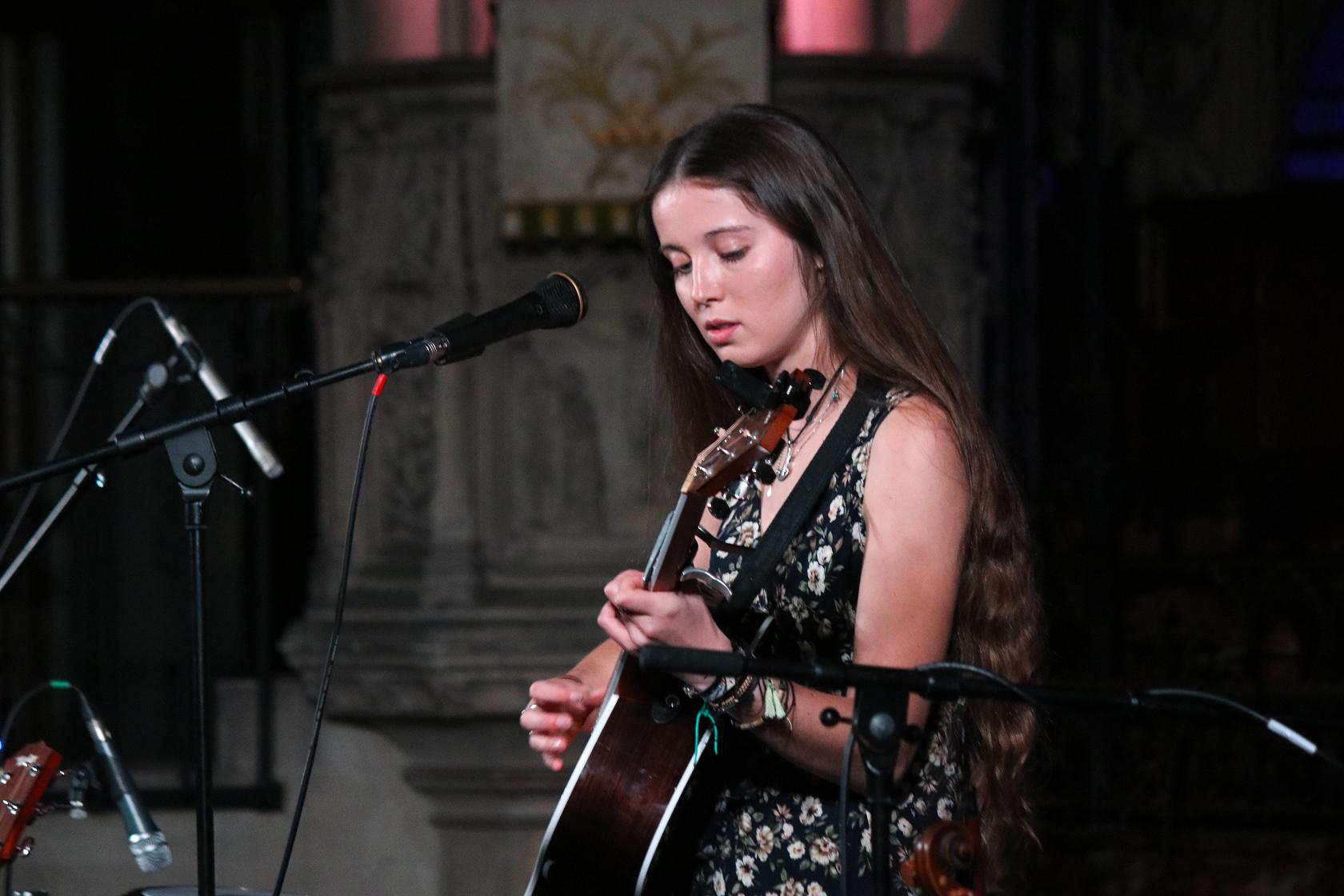 As previewed in "Hot Music Live Presents", last evening Izzie Derry, who has several times been reviewed in the magazine & is part of the "Hot Music Live Presents" project, supported Fairport Convention at All Saints Church in Leamington: a most prestigious gig (many thanks to Adrian Gains of Temperance/the Magic Lantern for organising it) & very much indicative of how her reputation is both growing & spreading. After all, a band of such stature could select virtually anyone. However, the full truth is even better than that. Talking to Fairport's Simon Nicol, he told me that in fact they tend not to have supports at all given the length of their own sets, but when Izzie's talent was brought to their attention, they changed their policy for her.  Bear in mind that this is a man who has been in bands with the likes of Sandy Denny, Shirley Collins,  Linda Thompson & Julie Covington so he certainly has a high benchmark of female singers. In fact the whole band were extremely complimentary of her skills & performance & as they took the stage after her, predicted the day they'd be opening for her.

As well as the experience of opening for such a band in front of a very knowledgeable audience in the largest parish church in the country (fortunately he recent experience of recording her ‘Lost At Sea' EP in a Hove church must have helped her awareness of acoustics in such spaces), Izzie played this gig solo without the musical & moral support of her excellent band and obviously, as she favoured more recent tracks in her setlist, having to rearrange them for solo guitar & voice. However not only did this reveal to a new audience her considerable confidence & performance abilities, it also emphasised how well written the songs are: yes they are superb on record with a full arrangement but work really well too when stripped back.

Getting into her stride really quickly, Izzie came across as really secure in the beautiful & cavernous environment. Her voice soared into the high vaulting as one might have predicted & there was considerable power there as required among the many quieter moments. She adapted well to the acoustics too, letting her voice ring & resonate  to great effect: I sensed subtle new dynamics in set closer "Give Me A Reason To Stay" and a slower reading of "Faith In Fate": both I'm sure in response to the situation. The highlight perhaps was a stunning version of "Learn To Grow" with great power & character on display & most striking some really long pauses for effect which I'd never previously heard her use live  in the song.

If the main focus of this review is on Izzie, I hope that you'll excuse me. She, as I mentioned above, is "one of ours" and having followed her for such a time, I feel I have some perspectives on her work, whether everyone agrees with me or not.  Although it might be conventional to illustrate reviews with photos of the headliners, I hope in this instance you'll accept my using one of Paul Newbold's great ones of Izzie.

However in terms of reviewing Fairport Convention, I feel rather "not worthy": this is a band of such excellent & reputation that I really wonder how I dare purport to pass any sort of comment on them at all. Sitting watching people like violin player Ric Sanders & bass player Dave Pegg who rate among the finest exponents of their instruments ever, the incredibly talented multi instrumentalist Chris Leslie ( I counted him playing fiddle, banjo, penny whistle, bouzouki, mandolin & harmonica but I may have missed a few), the great Gerry Conway (who interestingly swapped his drum kit for a range of percussion instruments, a cajon & and a Roland drum pad) and of course the legendary Simon Nicol who co-founded the band , I just felt slightly overwhelmed. And at such close quarters too. But this band, however skilled they are, don't grandstand. All their playing was in service of their songs (and if you have read my previous reviews you'll know how much I like that): players dropped out frequently & one measure of how they kept things simple at need was that I recognised more of Simon's chords than I usually do when watching players' fingers.

It is clear that a key to this band still playing together (the lineup now is much more stable than it once was), is great mutual enjoyment of each other's company & playing. They cracked repartee on stage constantly (Ric even went into a couple of full on comedy routines). They have a huge repertoire on which to draw, even if as Simon's interesting explanations made clear, there are emotional issues at stake: proud of their history & older songs, nevertheless they don't want to "trade" on them & so write new material & vary the setlist. At any rate, most of their classics simply cannot be played as on record, given the genius of departed members who defined them, so current version reflect the characters & talents of the members of today. Older songs such as "Matty Groves" were indeed played, most interestingly perhaps a male sung version of Sandy Denny's "Fotheringay" (from 1969's ‘What We Did On Our Holidays') and also "Crazy Man Michael' & "The Deserter" (like "Matty Groves" from ‘Liege & Lief' of 1969). The latter was one of the standout performances of the night for me, played with an unexpected ferocity.  Another one whose delivery I especially liked was a version of Ralph McTell's "The Hireing Fair" from 1985's ‘Gladys' Leap' which they have reintroduced to the set. In terms of keeping their musicianship fresh, there were a number of little clues: Gerry's d rum pad, Ric's subtle use of a range of effects pedals & even samples on" Moondust and Solitude".

Long time Fairport collaborator Anna Ryder joined them for three numbers (two of them playing her accordion) including the poignant yet rousing ("rousing but poignant"?) encore of "Meet On The Ledge": a thoroughly appropriate finale.

Returning if I may to conclude with some thoughts about Izzie: this gig certainly presented her with several challenges & to her great credit she took them in her stride & triumphed. Which is what those of us watching her expected. Her career to date has been a series of quantum steps up, this merely being the latest: this is an artist whose most recent record found her saying "I have learned to grow" & "I have made it this far". And so she has & who knows what further great leaps lie ahead of her? Fairport Convention are the latest highest level musicians to recognise what a great talent she is & has the potential to be, but they are not necessarily the first, nor I hope the last. She looked right at home sharing a stage with them.

The next live steps on her voyage include: 12th May at Coventry Food Festival and the Big Feastival in the Cotswolds (23rd-25th August). If you haven't yet joined the growing legion of Izziefans, I hope you'll get a chance to catch her live this summer. If so, she might give you a brownie (though as the gigs get bigger I wonder how long that can last? Be putting a lot of baking pressure on).

It is a particular pleasure to report a gig which features not only artists who are as important in the history of popular music as Fairport ...
[1 image] END_OF_DOCUMENT_TOKEN_TO_BE_REPLACED