"We All Write The Songs" by Rob Halligan


"We All Write The Songs" by Rob Halligan 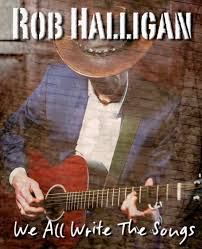 As promised in my review of Rob Halligan's recent gig at the Magic Lantern with Kristy Gallacher, here is my review of his most recent album, "We All Write The Songs"

The title relates to Rob's belief that we all have a song to sing & he encourages us to find our own.

I picked out in my live review a couple of songs off the album which instantly caught my attention , namely "We Listened to Ray" and "Bigger Than That": now I get to describe to you all of them, whether he performed them on Friday or not.

All are Rob's originals save the final "The Parting Glass", the traditional Scottish song which oddly I know best by various Irish musicians:  I think I first heard it by the Pogues but it was the Clancy Brothers who really (re)introduced it into the folk repertoire. Rob sings it in a much more intimate & gentle style: you can imagine it being sung thus by the hearth rather than in a concert hall.

I described "Bigger Than That" as something of a manifesto, statement song previously & I stand by that. His belief runs through the DNA of the set of songs & informs most if not all of them. On this one he uses it as a challenge to us all to question the potential narrowness of values & transcend them.

The associated "Love Is Bigger" (which is the tagline on his free stickers) is a bright chiming number: I can see why someone might compare it with Dylan as it does share some ideas with songs such as "Masters of War" though unlike that piece it offers an alternative to the behaviours it decries.

Opener "We Listened To Ray" is, as I said the other day, a bit of an ear worm. Concerning itself with the effects of influencers on our lives, it cites sources from the local & mundane (a bloke he met in a cafe) to the better known (assuming "Joe" to be Joe Strummer & "John" to be Lennon) including Matt who is in fact Gandhi as "Mahatma" has too many syllables to fit. However the message is clear: "tip your hat" if need be but don't blindly follow leaders (some of their advice was not helpful if not dangerous): we all need to write our own songs.

"Elena" is another ear worm, rather latin tinged but with a much more rock style arrangement on the album: the sort of track which sings out "single" though in fairness it is not the only one to do so.

"God Knows What It's Like" is again a fuller arrangement in a sort of country rock style and is succeeded by the really stripped back & raw "When Heroes Fall": quite a transition. The latter exposes Rob's own playing to good effect & is an excellent showcase for his live act.

"Hold You Tonight" is another simple arrangement which cuts to the essence of the artist: this is tender, a love song but infused with the same optimistic spirit one finds throughout.

The songs on the album do seem sometimes in pairs, and as "Bigger Than That" is followed by "Love Is Bigger", so "Hold You Tonight" has "Hold Lightly" immediately after it. This latter shares a similar premise of commitment to future life & love, though whereas the former has a first person stance, this one complements it by slipping into a second person one.

"Most Blessed Man" is another of the starker arrangements with the initial simple guitar & voice later gaining subtle extra components which add texture without remotely distracting from the main performance which in its understated way is nonetheless passionate.

For those who like to know as much about the technical sides of artists' work as I am capable of passing on, Rob plays three guitars on this album (he owns many & each has its name): "Bartholemew" which is a Martin Series X and played in D Modal tuning, "Patricia", a Simon & Patrick S&P6 (played in Open C tuning) and Moon Dog Auditorium "Zac" (which I assume to be played in standard tuning)

If you'd like to see Rob play live, you can actually book a stop on his Wild Horses Tour: all you need is a suitable hall or living room & the cost basis is "whatever you can afford": details via info@robhalligan.co.uk

I'm much obliged to Rob Halligan who has been in touch with me to ask me to pass onto readers of "Hot Music Live" the details of Motofest 2021: ...
[1 image] END_OF_DOCUMENT_TOKEN_TO_BE_REPLACED

Although his spirituality informs & enriches virtually all his work, in April 2019 Rob Halligan released a very explicitly sacred collection of songs ...
[1 image] END_OF_DOCUMENT_TOKEN_TO_BE_REPLACED

Fresh out today is a live album of the special lockdown gig which Rob Halligan played at Coventry Cathedral with the help of Ewan Cameron and Chris ...
[1 image] END_OF_DOCUMENT_TOKEN_TO_BE_REPLACED

Today marks the release of the new Rob Halligan single entitled "Bigger Than Me", a swift follow up to his ‘Christmas Time' EP and as ...
[1 image] END_OF_DOCUMENT_TOKEN_TO_BE_REPLACED

Rob Halligan is another of our local musicians who could certainly be described as "prolific" in terms of just how much excellent music they are ...
[1 image] END_OF_DOCUMENT_TOKEN_TO_BE_REPLACED

During the last eight months, I have reviewed releases I had some inkling of in advance, a few well in advance, some complete surprises & some long ...
[1 image] END_OF_DOCUMENT_TOKEN_TO_BE_REPLACED