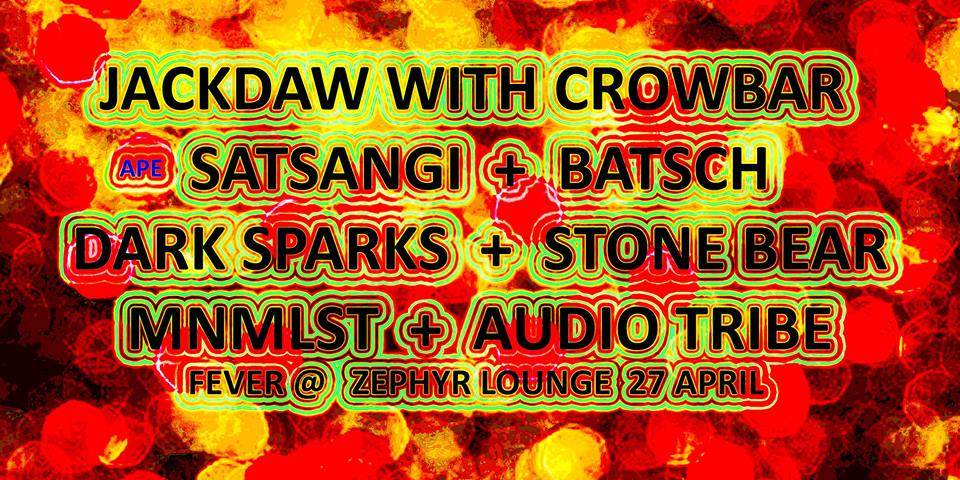 I have often written about the wonderful, in fact the weird, thought provoking & wonderful evenings Johnny Satsangi puts on at the Zephyr Lounge under the "APE" banner: in fact I think I have reviewed every one of them. What I haven't ever done is quote the mission statement of APE & I think it is worth doing now:

"A collaborative partnership set up to promote live and recorded music of artists connected by 'a maverick spirit', a need to 'make things happen', a fierce sense of independence".

It is also worth saying how important this night is for promoting & nurturing all sorts of local music: from the perversely maverick to the emerging acts: last night had prime examples with the lineup being bookended by two such, both from the LAMP community. First was the new MNMLST and last were veteran mind guerrillas Jackdaw With Crowbar. Where else might you hear such acts? I overheard a couple of rather well fuelled young men who'd arrived late complain about the latter "this music is doing my head in". I think the band would view that as a testimony to their aims.

Sandwiched between these two extremities were four (yes it's worth saying as I always do, that with APE you certainly get your money's worth) excellent acts: two of them among those I regularly review as I think so highly of them, one which in APE tradition was new to me & one which is evolving as we speak, each involving some great local musicians.

I reviewed Stone Bear only the other week but they bear re-reviewing not only because they are so good but because their performance was quite different to that in the Magic Lantern. Whereas the latter had involved a quieter & more laid back approach suiting the intimate space, in the Zephyr the volume was back up & the bear roared: which was just as well as heavy on stage smoke partially obscured singer/guitarist David & fully wreathed drummer Jeff. Fortunately the power & precision of their playing cut through the mist.

I have also reviewed the "acoustic rap" collaboration between Brudez (Clint Bruder) and Shanade & indeed they were billed as such for last night until quite late on when they evolved their "Tucked in the Nook" jam backing band into a new fully collaborative band called Dark Sparks. Now featuring material from both of them plus inputs from musicians such as Justin Bygrave (one of my favourite local bass players) and keyboard player/guitarist Andy Haring (whose playing adds an excellent dimension to the band), the acoustic element has gone (bit of a pity in many ways as I liked it) and Felix was unfortunately absent too but the sound they are starting to forge has its own dynamics. Let's see where it goes when fully realised.

What can I say about headliners Satsangi that I haven't previously said on numerous occasions: what a great band. Well they debuted an excellent new song last night which fits into their oeuvre nicely but a great thing about them is that they never play the same way twice. On this occasion we got a brooding menacing Satsangi: I've heard them play the songs faster and with greater punk or rock attitude, but now we got slower, vicious interpretations with Su often altering her vocal stylings. Great stuff! I don't know how you'd begin to compile a live Satsangi album as they never rest on their laurels: you'd need to feature pretty much every performance to demonstrate just what each song is capable of meaning.

The wild card for me was Coventry "dark disco" (their words) band Batsch. I was greatly impressed by them & wish I'd been closer (I had merch stall duties at the rear of the room), but I did have the pleasure of standing with leading Leamington music expert Dr.Um and he pointed out the Japan-like aspects of the songs: and certainly they did display both eastern tropes and an attractive fluid bass sound. Edgy, with self proclaimed Talking Heads influences, they are a band I should very happily see again: preferably from closer quarters.

It is a sad state of affairs when the main hall at the Assembly tends to host tribute acts (this was the case last night) while the smaller Zephyr Lounge has such vibrant & exciting original talent.  The only way fresh music will be made is if it is encouraged & people take the time & courage to open their ears to the less familiar. For this they need opportunities: more media playing new artists & venues & promoters putting on gigs like this. Hats off to Johnny & Team APE.

I reviewed (back in November) the most recent single from Satsangi, "World Falling Down" and mentioned a little bit at that time about their ...
[1 image] END_OF_DOCUMENT_TOKEN_TO_BE_REPLACED

Fresh out from Satsangi is "World Falling Down", (their first since they raided their own vaults for the "Don't Want Anything But More" single ...
[1 image] END_OF_DOCUMENT_TOKEN_TO_BE_REPLACED

During these turgid times when there is a distinct danger of every successive day seeming like its predecessor, it's helpful to be surprised now ...
[1 image] END_OF_DOCUMENT_TOKEN_TO_BE_REPLACED

Satsangi, never a band to shirk a challenge nor to be meekly led by fate nor wander aimlessly down roads many others have trodden previously, seem to ...
[1 image] END_OF_DOCUMENT_TOKEN_TO_BE_REPLACED

Well life under lockdown continues to evolve doesn't it: even, or perhaps especially, our musical life.
[1 image] END_OF_DOCUMENT_TOKEN_TO_BE_REPLACED

Some excellent news for lovers of music which dares to be a bit different.
[1 image] END_OF_DOCUMENT_TOKEN_TO_BE_REPLACED

The Bonnevilles at the Zephyr Lounge

Many thanks to Stuart Smith of Leamington's Seismic Records for a heads-up about an upcoming show he is promoting at The Zephyr Lounge on ...
[1 image] END_OF_DOCUMENT_TOKEN_TO_BE_REPLACED