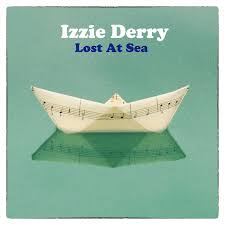 A real headache for me is trying to express my admiration for work I consider is an artist's best so far without sounding like I didn't like their previous material. I find myself in this dilemma quite a bit at the moment as several artists whom I review regularly go from strength to strength.

So I'll try to be clear. I have always liked Izzie Derry's work: she was a great & individual writer from her teenage years (and let's face it, the bulk of her released work still dates from those years so early in her career as we currently find her). However her latest release, the "Lost At Sea" EP is a big leap forward: a wonderful development as she finds different & new ways to express herself.

A very big part of this must be the milieu in which she finds herself. Her previous work was mostly solo. Now she is studying music in Brighton & not only must there be stimulus from that process, but also from living in such a vibrant town but above all from her close new musical collaborators: kindred souls she has met down there & who play on the EP and her current live dates in various combinations due to venues etc: Jake Morris, Herbie Walker, Tom Hammerton, Jack Smith, Noah Haines, Ellie Timlin and Eva Trim. These are all excellent musicians who enhance the songs they play on & record their own. For example check out Herbie & Ellie's current single "Get To You".

"Lost At Sea" was recorded live in a church in Hove under Jake's supervision & this plays very much to Izzie's strengths: her songs live & breathe live (despite the extra textures her friends bring to these songs, they are still playable & indeed played by Izzie on solo guitar when required, so strong are they as to be enhanced by arrangements rather than fettered by them). They form a companion piece I think to her last album "Goodbye" which had a theme around leaving home to study. These tend to express her subsequent (inner) journey of what has happened since then. Izzie uses allusion & metaphor well in her lyrics, but is an open & candid writer: "Goodbye" told you what that collection was about & now songs which tell us "I have learned to grown", "I put my faith in fate" or "I have made it this far" don't keep her reflections secret from us.

I first heard "Learn To Grow" live last summer and it hit me on first listen. At that stage I didn't even know its name (I had to ask Izzie in order to mention it in a review) nor managed to pick out all its lyrics, but after repeated listens I am so pleased that the world can now share this superb song. There is a really good video to go with it (it preceded the EP in single form a couple of weeks ago) by Russell Whitehead at https://www.youtube.com/watch?v=YwYqLoItFLA&fbclid=IwAR1VTiP2m0-Z2ditQZgJTIkSKJUw5wI7Y8tEN9QXnWBVyWvF3-mJU1wGczQ

Really very different to anything she has done before, this alone shows I think how the arc of her work is on a steep trajectory. It's not only me of course: more & more reviews, radio interviews plus gigs around the country tell you how her fame is spreading. Not least is the news that she will be supporting Fairport Convention on May 7th at the Parish Church in Leamington: now who supposes that band would pick anyone for that role they didn't hold in high esteem?

The songs bob along & rock like a boat on the sea (Izzie has been living afloat while in Brighton, which may be discernable from the EP launch promo picture connected to this article) but the only element in the entire record which puzzles me is the "lost" bit: Izzie sounds utterly comfortable in her music & herself. You could put her & her boat down in the midst of the ocean & I'd back her to find her way home to harbour.

"Learn to Grow" opens the record & as I have said is a single too. This is clearly going to be a real highlight of her set for a long time as "Give Me A Reason To Stay" has been & I'd like to think will get much airplay. It is a real earworm.

"Made It This Far", "Faith In Fate" and "Life is A Gift" will also be familiar to anyone who has seen Izzie live in the past year and as with the first track offer instalments in her current personal manifesto while sonically offer a series of contrasting moods & musical styles. The mandolin led (played by Izzie) closer "Carry Me Home" is the track I've heard least until this point and is the most overtly maritime allusion on the EP. Like all the tracks, Izzie sings with great confidence and élan & the instruments enter & drop out to excellent effect.

If you'd like to hear these great songs live, you can catch Izzie & her band at the Tin on May 4th (for an official EP launch), as mentioned at Leamington Parish Church on May 7th with Fairport Convention or at the Magic Lantern at Temperance in Leamington on July 13th with support from King of the Alps.

I stumbled across another review of the EP online, which although quite positive (though also pretty short) which claimed that the record "doesn't offer the smoothest melodies and most polished soundscapes". I think I'd like to take some issues with this: it's a live recording which captures the honesty of the music & the musicians: "polishing" it I think would be a disservice to her integrity and authenticity (and I am sure these attributes must appeal to the Fairports). I also find it beautifully melodic: the melodies however sit on interesting rhythmic bases and I would have thought that melody was one of Izzie's strongest suits from the start. So I beg to differ.

I think this is going to be one of the most significant releases from a Coventry & Warwickshire artist in 2019: if I were the sort of reviewer to nominate a "Single of the Year" then "Learn To Grow" is definitely a contender.

I do like being taken be surprised by music (to be honest I'm not sure I enjoy reviewing music which fails in some way to do so) and I hope I am ...
[1 image] END_OF_DOCUMENT_TOKEN_TO_BE_REPLACED

If you are anything like me, among the myriad challenges to our communities currently being presented, the probable curtailment of live music for ...
[4 images] END_OF_DOCUMENT_TOKEN_TO_BE_REPLACED

One conundrum I face with reviewing the calibre of artist I tend to focus on (it's an enjoyable challenge really) is how to handle it when ...
[1 image] END_OF_DOCUMENT_TOKEN_TO_BE_REPLACED

It's odd: the more reviews you write, the more patterns emerge.
[1 image] END_OF_DOCUMENT_TOKEN_TO_BE_REPLACED

December 12th is a date many people have possibly been looking forwards to or dreading for various reasons.
[1 image] END_OF_DOCUMENT_TOKEN_TO_BE_REPLACED

I find myself here writing a review which I had never anticipated.
[1 image] END_OF_DOCUMENT_TOKEN_TO_BE_REPLACED