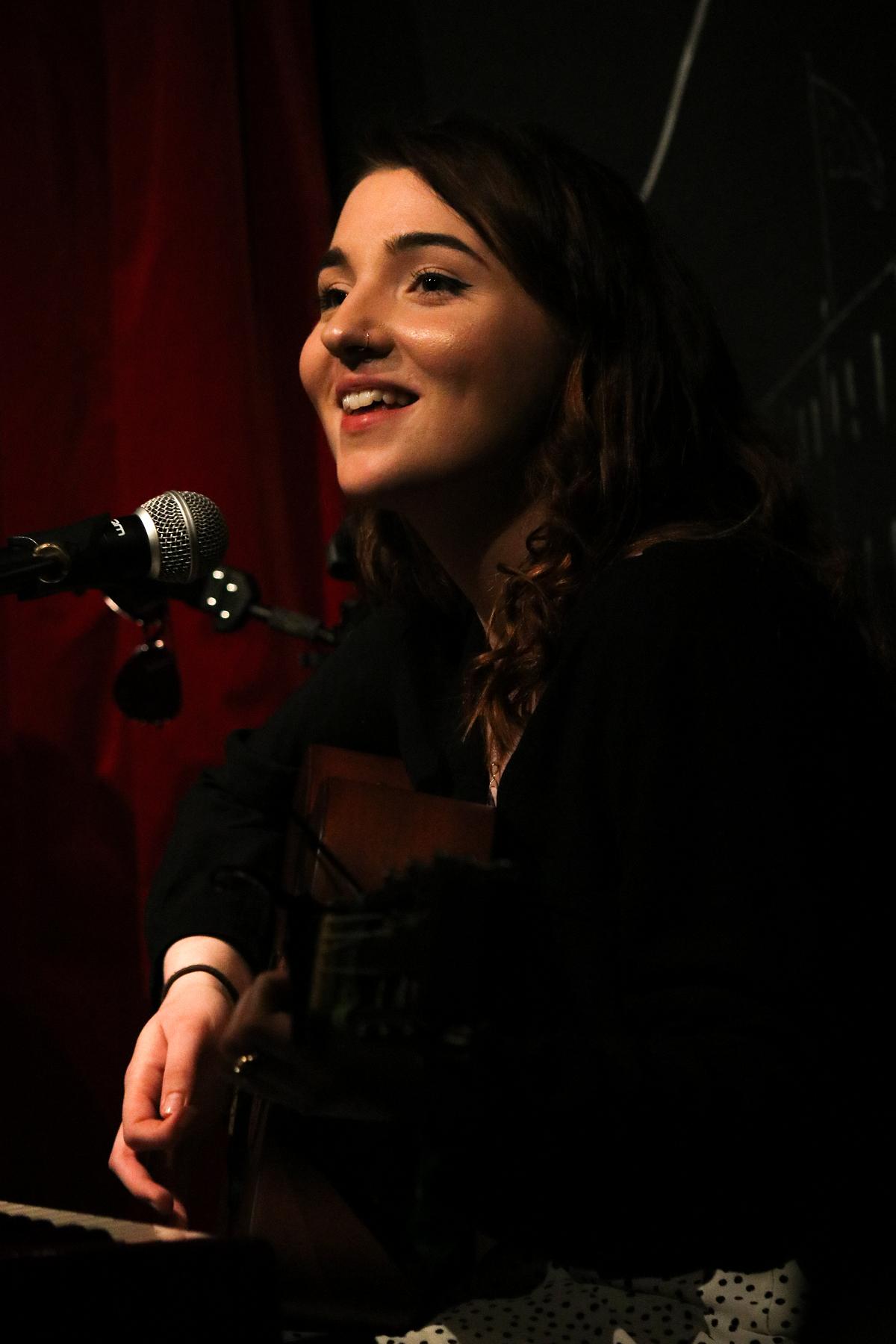 I'm going to go with "spell-binding" as my key word (two words?) for last evening's gig. As you'll have noticed, I am hugely obliged to Paul Newbold of Lightspark Music Photography  for his marvellous photos for many of my reviews, but nevertheless I still like to take a few of my own & the occasional video. So spellbound was I last night that for long stretches of time I was so caught up in the performances of Hannah Woof & Ellie Gowers that I forgot my camera...

In theory, any review of these two incredible writers & performers should be really difficult as I have done so for each of them recently: in practice new reflections on my part & new revelations of aspects of their art on theirs made it really easy.

I've said it before, but it bears repeating as I think this is a point which lies close to the heart of why our local music scene is thriving currently, but so many of our best musicians go out of their way to really back up their friends. The Magic Lantern was absolutely rammed for the gig. Friends were there, families were there. People who had never seen either artist but had picked up on the word of mouth were there. There were many musicians too as both are so popular & regarded including (amongst many) Callum Mckissock who was originally going to be the support act but was unable to for health reasons & Joe Dolman who co-wrote one of Hannah's songs she played.

Ellie, whose own stunning headline show at the venue is still reverberating around our minds only a few weeks on, opened with another breath taking set, one "Robin" being a cappella & the rest on her guitar. As I noted last time, she sings like an angel yet moves like a rock star. I was thinking as I watched her again how much she reminds me of the folk artists with attitude: I'm not surprised she admires Richard Thompson as you can detect his influence not merely in the music but also in her uncompromising approach to both a full commitment to her delivery but also in her lyrical frankness of emotions. I'd also bracket her for this energetic style with favourites of mine like Billy Bragg or Kate Rusby & hope I'm not offending her by so doing.

She is recording new material in 2019 & quite a bit of this appeared in her set: it is really compelling & I am greatly looking forwards to hearing it: some incredibly high quality songs with real emotional punch set in exquisite melodic frameworks.

My last two Hannah Woof gigs were when she was supporting her friend Izzie Derry and one remarkable thing has been the over the arc of those three performances I have seen her gradually revealing her talents like a bud slowly opening in the Spring sunshine to display its secrets. The first time, she accompanied herself on her guitar & was great. The next time, she split her time between her guitar & the Magic Lantern piano, unveiling some very fragile & haunting songs played with a very very spare style: watching her play keyboards is interesting: her fingers move slowly as if reluctant to play more notes than is absolutely necessary nor make too much noise. Last night she played guitar and her own electric keyboard & occasionally sang without either, as this was made possible by her accompaniment by (Ellipsis) guitarist John Connearn. This was an excellent development. They had worked hard on all the songs in the set & John was able sometimes to provide the only instrument to free Hannah & on most others added extra layers to the  arrangements. Their two guitars entwined beguilingly on several numbers & the guitar & keyboards complemented each other on the rest. He also sang backing vocals throughout: if that's the best word: sometimes they were backing but often they harmonised yet he always let Hannah's voice take precedence.

And what a voice: much as I have praised it twice before, headlining her own gig seemed to lend Hannah an extra fillip of confidence & there was a considerable power which she unleashed when appropriate. She  writes very personal songs & this gives them a distinction & personality which helps them impact. There is a considerable wit in both her words & her delivery of them: another of her strengths I think is in interpreting lyrics.

This was a really high class gig which had attracted a lot of buzz beforehand & to which a number of people had taken considerable efforts to be able to attend. It has received wonderful feedback not only from those who knew full well how good it was going to be but also from those who have seen these artists for the first time. Please do go & see them both, especially if in a venue where the full quality of their talent & intensity of their performances have maximum impact: they are among the finest current local musicians & who knows where their destiny lies?

During the last sixteen bizarre months or so, coverage of Coventry & Warwickshire artists in these pages has taken on unusual patterns.
[1 image] END_OF_DOCUMENT_TOKEN_TO_BE_REPLACED

A mere few hours ago, on the stroke of midnight in fact, Hannah Woof released her new single, the zeitgeisty "Self Care", her first since her equally ...
[1 image] END_OF_DOCUMENT_TOKEN_TO_BE_REPLACED

I wrote last week of the issues & tensions which must exist around even the best artists as they develop their individual voice & sound yet need to ...
[1 image] END_OF_DOCUMENT_TOKEN_TO_BE_REPLACED

Well here I am again, this time reviewing not one but two artists on whom I fear I may have already used up my supply of appropriate superlatives in ...
[3 images] END_OF_DOCUMENT_TOKEN_TO_BE_REPLACED