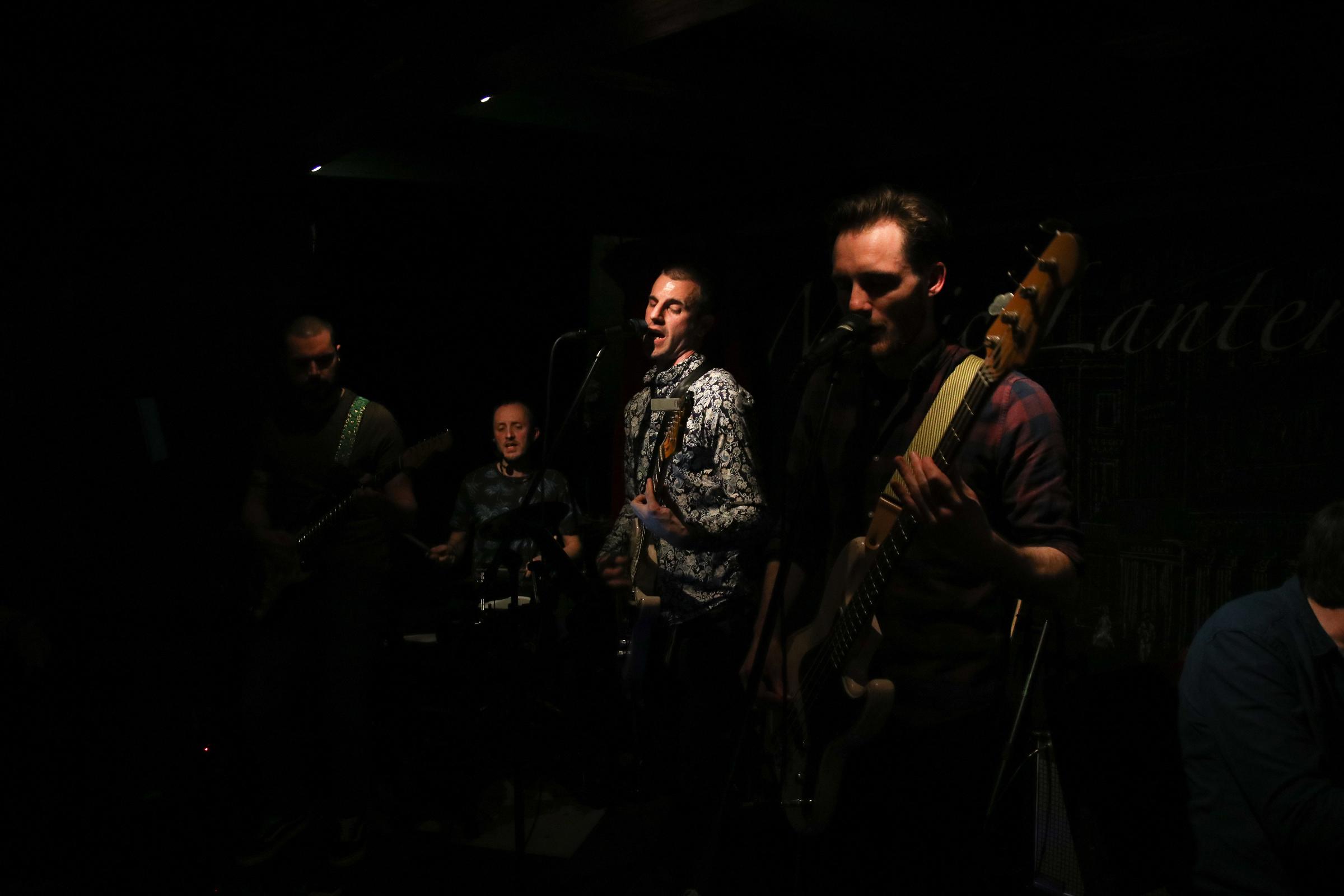 In an interesting coincidence, it is a year & a week since I reviewed the album ‘Grand Union' by Chalk Drawings in ‘Hot Music Live'. Last night I had the pleasure of catching up with them again at the Magic Lantern & although they played several songs from that great album, things had moved on in that time. (If you haven't yet downloaded their track "Rag & Bone", which is on ‘Grand Union' from "Hot Music Live Presents Vol 1", for which we thank them, you can from here, for free: https://hotmusiclivepresents.bandcamp.com/track/rag-and-bone)

Firstly, a year or so ago, a Chalk Drawings gig (unless it was one of their collaborations with Blind Faith), tended to feature a three piece line up:  Simon Dagger (vocals & guitar) Rob Lewis (bass) and Kev Stanley (drums) with the occasional live performance by their associate keyboards player Russ Tovey (who plays on the album). Last night we had a five member band with not only Russ playing the vintage Magic Lantern Dale Forty piano (which added all sorts of extra textures to both originals & covers) but new additional guitarist Dan Holford who has joined the band, allowing him & Simon to alternate lead guitar parts & liberate the latter from having to play lead & rhythm on top of singing.

The next thing to mention was that Chalk Drawings had invited Ellis Gallagher to support them. I really raise my hat to them for this: Ellis is, I believe, only seventeen & to be given the chance to play with such a great band in a venue where every audience member was both fully attentive & fully supportive is something they deserve credit for: it's input like this which really helps younger musicians develop & find their own voices rather than struggling for live opportunities & being pressured into trying to sound like established stars.  I am in little doubt that the band are right: Ellis possesses much potential & you can tell that he has  interesting and unique preferred singing & playing styles which will help shape  original material: not surprisingly, his set last night reflects the stage of his development being founded on covers. His voice and guitar style are certainly his own: they reminded me of interesting artists I have long liked (I wonder if he has listened to them?), with a stark & insistent strumming set in a very trebly tone: I thought of various Velvet Underground songs but also those VU influenced bands which emerged during the "post punk" era: often on Scotland's Postcard Records but it did directly remind me of the playing of Tracey Thorn when, pre-Everything But The Girl, she was the Marine Girls' guitarist. Last night, extra support was given as Ellis was backed (he usually plays solo) by Simon on bass & Kev on drums, complementing & enhancing his playing rather than imposing their own styles.

Another novelty in the Chalk Drawings own set was of course new material: they played several new songs, like all of their material rather difficult to pin down in terms of genre but all effective & all of which went down well with the audience. I understand that release of several of these tracks is planned for 2019: like so many of the acts I like, they are going for a single or EP rather than an album: since Simon tells me that the songs aren't part of an overall narrative like ‘Grand Union', there is no need for them to be grouped like that record.

The five members blend together beautifully: there are two very key dynamics going on. Firstly, they obviously greatly enjoy playing together & this is obvious from watching them & grants their music that edge of integrity & joy above even their considerable musicianship: and that itself is superb and impacts on the audience's reaction. Secondly, they clearly work hard at making their often complex songs seem effortless. They had a looseness born of the joy I mentioned but a tightness from presumably much practice. The gig began at eight. The band arrived around two o'clock to really get the sound perfect. They succeeded & this tells you a lot about them.

At this point, I think I'll take a break from attempting to describe them myself & share the direct words of Kev with whom I was discussing the various aspects mentioned above

"We try to not over power each other musically too. Letting each other have room to breathe.. It's like baking a cake. Put the right amount of ingredients into the mix, & it is a grand result, but too much of something can ruin everything..... None of us have egos whatsoever...."

Which says more than I ever could.

For those of you never to have witnessed a Chalk Drawings gig, I suggest that you do: check out their web page for several imminent dates. Like their album, their live set incorporates the many styles they are adept at & this makes for well paced sets & attention keeping variety. Russ on the old piano helped bring their traditional music hall side to life & they encompassed ballads, rock etc but deep down, I suspect they have a particular love of funk as they are so good at it & put the funk into so many songs as either the major element  or part of a contrasting passage. Oh & they encored with a version of "Town Called Malice' which was a damned good end to a great night in my opinion.

Years ago, I am not sure I could imagine myself reviewing a concept album.
[1 image] END_OF_DOCUMENT_TOKEN_TO_BE_REPLACED

Well here I am again, this time reviewing not one but two artists on whom I fear I may have already used up my supply of appropriate superlatives in ...
[3 images] END_OF_DOCUMENT_TOKEN_TO_BE_REPLACED