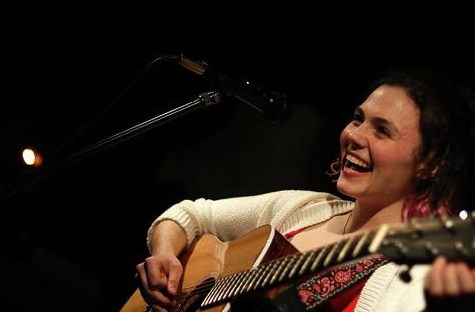 Last evening was one of local music's most anticipated gigs of 2019 so far. Ellie Gowers is one of our area's most talked about & admired artists (by audiences & fellow musicians) & one whose star is waxing greatly. As she has been involved in the Bristol scene for the past few years, her fans have seen less of her around her home town & in fact it is quite a while since she has played Leamington. The Magic Lantern was consequently packed with tickets having sold swiftly. Ellie expressed her own pleasure not just of playing before her family, friends & local admirers but also as she had the chance to play a really long set, dusting off old songs she isn't always able to fit in & unveiling several brand new ones, mainly to be recorded next week in fact.

Naturally highly anticipated gigs can pile pressure on the artists & can struggle to meet excessive expectations. Not so on this occasion I can assure you: both Ellie & her support Henery (sic) enjoyed themselves as much as their audience & speaking for myself, my very high expectations were met & greatly exceeded.

Henery was a revelation. This was, he told us, his first solo gig of his original material in half a dozen years. Since his career with the Ellipsis is going so well, it is understandable that he has not had time for both. This is a huge shame (in a way: I'd certainly not want him to neglect the band) as he has some extremely well crafted songs of his own (there were so many songs from both artists all night and not one of them was "filler": if you want consistent high writing you can look to both for it). So did he sound like the Ellipsis was a question I asked myself in preparing for writing this & I still can't answer that I'm afraid. Obviously it is the same voice & the same musicianship. The same instinct for the catchy yet subtle. Solo work does him great credit as obviously with just a voice & acoustic guitar it showcases his talent in both departments. Yet the material was rather different from the band's. Occasionally "folk" in vocal & playing style, each song displayed a different character (which is great for holding the attention of the crowd).

I urged him to play more solo gigs (hopefully he will return to Temperance in the autumn) and he tells me that he is going to record this material so you can all share in what I enjoyed. In the meantime, you can check him out on his page here: https://www.facebook.com/heneryuk/

As for Ellie... well the set started in breathtaking fashion: and that set the scene for an astounding performance. Ellie bookended her performance with a cappella songs. She began with a rendition of her own song "Robin" (which I reviewed in "Hot Music Live" in August 2017 as the title track of her EP). She just stepped up to the microphone, with no introduction at all & began singing this beautiful song with no accompaniment. People were still taking their seats even: but she grabbed their instantly attention & proceeded to hold it all set: this artist can certainly create quite an impression on an audience & has a very strong bond with them. She talks of her desire to break down barriers between performer & those listening: you'll not be surprised to learn that we were invited to participate too. To skip forwards, the set ended with another unaccompanied version, this time of "Falcon" by Mimi & Richard Farina. It is possible that there were a few wet eyes by that time.....

In between was quite extraordinary. Like Henery, Ellie's set contained remarkable writing & diversity, working our emotions right through. This is one heck of a stage performer though: armed only with a guitar or mandolin (and twice with neither as noted) plus an amazing voice, Ellie puts on a real show: none of which is contrived. She told me at the end how much she inhabits her songs while playing them & you can surely tell. Rarely still in face nor body, Ellie stalks, dances, bops & sways. If you filmed her & ran the footage without sound, you'd not equate her to "folk" (the usual label for her): she moves like a rock performer. Ranging (often within the context of the same song) from conveying heartrending tenderness (her cover of Richard Thompson's "Beeswing" being a highlight in terms of this end of her emotional spectrum) to sheer gale force power, Ellie delivers songs of considerable complexity and depth of tone: they are extraordinarily well crafted & then delivered. She noted that her Dad had felt that one of her new songs was overly loud: personally I thought it was excellent: definitely folk rock rather than folk.

Her songs include those about personal experiences & reflections, encompass  traditional folk idioms occasionally  even delve back into musical archaeology with her authentic Tudor rendering of the sixteenth century hit "Greensleeves" with her mandolin standing in for a lute.

I walked home afterwards with my head full of things I wanted to say about the night: I knew that the danger was of my saying far too much & losing your attention (ironic given that neither artist claim close to that), so I've reined myself in, hoping I've managed to convey something of our experiences last night. I'll just repeat what I've said so often recently. We are so lucky to have so many unique & fiercely individual artistic voices around at present: it was not always so & unless we support & demonstrate our support for them, we may not signal how much their art means to us all. I can't wait to see Ellie again & a date back at the same venue is being set up as I write.

What a joy to tell of you of the release today of the new Ellie Gowers single: "Brightest Moon", itself one of the tracks on her new album ...
[1 image] END_OF_DOCUMENT_TOKEN_TO_BE_REPLACED

Strange and wonderful times: I find myself today writing my second live report inside a week.
[3 images] END_OF_DOCUMENT_TOKEN_TO_BE_REPLACED

One of the many frustrations of the past year has been the loss of momentum in the careers of various local artists who were so obviously on a roll: ...
[1 image] END_OF_DOCUMENT_TOKEN_TO_BE_REPLACED

For those of you who have been deprived of hearing the music of Ellie Gowers (I was fortunate enough to catch a live set on February 29th, but that ...
[1 image] END_OF_DOCUMENT_TOKEN_TO_BE_REPLACED

Some of the records I review for "Hot Music Live" come to me out of the relative blue.
[1 image] END_OF_DOCUMENT_TOKEN_TO_BE_REPLACED

One thing which I guess always gets the pulse of a reviewer speeding up is the chance to write about someone whose musical career is just taking off: ...
[2 images] END_OF_DOCUMENT_TOKEN_TO_BE_REPLACED

Well here I am again, this time reviewing not one but two artists on whom I fear I may have already used up my supply of appropriate superlatives in ...
[3 images] END_OF_DOCUMENT_TOKEN_TO_BE_REPLACED