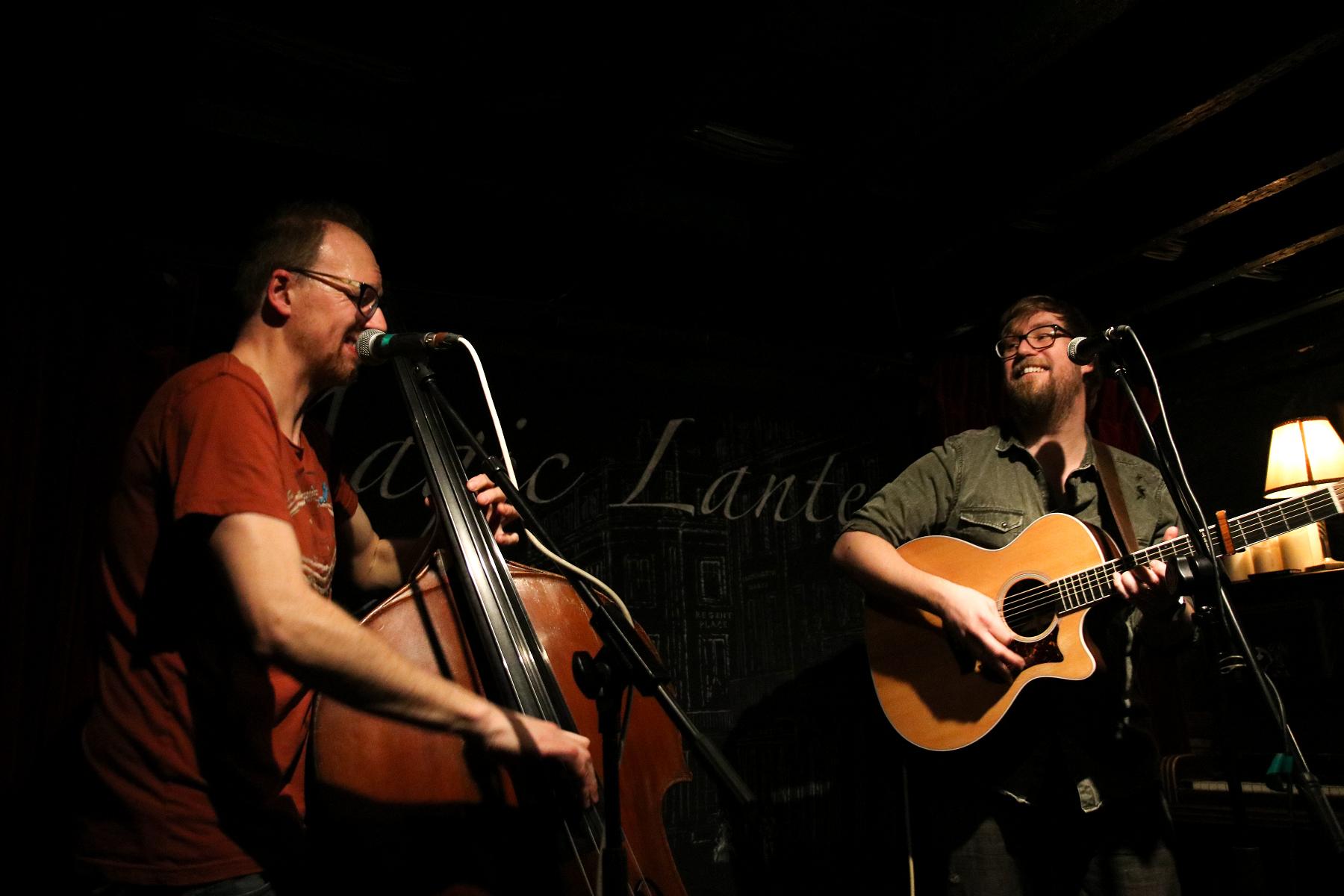 Leamington music lovers will need little reminder of the virtuoso skills of John Parker which he has displayed to chart topping success and international acclaim in Nizlopi & which today he shares with a host of other artists (including Ed Sheeran & Kate Rusby), not least the Mechanicals Band which has often featured in "Hot Music Live". This time, he was performing at the Magic Lantern as 50% of ‘Ward ‘n' Parker' with Cliff Ward, who is a founding member of folk super group The Willows, the two having met in The Megson Band in 2016.

What a privilege to be up close to such marvellous musicians.

Let's set the scene: most of the audience had not yet seen this duo live. As their album is just out, most of the audience hadn't heard any of the all original set & those that had, had heard approximately three songs. Not necessarily the most obvious recipe for a gig to work successfully from the start, with an assumption that those watching would need to acclimatise themselves to brand new music. Yet it was not so. Each song was greeted with rapturous & prolonged applause despite being previously unknown. Not one, but three songs involved audience singing & despite none of us knowing the words beforehand nor the band giving us rehearsals before hand, that worked great & added to the sense of community so evident in the whole affair.

John & Cliff don't seem to believe in barriers between audience & band and the warmth of rapport between them & the audience was only exceeded by that between each other. Rarely have I seen a band enjoy themselves so much, though interestingly I used the word "playful" about the Jazz Apples in a review of their gig at the same venue last week & I see the same element in Ward & Parker. Maybe it is something the venue enhances in its intimacy but it must also be inherent in such musicians with not just high skill levels but such a wonderful approach to their craft & a love of it.

I suppose like many of you reading this, the assumption of an evening of folk music was the expectation. I honestly cannot use that term much, despite the pedigrees of John & Cliff. Very few of the songs seemed to fit the genre snugly: it was the third number before Cliff sung in what I'd call anything like a traditional folk style. Every song while infectious & memorable was actually much more complex, switching styles multiple times throughout their courses: from time to time little echoes of various genres and other artists would float out: a lot of jazzy elements, classical bass, one song went very bossa nova, I heard bits of Herbie Flowers in one number, a couple were even close to rock (such as "Stand Together"). Was Paul Simon being channelled for that moment? Here's a bit of a Spanish vibe.

Long time John Parker fans will not be remotely surprised by his constant switching between bowing & plucking, nor I imagine by the myriad other ways he finds to play: percussive techniques all over his instrument to get different sounds & something which I can only describe as "stand up bass harmonics". Such fans will delight in his frequent revival of his renowned human beatboxing but I think I speak for many in being astounded by how much singing he did (not something one expects): mainly harmonies but on the encore something akin to lead vocals...

Cliff took the vast majority of the lead vocals & the songs come from all phases of his songwriting career from the very early to the recently written "Hummingbird". His guitar playing was interesting to watch: busy hands using a variety of techniques (never seen anyone play so much that high up the neck of an acoustic) and plenty of tasteful lead runs of various styles. The subjects were explained to us & while many lyrics pretty much spoke for themselves, (e.g. "Make A Vow") a common thread was as noted, humour & humanity.

I suggest that you listen out for both the new album & current single "Feels So Right" & recommend catching them live too.

If you missed last night, you can catch Ward ‘n' Parker in Leamington,  indeed at the same venue, on October 4th.

You can also catch John in town  with the previously mentioned Mechanicals Band later this month on Sunday 31st March  & with another of his collaborations, Burning Salt (which also features songwriter/guitarist/singer Hannah Hull & guitarist Bobby Williams)  on 4th May (both again at the Magic Lantern).

Well here I am again, this time reviewing not one but two artists on whom I fear I may have already used up my supply of appropriate superlatives in ...
[3 images] END_OF_DOCUMENT_TOKEN_TO_BE_REPLACED