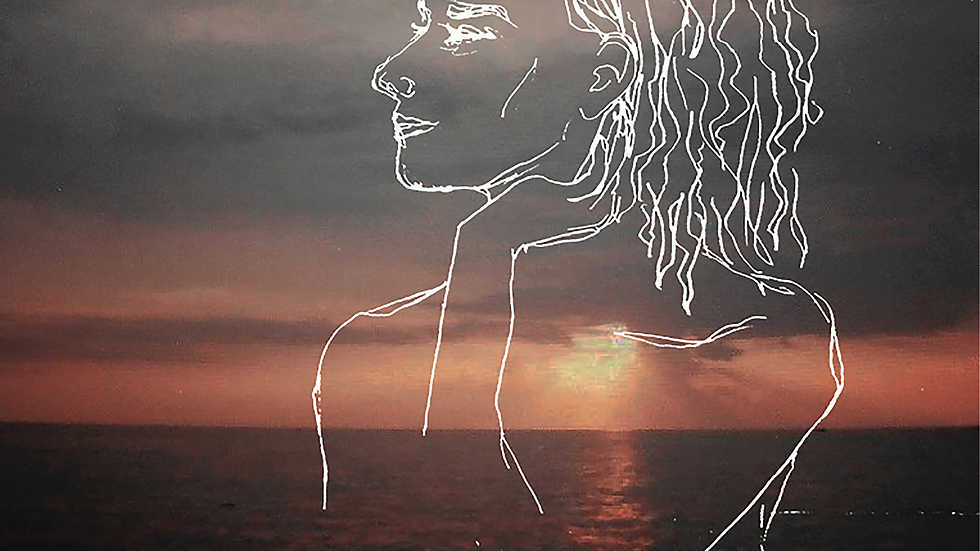 I suppose that a very traditional & perhaps sometimes overlooked route to discovering new favourite music is by going to see an artist you admire & check out their support act (whom you have never previously seen) and getting hooked on them too.

So it was with me when I went to see Taylor-Louise at the Magic Lantern (see my review of 10th February) and discovered the work of Naomi Beth.

Her set was certainly as stunning as I hope my review adequately captured, and based as it was around her "Parallel Lines" EP (of the three songs I singled out for especial mention in my review, two were from this release & the third is a recent composition), I am really pleased now to be able to review it.

My response at the gig was far from limited to me: by considerable public demand, Naomi Beth was requested to return to the Magic Lantern as a headliner, which she has kindly agreed to do on Saturday 13th April. You can also hear her being interviewed by Toni Peach on HillzFM between 2 & 3 on Monday 11th March.

This is an artist of many interests & talents: a poet (how can that not help write great lyrics), a dancer and as she puts it herself in her blog (do read it) "with a passion for mental health and empowerment". Listening to her songs, although one obviously enjoys them for their own merits, I think it is helpful to have this broader context in mind too (as I did), so I've raised the issue with you before exploring each track.

As I also stated in the live review, in terms of performance, the key element is her beautiful voice: there is excellent instrumental (guitar) accompaniment, but it is essentially accompaniment and offers a framing for the singing which I find wholly appropriate. As you might guess from my opening remarks, there is a quality of apparent vulnerability throughout, but that is probably more to do with the nature of Naomi Beth's voice: I'm not sure, given the lyrics, that one should read it as being a deliberate voicing of a state of mind. Equally I'm going to dispense with the term "fragility" straight away. If you possess a clear high voice which floats & soars above the arrangements, it is a term you may have applied to you: I just don't necessity think that she is herself fragile (I detect much steel) although describing fragility from an objective perspective at times. It's never wise to assume singers are always singing in the first person....

And so to the songs themselves. The title track was one of those which hit me at her gig. A really well constructed & delivered piece, which if one had to pick a "single" off the EP, might be the one. I imagine that the lyric has a personal genesis but as all good songs of this nature do, has been fashioned to have universal applicability. Well it resonated with me at the first hearing.

"As Days Go By" sounds very different (if you didn't manage to read the afore mentioned review, I noted how she has an approach of changing her guitar technique for different songs: a subtle idea but it does work really well in terms of producing variety of sound without massive changes in instrumentation.

"Honest Love" is another sort of song again: almost pastoral in tone yet lyrically a mixture of confessional, philosophical & emphasising both the uncertainties of love & the need to see it as a journey rather than a fixed state.

"Humans" expresses more philosophical insights but given the pace (it's the nearest track on the EP to a dance song) and urgency of both singing & playing, it is more of a plea from Naomi Beth advocating action rather than just musing...

Finally (and I've left it to last deliberately) is another of those which hit me at my initial hearing: "Run" & I'll state right away that hearing it again just reinforces its impact. Much longer than any other song (over seven minutes), it sort of reminds me of those long compelling tracks Dylan tended to place at the ends of his albums (not that this sounds remotely like him): propelled by a hypnotic beat & riff which cling to my mind like all great epic songs, despite its length leaves you wanting more.

After the success of my recent features on Ian Todd & Chloë Boehm, here is another one I think you'll find interesting & I think topical.
[2 images] END_OF_DOCUMENT_TOKEN_TO_BE_REPLACED

Naomi Beth at the Magic Lantern

This gig was, for me & I know many others (the venue was packed), including the star, an eagerly anticipated one.
[3 images] END_OF_DOCUMENT_TOKEN_TO_BE_REPLACED