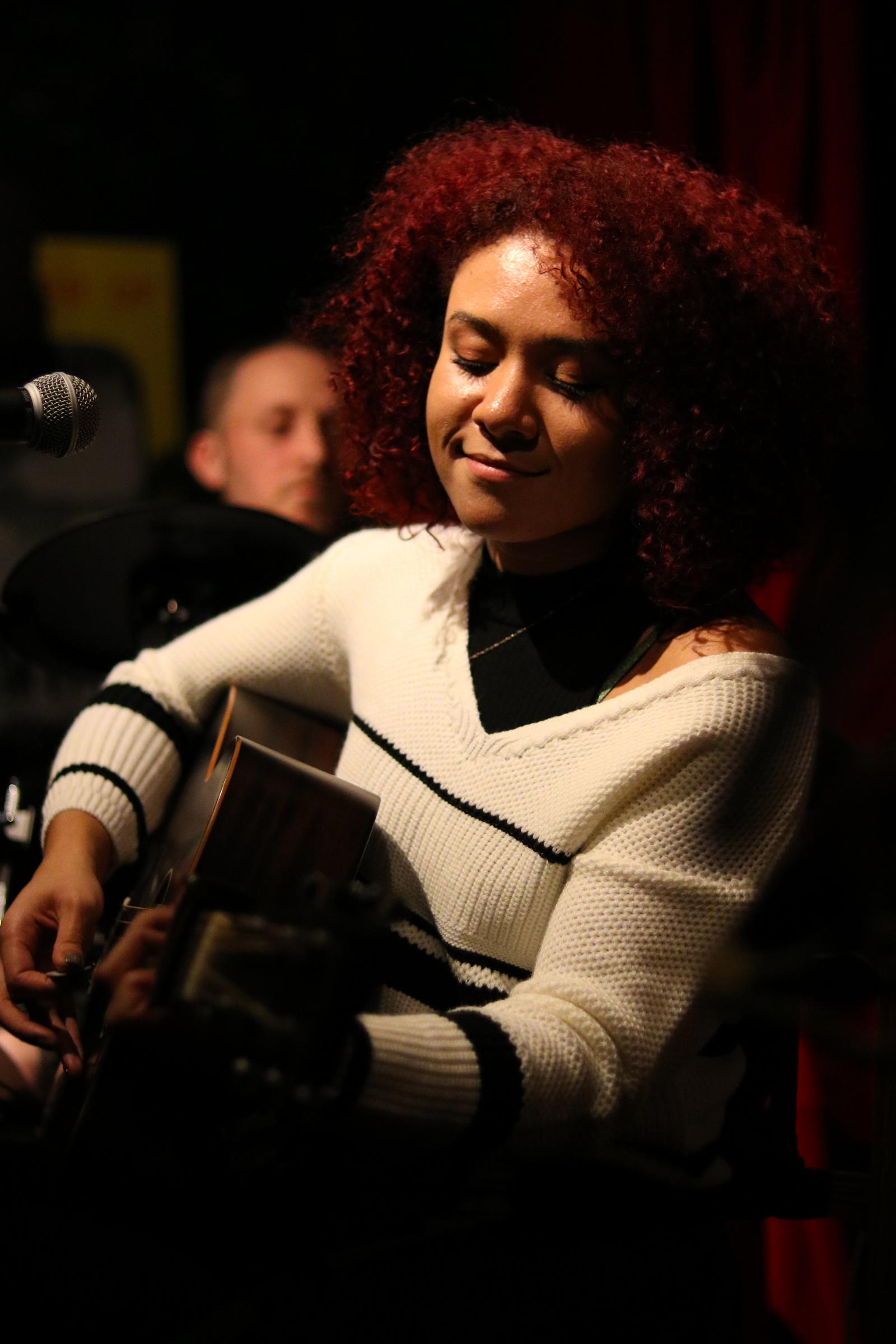 What a treat last evening at the Magic Lantern venue at Temperance. Three sets: one by Naomi-Beth (whom I had not previously heard) and not one but two by Taylor-Louise.

All three sets were dominated not just by the skill & commitment of the artists' performances but by their songwriting talent: original compositions outnumbered covers by a significant amount. It is delightful that comments I made in my interview with Paul Englefield which appeared in this magazine a few days ago were evidenced by tonight's gig: we are blessed with so many distinctive & original writing voices locally at the moment: I urge you to check them out.

Yes there were similarities: gender & use of acoustic guitar obviously & a pleasing approach by both to write what were clearly very personal songs (each was excellent at talking about their compositions) but which however were presented so as to appeal to universal experiences of the audiences too.  Both wear their lyrical hearts on the sleeve & are courageous & candid at articulating their deeper feelings. Beyond that, the artists complemented each other rather than offering a homogenous experience. Their singing voices are distinct (Naomi-Beth excelling in the higher registers while Taylor-Louise has a very powerful range with especial character at the lower end) but so are their writing styles: as I said to Paul, we are fortunate to have writers around whose work is recognisable and individual.

It's always a joy to experience talent not previously encountered & people are certainly saying how wonderful recent support acts at the Magic Lantern have been (e.g. Hannah Woof or Chris Tye). Naomi-Beth has, as noted, a great set of her own material & a beautiful high clear voice which she accompanies on her guitar: although I noted that while she employed quite a lot of different playing techniques to offer variety throughout the set, more often than not her playing is quite quiet or dropped out altogether: the focus is definitely on her voice: rightly I think. All her originals were great but to justify my role as critic, I offer especial personal favourites as "Parallel Lines" (the title track of her current EP), "Run" and the brand new "In the End". Confessing a little initial trepidation, it was noticeable how she quickly drew confidence from the audience's reaction & soared. Interestingly, her one cover was "Sweet Child O'Mine" but in a very different arrangement to the original: very much in the folk idiom. As I've previously noted the very interesting, almost kletzmer, version of the song which Holly Hewitt & David Page often perform, it's odd how two artists in one town should rearrange such a classic in completely original, effective & contrasting styles.

Check Naomi Beth out on Spotify & YouTube but especially her on her own website where you can also learn about the many other aspects of her talents & interests including poetry, education, empowerment & mental health https://www.naomibethjourney.com/?fbclid=IwAR2Q3C0eEx5dA4mSuk3Cfj5Cf54u0rWedkK_4zhDkaZXnO3-r1J05zJcq1Q

This is a multi-faceted artist & one whom I am glad I have encountered. I look forward to hearing more.

What can one say about Taylor-Louise which hasn't been said before (not least by me)? Well for one thing, what a delight to be present for such a set, so filled with her brilliant original songs (so much so that she didn't have space for some of my favourites), several getting their very first public performance ever (thank you!) and others receiving a rare live outing. The venue really suited Taylor-Louise's style & commitment. I had heard several songs in outdoor settings & loved them but the effect of bringing them indoors to such an intimate setting took them to a whole new level of intensity. Anyone who can start a set with a song as strong as "Twenty-Three" surely has a powerful body of work. Indeed it's remarkable that although her work clearly goes from strength to strength, even a song written when she was 13 ("Jealous Eyes") is still a really valid part of the set: what a prodigy!

Interestingly, given my comment about Naomi-Beth's reworking of a cover, Taylor-Louise's explanation of her general approach to covers is intriguing. She told us how she concentrates on the words & music of the song she likes & develops her own version without necessarily drawing on the arrangement nor approach of the original performance: not, I would think, the usual method of many artists.

So what of the new material, aired specially last night? Well I defy anyone once you've heard "Black Heart" to get it out of your heads. You'll going to love it & Taylor-Louise is deliberately holding back "Gone" for summer 2019 given the vibe she detects in it. I told you that her writing just gets better & better. In naming standout songs I'd also like to cite the exquisite but rarely performed "Pieces" , the incredible piece of writing which is "Generation Now" (another you'll love), the upcoming single "Blessed With A Curse" and in a nod for "Hot Music Live Presents" track "Put Into Words" also made a welcome appearance. The final song (apart from the several encores demanded by the enthusiastic & packed audience) was the newest composition of all, "Found My Fight", a manifesto for Taylor-Louise's relationship with music.

As with Naomi-Beth, there was (apparently: it certainly wasn't detectable in the performance), some concern initially as although Taylor-Louise has played with drummer Kev Stanley for a long time, she was working with a new guitarist (the sensational Tom Gedney) she had only met a fortnight earlier & the opportunities to rehearse sounded very limited. They really need not have worried! The playing was excellent with Tom adding beautiful filigree lines to Taylor-Louise's songs, even on the ones he had only rehearsed once: or in one case, not at all. I also really liked how Taylor-Louise's voice, while wonderful in "normal' mode is periodically let off the leash for maximum power & effect: a deployment she uses with restraint & is all the more effective for it.

What a night for sure.

It's been quite a while since I had the pleasure of reviewing a Taylor-Louise release: in fact it was about eighteen months ago when the title ...
[1 image] END_OF_DOCUMENT_TOKEN_TO_BE_REPLACED

What a fiesta of an evening on Friday at St Patrick's Club in Leamington.
[3 images] END_OF_DOCUMENT_TOKEN_TO_BE_REPLACED

If you are counting, you'll have spotted that the new single "Gone" is the third single to be released from Taylor-Louise's stunning "Black ...
[1 image] END_OF_DOCUMENT_TOKEN_TO_BE_REPLACED

When is "easy listening" not easy listening?Possibly when it is one of those quite rare songwriting approaches where the composer deliberately ...
[1 image] END_OF_DOCUMENT_TOKEN_TO_BE_REPLACED

Well here I am again, this time reviewing not one but two artists on whom I fear I may have already used up my supply of appropriate superlatives in ...
[3 images] END_OF_DOCUMENT_TOKEN_TO_BE_REPLACED