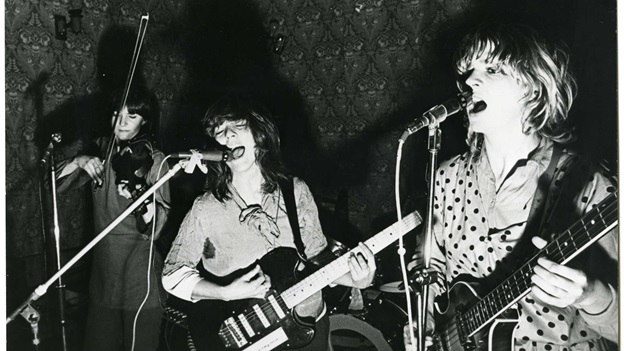 When the full horrors of the behaviours which got tagged as #MeToo began to become apparent last year, like many others I was appalled to hear specific stories from women friends: stories I had never heard from people I greatly respected. At first I didn't know what to say: what words could adequately reflect my feelings? I certainly didn't know what to do, though I felt I needed to do something. Some of these confidants were musicians & while it wasn't unexpected to learn of misogyny in those circles, the scale was a shock.

I took part in many discussions in the next few months: many too confidential to ever share, but some attempted to move towards some form of collective response. Some took place under the umbrella of "Hot Music Live" and its community & if like me you are enjoying the great features & profiles on women musicians (among other subjects) which Holly Hewitt has been writing, then I think it's fair to say that that is one aspect of a response.

For my part, I was aware that Gina Birch & Helen Reddington had made a film about the experiences of female musicians in the punk era, when there was a significant shift in the opportunities for women to be seen as instrumentalists & writers as well as the singing roles they had rather been limited to: though of course as they say, the music histories of that era still tend to be male orientated.

They have been showing their film ""Stories from the She Punks" in many locations & it has been sparking debate & discussion afterwards. It certainly occurred to me that this would be a useful focus for our area: to show the film and have a discussion afterwards on the experiences of local women musicians.

I am delighted that we have managed to arrange this for 2 pm on Saturday the 11th May at the Magic Lantern venue at Temperance in Leamington. Helen will show their film & then lead such a discussion. I do hope that as many people as possible who have an interest in these issues can attend.

Tickets are £5 and can be obtained from this link:

The venue has limited capacity so early booking is advisable.

Helen is performing the previous night at the Tin in Coventry & I hope that as many people as possible who are interested in the film can support that too: it will be a cracking night with a splendid artist and as you may imagine, the only reason we could manage the logistics of the film showing was in conjunction with a local gig for her on her Spring 2019 national tour.

Details & tickets for Helen's gig at the Tin can be found here:

The film itself reflects all the anarchy, the excitement of  new sounds upsetting British music, and a DIY approach to learning and playing instruments.  We meet Shanne Bradley who was taught to play bass on top of a 68 bus by the Damned's Captain Sensible, and the Dolly Mixtures, who pretended they were at each other's houses doing their homework, while in reality playing a gig at Cambridge Corn Exchange. Gina describes the thrill of buying her first bass guitar after seeing the Slits play and struggling to teach herself to play. These women describe an alternative to the alternative world of punk all too often remembered from a male perspective.

Gina  went  to London to study Fine Art in 1976, fell in love with the DIY scene that was punk and after seeing the first Slits gig was inspired to buy a bass guitar and together with Ana da Silva, started the Raincoats (one of Kurt Cobain's favourite bands: he & Sonic Youth's Kim Gordon wrote the liner notes for their reissued albums). Armed with a bass guitar and a super-8 camera, Gina has  made music and films for the last 40 years, and is  also a committed painter.

Helen was at Brighton Art College when fellow-squatters told her she would be playing bass in their punk band. Joby and the Hooligans never made any records, but Helen went on to form the Chefs, who released material on local label Attrix and recorded sessions for Radio One's John Peel Show and later formed the much loved Helen & the Horns. After working as a community musician, she became an academic, publishing The Lost Women of Rock Music: female musicians of the punk era (Equinox) and lecturing at the University of East London. She also tours as a solo artist under the name Helen McCookerybook, releasing DIY albums herself

Well here I am again, this time reviewing not one but two artists on whom I fear I may have already used up my supply of appropriate superlatives in ...
[3 images] END_OF_DOCUMENT_TOKEN_TO_BE_REPLACED