"The Tourist" by Man Made Moon 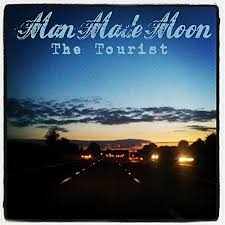 One particular joy in writing reviews for "Hot Music Live" is that it almost certainly introduces me to artists unknown to me at a swifter rate than would otherwise be the case if nature took her normal course. In this instance, although I was aware of the Leamington band Man Made Moon & knew that people such as BBC Introducing & HillzFM's Paul Sanders rated them, they were not as visible on my radar as they ought to have been. This has now been partially put right & it is a pleasure to be able to review their 2018 Chicken Shed Records produced EP "The Tourist". Man Made Moon (who comprise Ben Taylor (vocals & rhythm guitar), Colin Bean (drums & percussion), Nick Mew (guitar), Ian Black (lead guitar) and Gary Ryan (bass)) came together in 2015 released their debut single ‘Lets Grow Old Together' on Valentine's Day 2016, and followed this up with ‘Not so Haunted' at Halloween 2016 (I think we might perceive a connection in the release dates!) both of which feature on this EP too.

I should also like to thank the band for offering us one of the tracks on the EP for a second volume of "Hot Music Live Presents": welcome aboard!

First up is the title track, a melodic, slightly world weary acoustic tune (the protagonist seems to be a "tourist" in the same semi-alienated way as that of the Gang of Four classic) with a slight Tom Petty vibe but with the sound also reminding me a little of Barenaked Ladies (both comparisons very much intended as compliments)

I have never heard such a deep bass part to an acoustic song which certainly adds distinction & I like how the arrangement grows throughout ending with a brass section, harmonica & vocal harmonies having joined the party

"Bones of Love" in distinction to its predecessor opens straightaway with a fuller arrangement & a more "electric" approach. In fact it sounds very little like the previous track, though I suppose there may be an underlying theme running through the whole EP of a form of existential "tourism": think Camus. If not intended, then it's a fine accidental theme.

"The Long Way Home" continues the existential musing switches back to acoustic troubadour mode while the bass prowls underneath. For some reason it evoked "Wish You Were Here" sort of Pink Floyd....

"Let's Grow Old Together" enters the sort of territory John Lennon explored later in his career as regards subject matter (though from the viewpoint of a younger narrator). One might imagine Neil Young singing it in one of his more tender moments.

"Not So Haunted" doubles back to a more electrified approach & features the most prominent use of the drumkit on the EP and shows how the band can rock out as part of their repertoire: in terms of "Hot Music Live Presents Volume Two"'s projected tracklisting, my personal feeling is that this track might represent Man Made Moon rather nicely.

All five songs catch the imagination on a first listen & demonstrate imagination & freshness in terms of writing ability. I admit to not having caught them live yet (my loss: I seemed to have missed them at events such as Leamington Peace Festival, Napton Festival and Warwick Beer Festival) and that's something I look forward to putting right but on this evidence, they have the material to appeal to audiences. I gather that live appearances for 2019 are being planned as I write.

These five songs do offer a good portrait of a band with variety up their collective sleeve albeit with a good clear aural identity. However as regular readers will have read (too often?) in previous reviews of mine, I do appreciate artists with the confidence to leave space in their arrangements to let the songs breathe & to permit impact. Man Made Moon certainly demonstrate that on these songs & with so many members, it can't always be easy to leave instruments out.

The band are currently back in the recording studio recording their second EP  and I for one look forward to hearing that & reviewing it in 2019.

I'm really pleased today to be able to review the brand new single from Man Made Moon called  "Where The Stars Fall": my first since ...
[1 image] END_OF_DOCUMENT_TOKEN_TO_BE_REPLACED

Here I go again: another evening spent in the company of really talented musicians who not only perform in a way that touches my soul but objectively ...
[2 images] END_OF_DOCUMENT_TOKEN_TO_BE_REPLACED

Isn't the artwork for the new Man Made Moon single "Weightless" great?  You'll be pleased to hear that the musical content rises to the ...
[1 image] END_OF_DOCUMENT_TOKEN_TO_BE_REPLACED